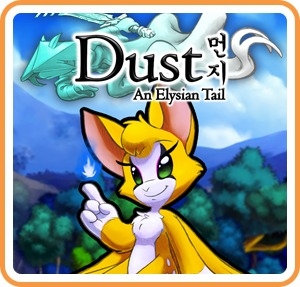 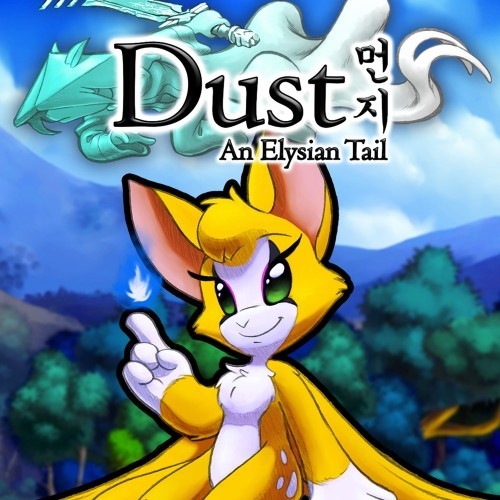 ''Ashes to Ashes,Dust To Dust''

Dust: An Elysian Tail is an action adventure platformer developed and published by Humble Hearts/Humble Hearts LLC. Play as a mysterious man,Dust,a warrior with a forgotten past who seeks to find answers to his true identity and purpose.

Dust awakens one day with no memory of where he is,how he got here or even what his name is. Before he gets the chance to figure it out himself, a magical and powerful blade begins to speak to him. It is the Blade Of Ahrah,a talking blade with mystical powers that now only you as its chosen one,can begin to wield. Ahrah tells you of a journey you must take,but not before you get interrupted by the guardian of the blade herself,Fidget. Bound by being guardian of the blade, she has no choice but to join you in your journey for answers and it is up to the three of you to figure out not only who Dust really is,but to save the world from the recent uprising of monsters.

Dust: An Elysian tail is an action platformer at heart with beat em up game play also thrown in the mix. Your main character of choice is the warrior known as Dust,who'm is the only one powerful enough to wield a mystery blade known as Ahrah. With the blade of Ahrah, you are able to take control of the abilities and skills of all people have wielded the weapon before you, as well as embed new abilities into it from fallen foes.

The combat in the game operates on a combination system as any hack n slash or beat em up does. Your main form of attack is a traditional melee attack that allows you to slice and dice your enemies all around, while a secondary attack is done by holding down the X button to spin your weapon in a circle and do damage that way. But the kicker here is if you use the spin attack too long, it will have a negative effect on you and injure you. To be honest I do not like when games do this, but it never really became a problem for me, so it get's a pass!

The spin attack also has other uses besides just being a good way to quickly hit enemies, when jumping and using the spin attack it also allows you to momentarily fly through the air and can even make you fly higher distances if there's an enemy at a higher platform or flying in the air to give you a boost via a chain attack skill.  Your partner Fidget also is able to use her powers,a white aura like attack she sends out like bullets, to help you in battle by combining that attack with your spin move,sending a whole screen of white aura attacks all over,damaging every enemy on the screen for a limited amount of time. This move is just awesome, my favorite combo in the game to use.

Of course, the game has to go and say ''Hey, I think im good now, so to be a wise guy im going to just add rpg elements too''. Yes, that is indeed true, this game does have some rpg elements in it. In Dust for every enemy you kill you will get a varied amount of exp depending on how many enemies you kill in a combination chain. The higher the combination chain, the more experience points you will obtain. Once you've gotten enough skill points, your character will gain a level up and raise the characters stats up per level you gain. Grinding is also possible if you wish to over level yourself too, simply zone out and zone back into your area and all bad guys will respawn automatically. Take that enemies, you're getting the ol Sabaku Kyuu!

Since you're going to be going up against hoards of enemies which sometimes range from one or two on the screen to seven or eight at a time, then you're going to need to equip some items and armor that you pick up or buy along your journey. As you explore all the areas of the game, you will get drops of items,money,and armor can can be equipped at any time, so make sure you stock up on healing foods that can range from giving you 20% health back, all the way up to 80%. A great thing about this game is sometimes using your items in the heat of the battle might be too distracting and might even get you killed,however, the developers offer you a chance to be able to turn on ''auto-heal'', so the game automatically uses a health item by itself whenever it notices you getting low on health. Now that's just awesome.

The enemy variety  in this game starts off rather slim and mundane, so please do not get discouraged early on in the first chapter or so if you notice you're fighting most of the same enemies, this will soon change. Once you get past the first chapter, the enemy variety begins to broaden from the walking frog like monsters you saw all through chapter 1, to flying star fish,flying electric jelly fish who shoot lighting,giant troll monsters,poison spitting plants,etc etc. This is not even all the stuff you encounter,but you get the idea of how many different types of enemies you will go up against, so be prepared because its never a dull moment.

The game isn't too long of a game, your average play through without doing all the side quests and just going through the main story will probably take you around 8-10hrs to complete. But that changes to 13-15hrs+ if you decided to take on every side quest in the game given to you by the npc's in the game. My review here is based off the main story playthrough alone, I will go back later on and 100% complete everything I can, I must do this for myself to feel proud!

In Dust you will go through many different areas,ranging from caves,to forests,snow mountains and many other locations. This game starts off as a linear adventure and nearly every early level its your job to go left and right like a side scroller in order to achieve you objective and beat the stage. But that changes later as the levels seem to expand beyond the side scrolling game play and mix it up with more emphasis on exploration. Once the levels open up for exploration, you're able to deviate from the main path and drop down below platforms,use items to expose hidden walls and search for treasure chests that can hide blue prints for items or stacks of money to help you on your journey. Search for every secret in each level will take time and effort, but I assure you,its well worth it.

These are the last two subjects id like to give my input on before getting to my final thoughts. The graphics in this game is absolutely beautiful. This entire game is hand painted and it's extremely well animated. I had to stop and just look around and admire all the work that went into the art design of this game because it genuinely took me by surprise, in a positive way. You can't get much prettier than what's offered here.

In regards to the sound in this game, if you've read my past reviews, you know shoddy or lackluster voice acting can get on my nerves and I make no secret of my views in regards to this subject. But Dust seems to break my track record here and comes through with great voice acting on top of great game play and great graphic design. Each voice fit their character completely and sounds great. You never get the sense of anyone just honing in a performance and you genuinely get the feeling that they're engaged completely in this project.  I never wanted to skip any cut scene at all in the game and listened to it all with pleasure.

At the end of my time with Dust: An Elysian Tail, I came out of it entertained. It's one of those rare times after beating a game you sit back and just say ''man that was really fun''.  The game offers fans of action platforms a great variety in game play with an addicting combination system,splitting paths for secrets,engaging story,solid voice acting and amazing art design. I legit can't think of any one thing that I got mad at or had issue with in this game that I would consider a negative on it.  It's simply a must have as a Nintendo Switch owner, so if you like this genre, go out and give this one a shot. You will thank me later.

Dust: An Elysian Tail is out now on Nintendo Switch