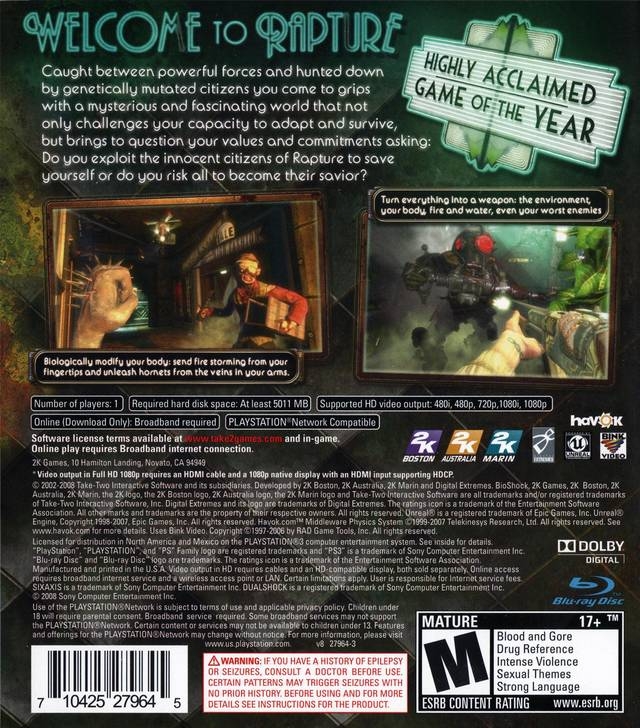 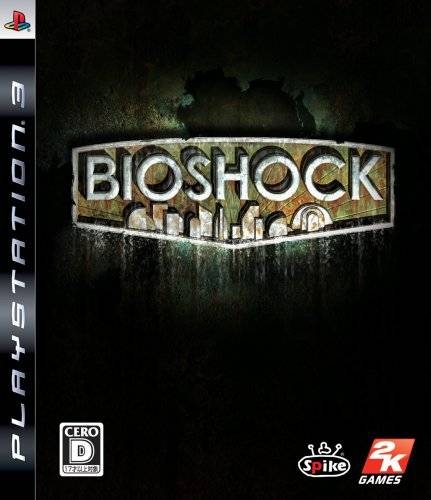 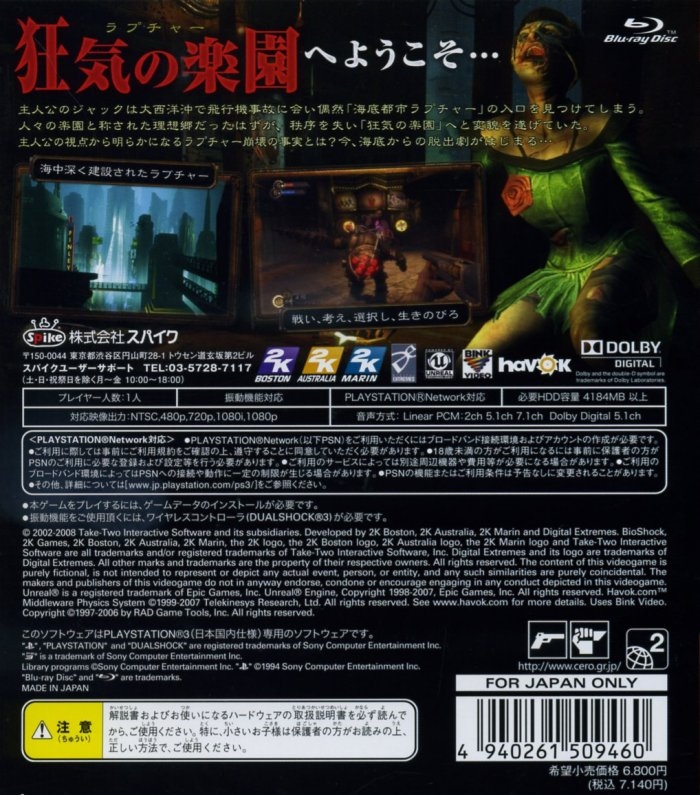 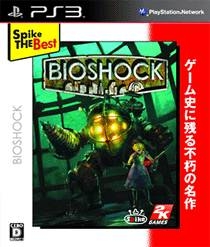 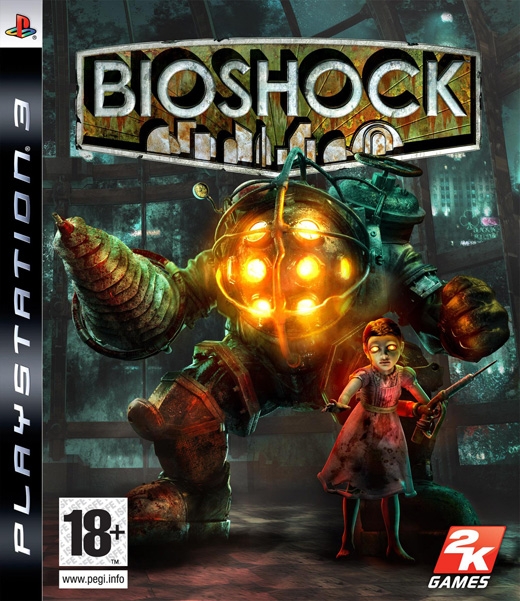 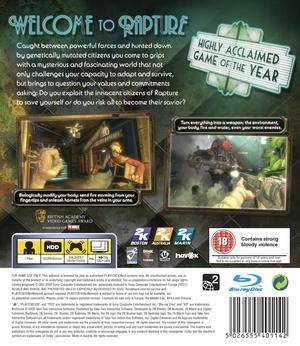 Your plane crashes into the ocean in the 1960s. In the distance you see a towering building which resembles a lighthouse in the middle of the ocean, and swim towards it. Underneath that building you discover Rapture, a city hidden beneath the sea. Created by Andrew Ryan, a brilliant entrepreneur and politician, the city was once a glorious refuge for the greatest scientists, industrialists and thinkers in the world. This city is now littered with tortured and genetically mutated survivors of the fallout of Ryan’s doomed social experiment. You seek an escape from Rapture as the city falls apart around you, all the while learning of the final moments of the city’s citizens as Ryan’s dream came crashing down around them.

BioShock has an intriguing story, so I won’t reveal any more plot spoilers. Just know that this story is brought to life by great graphics, polished presentation and, most of all, a well realised atmosphere. You get the ‘feel’ of Rapture - the drips of water create the feel of a city which is crumbling all around you, the tortured residents who prowl the corridors mumbling to themselves have their own personalities and traits, adding a sense of corrupting life to the game. All of these little details create the atmosphere and feel of a living, yet at the same time, decaying city.

Sound plays an important role in creating that believable world. In the distance you’ll hear the city’s walls creaking and groaning under the pressures of the ocean. The sound effects are great – you’ll hear clinking on pipes, the strained lumbering of the giant Big Daddies, the quietly sinister musings of the Little Sisters, and even married Splicers arguing. The voice acting is strong as well, particularly the voice of Andrew Ryan, whose political rants are infused with so much passion, contempt and, in many ways, common sense that he becomes more than just another gaming villain.

The city of Rapture looks stunning, as you progress through the game you come across different parts of the city and each part has a different look and atmosphere. This certainly helps to keep the game fresh. Despite what I had heard being reported there’s little to choose between the PS3 and 360 versions with regards to the graphics, so unless you have them side-by-side you’re unlikely to notice much of a difference. Both are beautiful, although both also have a common problem. It doesn’t happen often but sometimes you’ll clearly see an item on the ground but will be unable to pick it up – it’s a minor annoyance but it’s still present and it’s worth noting.

The art style is excellent too. There’s certainly a 1950s/1960s feel to Rapture, but it’s been lovingly redesigned to reflect the differences between Rapture and the real world – it’s almost an alternate timeline. You can see this in everything from the furniture, to the posters, signs and even the music. A lot of thought has clearly been put into the design of Rapture and it works well.

BioShock is, at heart, a first person shooter set in the 1960s. Yet this more scientifically advanced 1960s setting allows the game to introduce interesting twists to your average weaponry – different weapons can be upgraded in different ways. Innovative weapons are also introduced later on in the game that were never realised in the ‘real’ world, but in Rapture this never feels unrealistic given that Ryan’s neo-liberal political philosophy has allowed for scientific advancements prohibited in the world above the sea.

These scientific advancements are most vividly seen through the use of genetic manipulation. With your right hand you control your more conventional weaponry (a pistol, shotgun, grenade launcher etc.) but your left hand is reserved for plasmids. Plasmids are genetic enhancements acquired by your character that allow you to perform magical attacks, such as electrocuting your attackers, setting them on fire or even converting them to fight their own allies. There are 10s, probably 100s of these plasmids in the game, each one allows you to perform a different ability, and each one introduces a new element of strategy to the game. It’s possible to rush through the game using just a handful of these weapons and plasmids but there is much enjoyment to be had mixing up different combinations of weapons and plasmids to defeat your enemies, particularly on the hardest difficulty setting when you’ll want to line up a series of traps and heavy hitting attacks before taking on the Big Daddies.  On top of the weapons and the plasmids are tonics, which basically act as bonus passive enhancements to your character or your attacks.

Those Big Daddies I mentioned (and shown in these screenshots) are a sort of mini-boss. Within each stage you’ll encounter 2 or 3 of these Big Daddies, but they won’t attack you. They lumber around waking up the Little Sisters who appear to reside behind the walls of the city. The Big Daddies escort and protect these Little Sisters - corrupted girls who creep around the hallways looking for bodies to harvest. The game encourages you to take on these Big Daddies, but you’re never forced to. If you choose to fight a Big Daddy and manage to win, then the Little Sister will be yours to harvest for resources or rescue – the choice is yours.

If there’s one major problem I have with BioShock it’s that if you die there is little penalty. You just respawn at the nearest Vita-Chamber (checkpoint) with a small amount of health and Eve (mana). That in itself isn’t a problem, but enemies don’t reset, they retain the same levels of health they had when you died. This can make the game frustratingly easy in a way because, to use an extreme example, you could kill a Big Daddy using the most basic weapon in the game (the wrench). No matter how many times you die the Big Daddy’s health will only ever go down. Granted, it would take a while, but it does illustrate how lenient the game can be at times. It shouldn’t detract from your overall enjoyment of the game, but it’s not in-keeping with the game’s slightly survival horror-esque tone and it certainly makes the game less challenging than it should be. In a similar vein, there’s also a glitch which allows for more Big Daddy/Little Sister combinations on each level than originally intended, and given the rewards received for harvesting or rescuing Little Sisters it’s another case of the game being slightly too forgiving.

Flying security bots, turrets, vending machines and locked doors/safes are also featured heavily in BioShock. All of them can be manipulated in some form, for example security bots can be hacked and made to fight for you, and vending machines can be hacked to reduce the cost of items. In order to achieve a successful hack you have to complete a mini-game which requires you to align tubes to allow a liquid to flow uninterrupted from one point on the screen to another. The game can become pretty challenging depending on the difficulty assigned to the machine you’re attempting to hack, but fortunately if you find the game too difficult or you’re bored of it, you can simply find or make auto-hacking tools through the item invention system.

It’s appropriate to briefly mention the differences between the PS3 and 360 versions. The PS3 version comes with everything the 360 version has (achievements (in the form of trophies) and the free DLC (already on the disc)), it also includes a brand new Survivor mode, which is essentially an additional difficulty level that makes everything in the game scarcer – from ammo to health and Eve items. However, the main difference is probably the promise of future DLC in the form of Challenge Rooms, to be released later this month on the PS3. But to be honest it doesn’t matter which console you buy BioShock for, it’s an exceptional game.

BioShock is a beautifully written and stunningly realised game with the addictive qualities of the best first person shooters, an epic story that I’ve yet to see bettered in gaming and an atmosphere unrivalled by any game currently available on the PS3 or the 360. BioShock was a rare treat for me - a truly impressive game that lived up to the hype. It's one of the best games available on this generation of consoles.