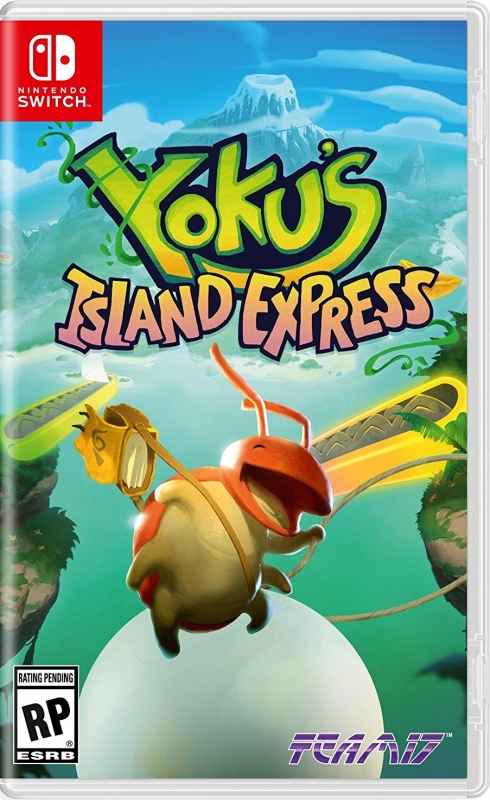 Who thought pinball and bugs could fit so well?

Presentation - 8.0
Gameplay - 7.0
Value - 4.0
Yoku's Island Express is a 2D platformer/pinball made by Villa Gorilla in 2018. A very original idea and a great presentation, it shows a nice game that still further development to be trully great. 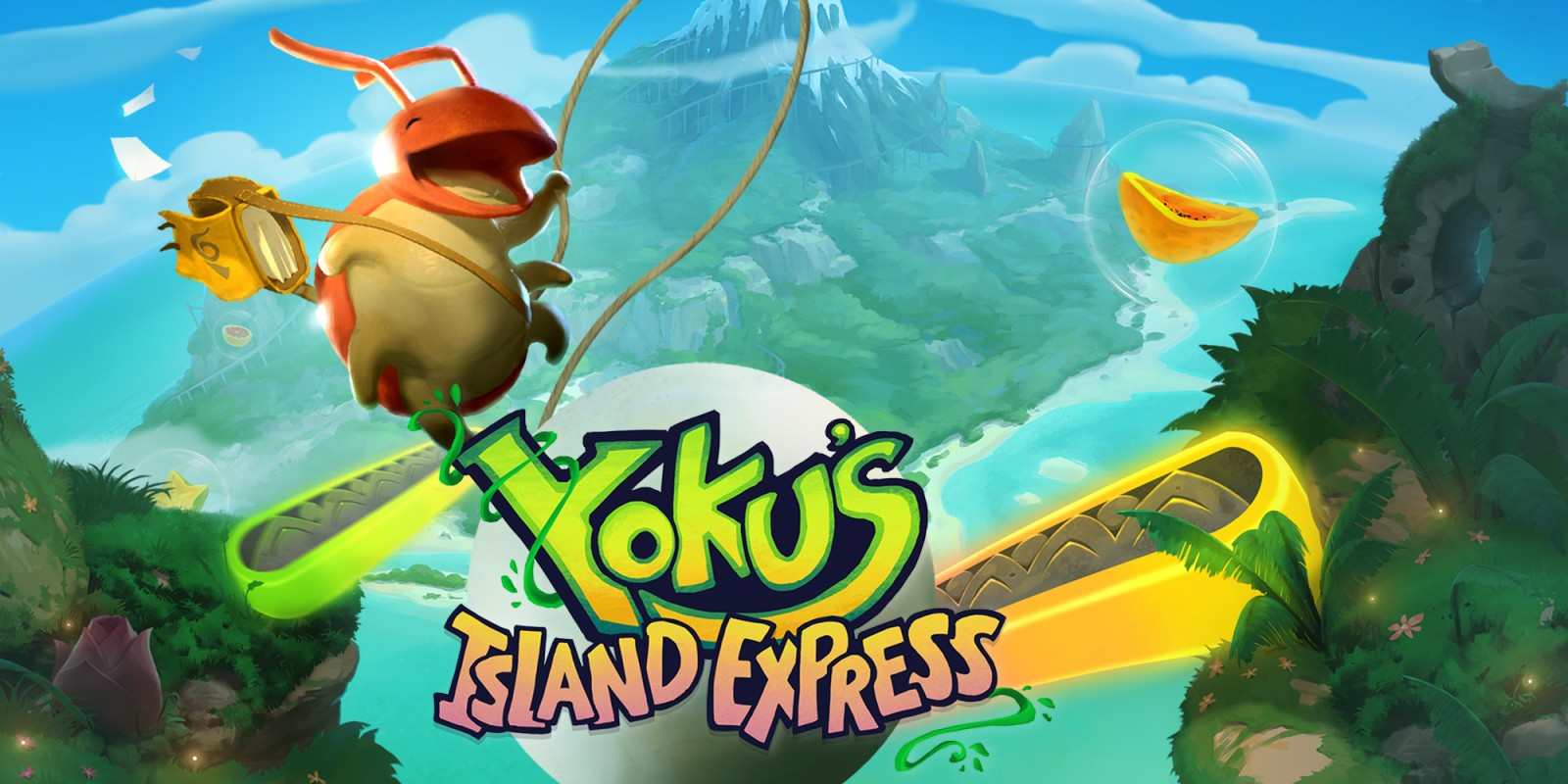 Pinball has had a very interesting story. With roots going as far as the XVIIIth century, Pinball has been a surprisingly constant on modern entertainment, especially after its popularization during the first half of the XXth century, with the creation of the first electrical models and the addition of flippers. The concept of the game was simple enough, keep hitting the ball into as many targets as you can to rack up as high of a score as possible before you lose the ball, and their presentation has carried them out to nowadays. While the popularization of video game arcades took a toll on their popularity, gaming has always represented in gaming. It’s difficult to imagine a platform that hasn’t had at least a couple of pinball videogames, and of course many franchises have had pinball spinoffs. But the interesting thing about pinball in videogames is the room for creativity the digital space offers to innovate and combine it. In a videogame, the limitations of a traditional pinball machine are gone, and as such, developers are able to combine pinball with other genres, such as Yoku's Island Express.

Yoku's Island Express is a pinball/2D platformer made by Villa Gorilla and released in 2018 for the PlayStation 4, the Xbox One, the Nintendo Switch and the PC. The game follows Yoku the Dung Beetle, working as a mail carrier in the tropical island of Mokumana while delivering packages, solving puzzles and uncovering the secrets of the island. The game’s most unique feature is the use of pinball mechanics to travel around and explore the island. The beetle can’t jump on its own, but to compensate for that he’s attached to a small ball, which he can use as a propeller to traverse through the land. This is done by using the many flippers scattered throughout the island. Throughout the game, you will explore the island and cross multiple scenarios where you have to achieve certain objectives while playing what’s essentially a pinball game. This levels are usually very well designed, and while they are not particularly difficult, there is a certain level of challenge if you want to do them perfectly. The game doesn’t really punish you for failing and having to start over, but it counts the times you’ve failed, so at least you have a reminder of improving at the game.

It is easy to compare this game to a metroidvania, since it has a similar structure: a big map to explore, multiple routes you can unlock through either activating bumpers or flippers, emphasis on tool and abilities to use in places you’ve already passed… It fits the bill well, the substitution of precise platforming for precise ball launching turns the game into a very unique experience. Exploration is fun and rewarding, and you will usually find enough secrets and shortcuts to keep you looking around, making your time exploring worthwhile. Though, in my opinion, I would rather compare it as a collectathon. The main character is a mailman, after all, so you’ll be searching for things to take and give to the different islanders, while also gathering collectables. While there aren’t that many things overall, all of the collectables have a use, so it’s not collecting for collecting’s sake: they will either give you special abilities or help you unlock a different ending. Though in both cases the game has to deal with the same issue: its scale.

It’s not a problem of lack of content per se, the game is obviously an indie project, and it’s a good thing it doesn’t add things for the sake of having them and ending up bloated. However, the game really should have benefited from having more stuff to do. Maybe a longer storyline would have helped more, or more sidequests, something that keeps the player going. Gathering all of the collectables is fine and all, but after a while what keeps you going is meatier content. Maybe I feel that way because of the map. The world’s size is similar to other 2D metroidvanias, and just like in many of them there’s a lot of backtracking, but in this game, to cross from one point to another you will likely have to go through multiple pinball levels. Levels that you’ve already played, so after the third or fourth time you go around the island, you’ve gone through the same stages over and over again, which gives you the impression of going in circles and slows down the game a lot. More varied pinball stages and a way to avoid repeating the ones already completed so many times would have been appreciated. Maybe if you’re able to complete the level without failing once it automatically unlocks the path for the rest of the playthrough, which would be a good way to incentivise improving at the game. More bosses would have also helped, the ones in the game are great and are a decent challenge, but three bosses in the entire game is not nearly enough.

Which leaves us to the main campaign. While the story is simple enough, it never really has the impact it should. Without spoiling much, there’s some kind of catastrophic event slowly creeping in the island, and the character has to get people to help fix it before it’s too late. Nothing particularly original, but it’s serviceable enough, the focus of the game is in the mechanics and not the story, which is absolutely understandable. The problem comes when the story doesn’t really grab you, it’s not bad, but it lacks either weight to keep you invested or interesting characters to move you along the ride. There’s also a twist at the very end of the game, but if you’ve played any game, you saw it coming a mile away, and the character related to it, while it interacts a lot with the player, doesn’t do it enough (or more precisely, in a meaningful enough way) to really affect the player. The ending is serviceable enough, but the true ending is somehow weaker. After getting all of the most abundant collectable in the game, you unlock a different ending, but it’s really anticlimactic, especially considering the amount of time and effort spent on hunting down every single item to unlock it. The regular ending is much better, even if it’s because you have to beat a pretty entertaining final boss to get it.

The presentation is also a point in favour of this game too. The art style is adorable, with a great use of colour and environment design, going from happy and colourful to dark and eerie. The pinball levels are visually interesting, which they kind of had to be, since pinballs need a lot of visual feedback for the player to know what exactly has to do. Even the character design is also pretty great, with many creatures to talk and interact with (although many of them don’t really have many interesting things to say), it keeps the world feeling alive. The soundtrack is great, being quite soothing and happy, appropriate for the setting, and the sound design really captures the pinball feeling of the game.

Yoku's Island Express is a charming little game, though its big scope and small size ends up mudding the experience up a little bit. Just when I was really enjoying the game, I had unlock every important upgrade and item, the game ends, giving you little chance to use your new toys or apply the lessons you’ve learned. Still, I had a great time with it, and I hope they take this foundation and improve it on a future title.