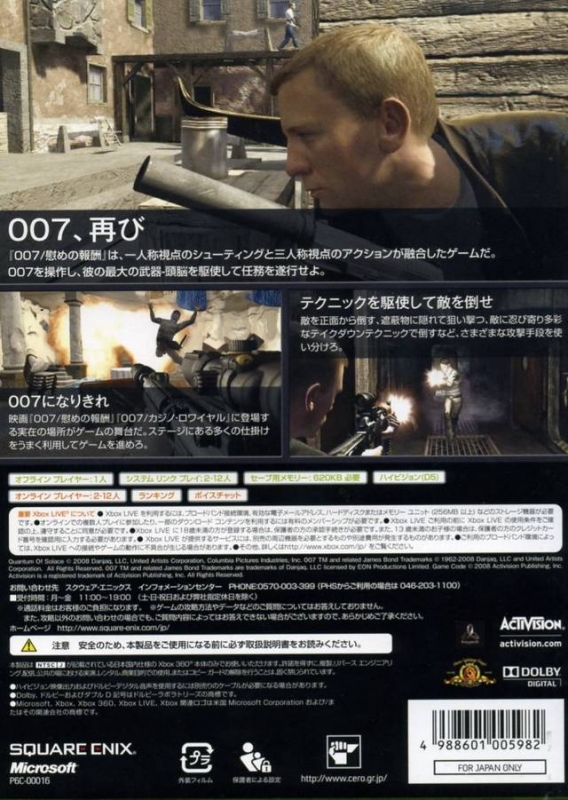 Presentation - 7.8
Gameplay - 8.8
Value - 9.2
A great FPS/third person shooter that has an addicting multiplayer.

When you think of James Bond game, what's the first you're probably going to think of? Goldeneye 007, most likely. It was one of the pioneers for the FPS genre. Then there's Quantum of Solace, the latest James Bond game. Can it finally trump Goldeneye?

STORY
Despite being called Quantum of Solace, the game mostly follows the earlier movie, Casino Royale. It's only the first few missions and the last one that is based on Quantum of Solace. It starts out with Bond capturing a key member of the organization, Quantum. He escapes, so they decide to spy on another member somewhere else. This is eventually leads to a shortened retelling of Casino Royale, and then back to the very end of Quantum of Solace. If you haven't seen either of the movies, there will be spoilers, especially with Casino Royale. The story itself is pretty good, though it's kind of hard to follow.

DESIGN
As with most games nowadays, there is a single player and a multiplayer. I'll start by talking about the single player.

Obviously, you play through the above story. This is told through 15 missions, varying in length for each one. The game itself will take around 6-7 hours to complete, which is kind of short. It is a completely linear journey, but that's not necessarily a bad thing. Along the way, you can try to find various cell phones, which can give you hints on what's coming up next in the mission, and power weapons, which are just awesomely-powerful weapons you wouldn't normally get from enemies. If you feel you are done with the singleplayer, you can hop into the multiplayer.

The MP consists of only around 7 different modes, though they are fun ones. They're the expected deathmatch and team deathmatch, but there's also the favourited Golden Gun, where there is one golden gun, that shoots explosive bullets, in the map. Just try to kill the person holding the gun and pick it up for yourself. Playing these modes, you gain credits, which are used to unlock various weapons, gadgets (perks) and attachtments, as well as golden versions of some gun, which are basically more powerful (and cooler looking). The multiplayer is quite enjoyable, and should keep you playing for a while

GAMEPLAY
Quantum of Solace has an interesting gameplay hook: it's an FPS, but it turns into a third-person shooter when you're in cover. Luckily for you, the transition from first-person to third-person is seamless, and doesn't look wonky. Most of the time, the game will feel like a third-person shooter, as you'll be in cover for the majority of the game. It always feels weird when actually shooting in first-person, as you get so used to shooting in third-person. The actual shooting mechanics work well, which is always a good thing. It's always funny seeing a super accurate blind fire, though. Besides shooting, there's also takedowns. By either tapping the right thumbstick near a guy or sprinting up to him, a QTE will start, which allows you to kill him in one move. The animation changes up, depending on where you start the QTE, which is a nice touch.

Overall, QoS has a cool gameplay hook, and the actual mechanics work well.

PRESENTATION
QoS uses the same engine as Call of Duty 4, so you might see some similarities between the two games. But seeing as how I never considered CoD 4 to be a great looking game, it would be hard to expect I think that this looks great. It's not to say it looks bad, it just doesn't stand out. There's some nice effects here and there, but overall, it's pretty average looking.

The sound fairs a little better, as it uses the cast from the movies, so no having to hear any sound alikes. (Woo!)


Overall, I enjoyed this game quite a bit. I love it's half FPS, half TPS mechanic, and the shooting is fun. It may not look the greatest, but that's never a huge issue. It is puzzling, though, that the game is called Quantum of Solace, yet it mostly follows Casino Royale.

So, while it doesn't surpass Goldeneye, I still give the game a solid 8.3/10.