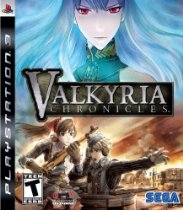 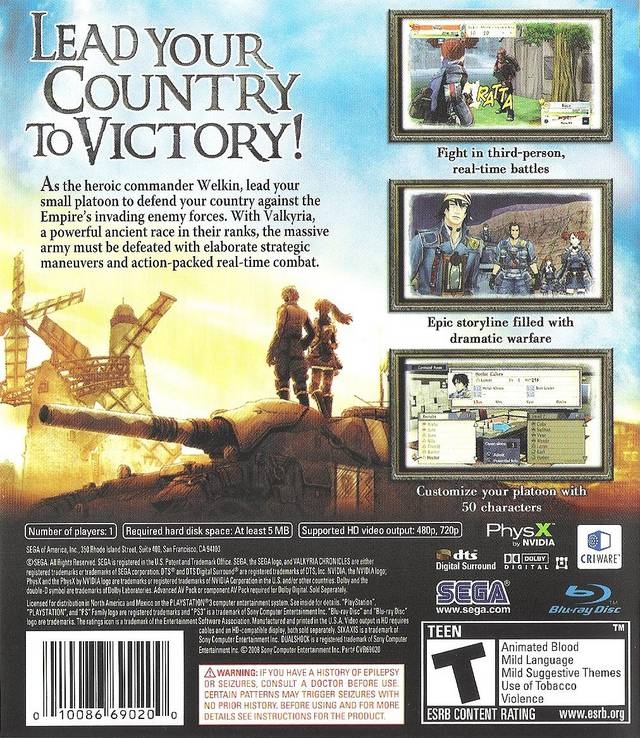 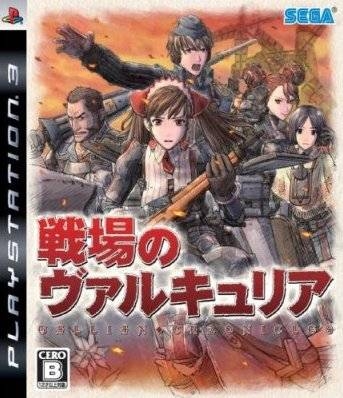 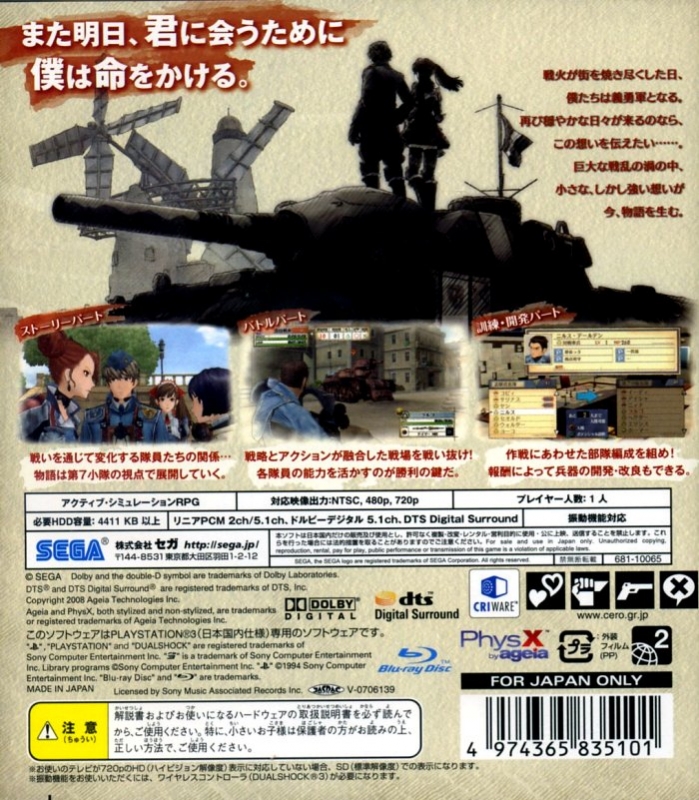 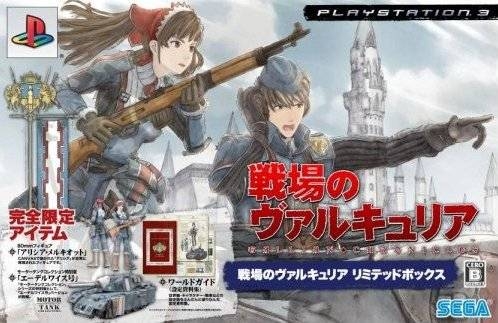 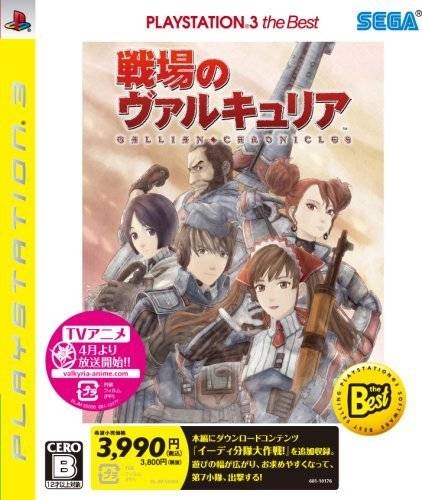 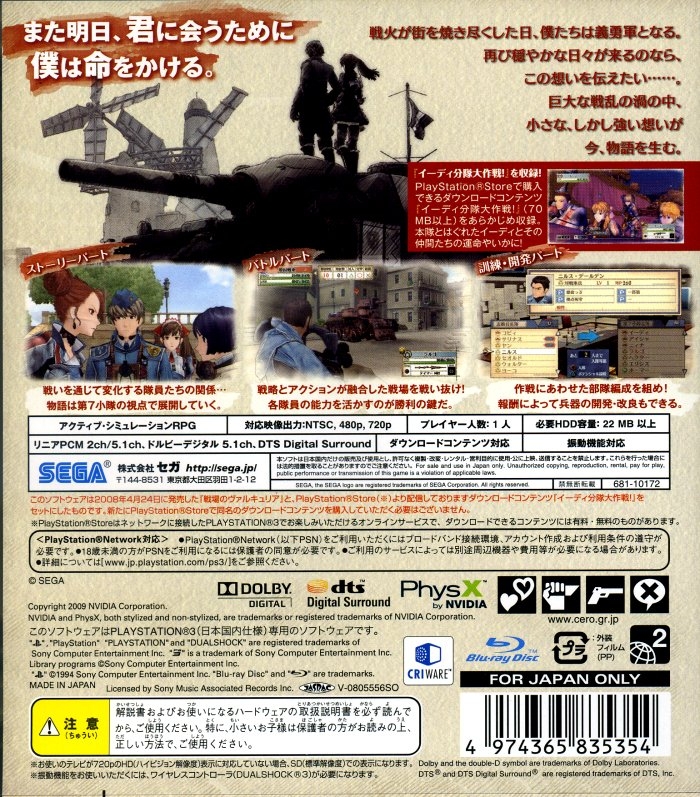 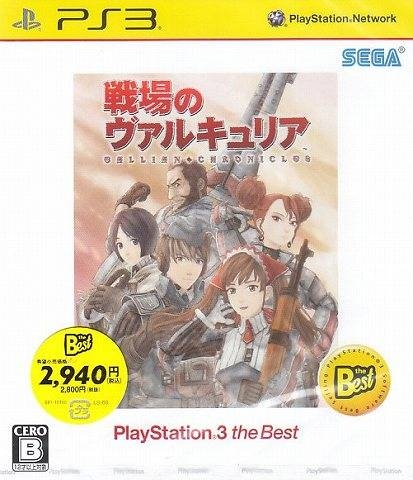 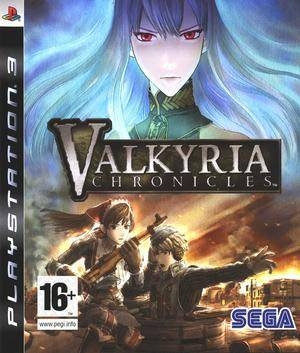 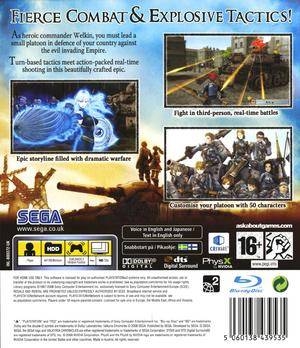 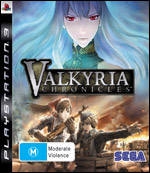 Presentation - 9.7
Gameplay - 9.5
Value - 9.5
Valkyria Chronicles Rivals team ICO titles as far as Story and Emotion goes, and with its unique and never before seen gameplay, its one of the finest if not THE finest PS3 has to offer.

Valkyria Chronicles, ...quite possibly the greatest game ever made of the current generation... "Valkyria Chronicles is a japanese tactical role-playing game published by Sega exclusively for the PlayStation 3 and was developed by Sega WOW's Overworks division.

"The game is set in Europa, a fictional version of Europe, in 1935. Because of its abundance of ragnite ore, which can be refined into a powerful fuel, the neutral nation of Gallia comes under attack from the East Europan Imperial Alliance, which is itself engaged in a war with the Atlantic Federation.

Players take control of an uprising of Gallian nationals, dedicated to repelling the invasion.

The game's visuals, which feature SEGA's CANVAS graphics engine, have received a lot of attention - with CANVAS, the game's entire graphical style is built to resemble a watercolor painting in motion."

Presentation: The Story of Valkyria Chronicles goes as thus ... "In the year 1935 EC, the continent of Europa was dominated by two super powers: The Autocratic East Europan Imperial Alliance on the east and a commonwealth of loosely allied democracies known as the Atlantic Federation on the west.

The economy of both powers depended on the precious multi-purpose mineral of Ragnite. Its growing scarcity resulted in the Empire aggressively invading the Federation's eastern border, sparking the Second Europan War. The Empire, with its military superiority quickly put the Federation on the defensive. Emboldened by their progress and momentum, the Empire decided to start a second front and invaded the neutral nation of the Principality of Gallia on its western border.

When Imperial forces launch an attack on the Gallian border town of Bruhl, Welkin Gunther, son of late General Belgen Gunther, was forced to fight for his life alongside Town Watch captain Alicia Melchiott. Along with Welkin's adopted sister Isara, the three escaped to Gallia's capital of Randgriz and subsequently joined the country's militia forces.

Welkin was given the rank of lieutenant and was assigned as the commander of the newly-formed militia Squad 7 with Alicia acting as his non-commissioned officer.

Initially members of the squad questioned Welkin's qualifications to be a commander due lack of combat experience. However, he quickly earns their trust and loyalty with his tactical genius. Together they fight in order to drive the Imperial forces out of Gallia, as well as discover the true purpose of the invasion itself."

Gameplay: The Gameplay of Valkyria Chronicles features a unique turn-based battle system called BLiTZ (Battle of Live Tactical Zones). Between turns the player is treated to an overhead map view, Command Mode, but zooms in to control each individual unit on the battlefield during Action Mode.

Movement and other actions are handled in real time during Action Mode, though limited by an AP gauge that varies for each character. Additionally, the player is in direct control of characters' aim during Target Mode, allowing for head shots and other advantages.

Taking command of individual units during the player's phase costs Command Points, which can be used to either grant movement to many different units or the same unit consecutively, depending on what the player wants to accomplish.

Each character in the game fulfills a specific role — for instance, Alicia is a mid-range rifle-toting scout, while Welkin is a tank commander. There are also a host of other roles including assault infantry, Lancers which are the anti-tank specialists, snipers, and engineers.

These various units form a rock-paper-scissors dynamic of strength and weakness. The foot soldiers (Scout, Shocktrooper, and Sniper) are effective against slower anti-tank units; anti-tank units can quickly destroy tanks with a well-aimed shot, and tanks are generally devastating against infantry, whose anti-personnel weapons are unable to inflict any significant frontal damage. By gaining experience and completing missions, the player's army will receive new recruits and their materiel can be upgraded.

The environment also factors heavily in combat. In an urban level, for example, snipers can be sent onto rooftops to eliminate unsuspecting enemies below. Tanks can knock down walls and other obstacles to open new paths. Buildings and other structures offer hard cover around which to maneuver.

Foliage offers soft cover to reduce the chance of being spotted by the enemy and to confound their aim when seen. As the Gallian forces advance across the battlefield, control points can be captured, giving the player a tactical advantage and offering additional locations in which to call reinforcements.

As Welkin, the player can issue various Orders for the purpose of things such as artillery strikes, supervising medics, and improving morale.

Value: The Value of VC is of a grand-scale, you'll clock in at about 40 hours if you rush the game, and 80 hours if you take your time to do everything it has to offer.

The DLC (available from PSN.) for $4.99 each is about 3 to 5 hours a pop, the Selvaria one in general may take even longer if you play your cards right and call checkmate.

Also if you Include Cutscenes, the value rises even higher because once you beat the level connected to the "scene" itself you may watch it in beautiful 720p HD at anytime you want.

So as far as the "Value" of the game itself goes, its above many RPG titles this generation of gaming be it exclusive to PS3 or no.

Overall: The "Overall" quality of Valkyria Chronicles in general as you all can clearly see from this review is of Epic proportions and should be enjoyed by all who own a PS3.

At this point theres little need for words, Valkyria Chronicles is such a beautiful game, only two, count them... "Two" games try to reach to VC quality this generation, and they'll be my next "two" to review, but as beautiful as the other "two" are they do not come to par of the game that is Valkyria Chronicles.