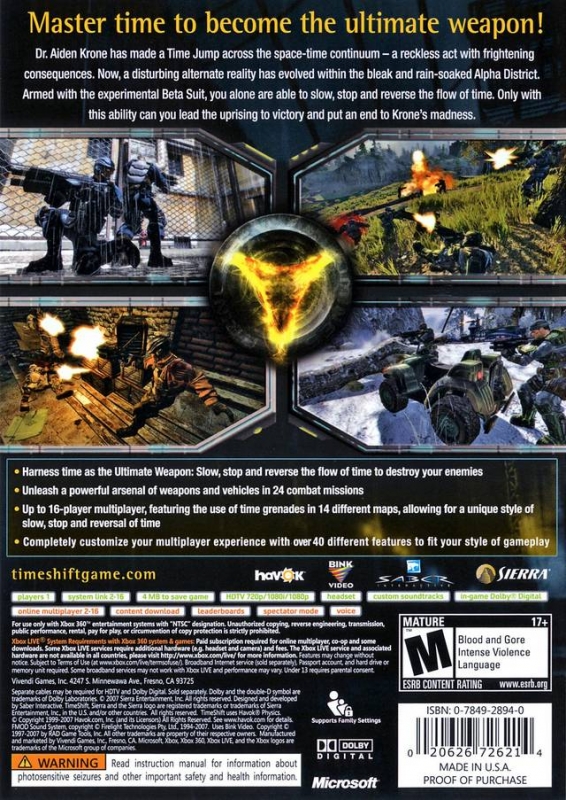 Presentation - 7.9
Gameplay - 8.2
Value - 7.3
An FPS with a cool gameplay hook, but one that has mediocre multiplayer, and feels like less care was put in the later parts of the game.

Timeshift was a game that was in devlopment for a long, long time, starting off for the original Xbox. It's out now but was all that time worth it?

STORY
Honestly, I found the story hard to follow, which made it even harder for me to care about it. Basically, you play as a physicist working on two suits that can alter time, the Alpha and Beta suits. The facility your work in gets destroyed by a rogue scientist named Krone. He has taken the Alpha Suit and warped himself back to the year 1936. You decide to take the Beta suit, which isn't as functionl as the Alpha suit, and decide to go back in time, make your way through the dystopian Alpha District and its outskirts, and destroy Krone, and preventing him from destroying the facility again.

It may sound like an alright story, but there are very few cutscenes that tell you what's happening, and even the ones that are there aren't that interesting.

DESIGN
The main mode in Timeshift is the single player. You start off by selecting one of three difficulties, though the hardest one isn't even that hard, and shoot and alter time through 24 different levels. It's a good length, taking about 8-10 hours to complete, and it's pretty fun throughout. Unfortunately, there isn't much inventive to go back and replay it, as there is nothing to really collect.

Once you're done with the single player, you'll probably want to jump into the multiplayer. There are many different modes and maps to keep you busy, though they're not quite as engaging as other shooters on the market.

Other than that, there's a few unlockables, though these are mostly just concept art. So while the game is kind of light on modes, it should keep you playing for a little while.

GAMEPLAY
As you may have guessed, Timeshift has nice gameplay hook using time. Basically, you can slow down, reverse or stop time to help with your killing. There's a meter that shows how long each can be used. Stopping time drains the meter pretty quickly, while slowing down time drains it slower. Reversing time drains it depending on the situation; if it's need to advance, it usually drains it slower. Most fo the time, you will probably slow down time instead of stopping it. A nice touch is that you can just press the left bumper, and the game will automatically choose the most appropriate time alter, though you can choose manually too.

Other than that, you got the basic shooting mecahnics seen in most games. In multiplayer, there is a slight chnage. Time alters are relegated to grenades, that explode into a bubble of time manipulation. If anyone steps into the bubble, the desired time alter will take effect on them, allowing you to shoot them more easily. As in the single player, the time stop grenade lasts a shorter time than slowing down time.

Overall, Timeshift is a tight gameplay package, and it's always fun to use your time manipulation abilities.

PRESENTATION
Timeshift is a great looking game most of the time. It easpecially stands out when using you user time alter abilities, and you see how different things react, like rain slowing down or stopping dead in its tracks. Though it seems quite apparent that more time was spent on how the first few levels look. The lighting and detail are magnificent in these levels, but the later ones all have flatter detail, and no great looking effects in them.

The sound is good too. It's especially cool listening to your gun shoot after you've stopped time, or how people talk like when you slow down time.


Overall, Timeshift is a pretty good game. The time manipulation is fun to use throughout, and there some pretty good effects that come with this, though it is disappointing that it took so long to make and it didn't end up as a spectacular game. I'd still recommend it to anybody looking for a cool twist in the FPS genre.