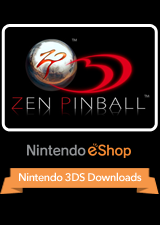 Zen Pinball for Nintendo 3DS brings an incredible stereoscopic 3D experience to the acclaimed video game pinball series for the first time ever.

• Earth Defense pits the player against hordes of hostile aliens as they try to take the planet by storm!
• Players will experience life as a novice sorcerer who must master the trade of summoning spectacular natural phenomena in Shaman.
• Travel back to the middle ages to the Kingdom of Camelot and become a Knight of the Round Table in Excalibur.
• Experience the unexplored jungles of Eldorado as you hunt for hidden treasures and uncover the mysteries of ancient civilization.