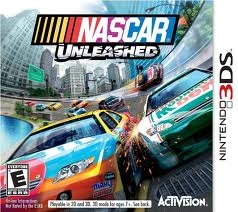 Break free from the ovals and explode onto the pavements, beaches and off-road areas of some of the most beloved NASCAR® sanctioned race tracks. See the sights, feel the salty ocean breeze and blast past the lofty skyscrapers; it’s a whole new world of NASCAR racing! Players will fight their way to be the best as NASCAR Unleashed brings the fun and excitement off the track and into your house.