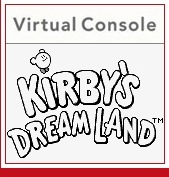 Someone has stolen from the inhabitants of Dream Land. It's Kirby to the rescue.

Kirby's debut video game has been re-released for the Nintendo 3DS system.

Dream Land is in peril. An evil king has stolen the magical Twinkle Stars. If they're not recovered, the people of Dream Land will starve.

Join Kirby, our cute and roly-poly little hero, as he runs, jumps, floats and swims in search of the treasured Twinkle Stars. He'll puff his way through castles, caves, dungeons and forests. There are many wicked and greedy enemies in his path, but Kirby has a special way to defeat them. It's nonstop action all the way to the top of Mt. Dedede.