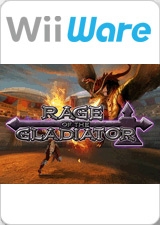 Rage of the Gladiator (WW)

In Rage of the Gladiator, you are fighting for your life in an arena. Armed with your magical warhammer and a trusty shield, you must defeat fantastic bosses including a Chimera, Beholder, and a Dragon.

The game is a series of epic boss-battles. There are no ‘fodder’ enemies – its all bosses — the most fun part of games!

Each boss has unique abilities and powers. Exploit the weakness of each enemy by jumping, dodging, or shield blocking with the proper timing and agility. Then unleash your rage and decimate your enemy with your warhammer, and you will triumph!

Leap to the skies then plunge your warhammer into the ground, creating a pillar of fire that burns your enemy to a crisp.
Transform into a hulking colossus 10 times the size of your opponent, pounding him into the ground.
Darken the skies with a solar eclipse, sending a beam of light to fry your enemy.

• Customize your character. As you defeat bosses, you earn skill points. You can apply those skill points to one of three skill trees: Offense, Defense, and Magic. This gives you new powers. It also provides great replay value since you can replay through the game with different skill tree decisions.

• Fantastic 3D-graphics. Fully rendered and realistic, you do combat in a fully lit 3D arena. This polish level is rare for a downloadable title.

• Extremely realistic animations. When you attack bosses, the impacts and hits feel “real.” Each boss has been painstakingly animated to react properly to each of your attacks.

• Outstanding replay value. Once you’ve beaten the first 10 bosses, you must face them again in Challenge Mode, which is a completely new experience – the bosses are more difficult with new powers. There are 21 total battles.

• Epic soundtrack. The music has been designed to be exciting and memorable, and really gets your blood pumping.

Experience the Rage of the Gladiator!