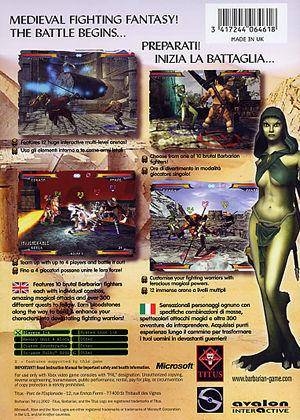 With its perfect blend of exhilarating fighting and deep RPG storytelling, Barbarian will take you further than any fighting game has ever taken you before! Heroes of Barbaria have waged war since the dawn of time, ravaging the Earth as they battle with weapons and magic alike. Their motives to stop the madness forged by the evil Zaugg are more than ending his growing power. Who they are, why they quest, and what they will become is destiny. Only one has the power to succeed! One to four players can compete simultaneously with up to eight different fighters on the screen at the same time. Follow your character's journey in Quest mode, upgrade it, save it on your memory card, and then challenge your friends in Combat mode with your very own personalized character!