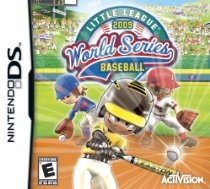 Little League World Series Baseball 2009 is the second officially licensed Little League video game for next-generation consoles, and once again it is being developed by world renowned Japanese studio NOW Production. Players will have the chance to become a Little League World Series baseball Champion, or play with up to three other friends in a variety of exhibition modes. New features include a full team editor, regional tournaments, all new stadiums, new skills challenges, an expanded set of collectible content and much more. Both versions improve upon the popular motion and stylus controls, respectively, for batting and pitching.