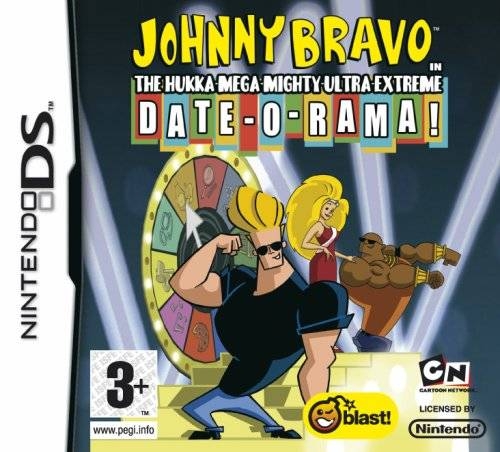 Play the part of Johnny Bravo in this inherently humorous game and compete against rival studs over a number of events to win a date with the chick on the Hukka-Mega-Mighty-Ultra-Extreme Date-O-Rama TV show! The game has the same look and feel as the TV series and the simple yet fun design makes it instantly accessible to casual and non-hardcore gamers. Use the NDS stylus to try and beat your opponent in the Muscle Madness weight lifting event and have fun throwing rubbish in the recycling bins or straight at your opponents in Taking Out the Trash. Use the Cheese-O-Vac suction gun to vacuum up the plague of mice, then blow into the NDS microphone to clear the collected rodents ready for the next Cheese-O-Vac vendetta! Control the food catapult using NDS Touch Screen Technology - try to impress the chick by firing all the food at your rival! The Creator of Johnny Bravo, Van Partible, has had a huge amount of input into the creation of the game and has designed the cover artwork and drew specific art characters for the game as well as hidden unlockable concepts (five items).