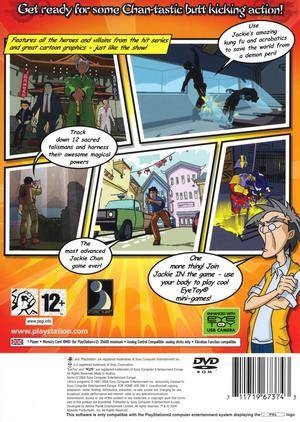 Released to tie-in with the animated series currently receiving an airing on various kiddie-friendly channels, Jackie Chan Adventures is a cel-shaded platformer with plenty of puzzles, missions and kung fu action to keep younger fans happy.

Become nimble secret agent Jackie and take on the mighty demon Shendu in a race to retrieve 12 ancient talismans imbued with magical powers.

Partnered with his young apprentice and niece, Jade, the hyperactive high-kicker embarks on a globe-trotting adventure in search of the artefacts, all the while trying to fend off Shendu's evil ninja henchmen. Explore, climb and fight using Jackie's well-known athletic and acrobatic abilities as your adventures take you across the world.

Compatible with your EyeToy, Jackie Chan also features a clutch of fun minigames designed to get the whole family off the settee and playing.