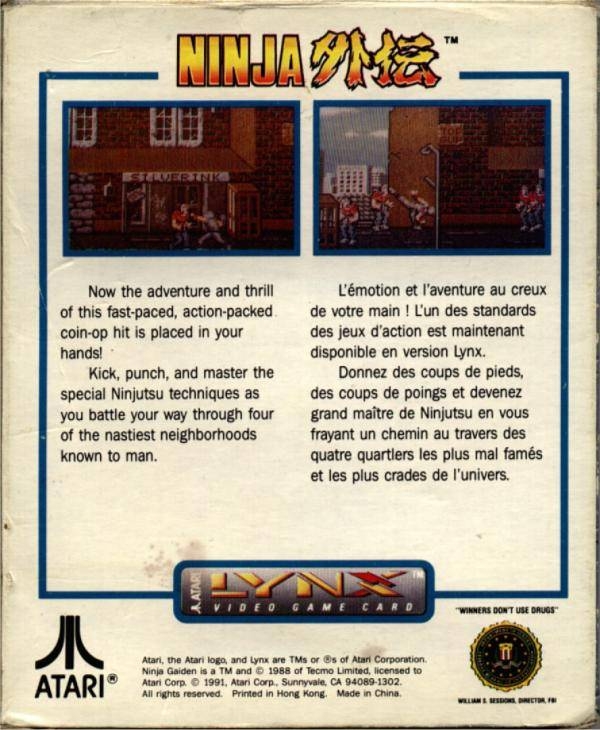 Now the adventure and thrill of this fast-paced, action-packed coin-op hit is placed in your hands!

Kick, punch, and master the special Ninjutsu techniques as you battle your way through four of the nastiest neighborhoods known to man

Your training is nearly complete, NINJA. To earn the title of NINJA
GAIDEN you must compete a daring quest.

Many have gone before you, some more experienced, some less.

The powers of darkness have turned the sacred silent city into the
evil, noxious lair. They profane the holy walls with graffiti
and billboards. They fill the streets with smoke and filth.

We have sent many experienced NINJAs to free the city none have returned.
We have heard that some have been destroyed. Others have been too
weak to overcome the lure of evil and gone over to the other side.

Under cover of storm, the young NINJA approaches the silent city.

To begin the game, insert the NINJA GAIDEN game card and press the
on button. Press A or B to advance through the title screens.
Press B to fight the powers of darkness. Change direction by pressing
the joypad right or left. During the battle, the young NINJA discovers
that he must often use his agile strength to jump. Press a to jump
straight up. Press option 1 while the young NINJA is in the air to
grab a pipe or bar. While the NINJA hangs from a bar or other object,
press the joypad to swing and the B button to kick an enemy.

As an enemy approaches, the NINJA runs towards him and jumps. As
he flips over the enemy's head, the NINJA grabs the evil one's
shoulders and throws him. The pause button stops the game until
you press pause again. Option 1 and pause together restarts the
game option 2 and pause flips the screen.

The NINJA begins his quest. He runs through the city, fighting the
powers of darkness. His rappid-fire kicks and punches and well timed
flips and jumps make the NINJA a tough foe for the swarming enemies.

After clearing the city of evil guardians, The NINJA still has one
enemy to face: the mighty dark lord. The dark lord is very large
and he's armed with razor-sharp sabres. He is highly trained in
all the violent arts-in fact, he invented most of them himself.

Time is short for our NINJA hero. He starts with only 99 seconds
to complete each of the levels. If he does not complete a level
within the alloted time, he will lose a life.

The young NINJA sends a masked NINJA enemy flying. The masked NINJA
crashes into a telephone booth and smashes it to pieces, revealing
a valuable treasure within.

There are six different treasures and power ups:

Is takes more than a simple K.O. to beat our hero! As long as he has at
least one K.O. left on the K.O. indicator, he gets up relatively unscathed.

You can continue the game from where the NINJA hero lost his last
life. When the continue screen apears, press A or B before time
runs out. The NINJA lives again, but the point total returns to zero.

When you complete the fourth level, the game ends. if the NINJA completed
all four levels without losing his last life, he earns the title
of NINJA GAIDEN.