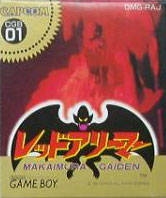 Firebrand is a gargoyle who is predestined to be the Red Blaze who saves the Ghoul Realm from the evil wrath of King Breager and brings peace to the land once again.

“ A long time ago, the Ghoul Realm barely escaped great peril. A large army of Destroyers came from a neighboring universe. The creatures of the Ghoul Realm were no match for the powerful Destroyers. Just when everyone had given up hope, a great fire swept over the Realm, wiping out the Destroyers' army. Several hundred years have passed and the Realm is threatened once again... ”

* Firebrand (main character) - a gargoyle predestined to become the Red Blaze and take down King Breager.

* Red Blaze - savior of the Ghoul Realm. Was a mutant gargoyle. Defeated the King of Destruction years before and locked him underground. Rushifell believes he is actually the Red Blaze until Firebrand defeats him and rightfully earns the title.

* King Darkoan - a king of the Ghoul Realm. Usurped by King Breager and thought to be killed by the Destroyers, he is actually imprisoned in his own tower, unable to move from his throne.

* Barone Jark - baron of the first city you come to; looks like Satan from Ghosts 'n Goblins. Asks you to obtain his Gremlin Stick, which was given to him by King Darkoan, using the Fingernail of the Spectre. Can predict the future when in possession of the Gremlin Stick.

* Majorita - lives in the Cave of Darkness and tells Firebrand the legend of the Red Blaze.

* Barone Bymon - has the Candle of Darkness, which is needed to find Majorita in the Cave of Darkness.

* King Breager (final boss) - known as the King of Destruction. Wants to destroy the Ghoul Realm. Has failed to do so on a previous occasion when he was stopped by the Red Blaze.

* The Destroyers - the army controlled by King Breager.

* Zundo Druer (first boss) - fought in the burning town. Guards the portal to the Ghoul Realm. Looks like a giant blowfish and spews forth living flames that float downward.

* Four-Eyes (second boss) - this collective creature is the boss at the top of the Tower and is guarding the Gremlin Stick. The four eyes are placed on the walls: two on one side of the room, two on the opposite. They shoot sparks from their irises.

* Bellzemos (third boss) - the demon that is holding King Darkoan prisoner in Darkoan's palace. A skeletal demon that flies and can break his body down into bee-like creatures before reconstructing somewhere else.

* Zakku Druzer (fourth boss) - appears in the Desert of Destitution. Resembles a giant skeletal snail with two smaller demon heads below his main head; these shoot projectiles at Firebrand. Is holding the Candle of Darkness.

* Rushifell (fifth boss) - believes himself to be the Red Blaze and holds the Eternal Candle. Once he is defeated, he gladly hands over the candle to the true Red Blaze. His name appears to be a deliberate mistransliteration of Lucifer and is the same character as Lucifer from Ghouls 'n Ghosts (who was renamed Loki in the Genesis version).

The game consists of two types of areas: an overhead view where Firebrand traverses the Ghoul Realm, either on the world map or in towns, and individual, side-scrolling, battle levels which feature a boss at the end. In between actual levels, as Firebrand traverses the overhead map of the Ghoul Realm, he is susceptible to random encounters like a typical console RPG. He must defeat the enemies in order to return to the overhead-view map. There are also ghouls that can be encountered that spark a small battle level which the player must defeat in order to get past them.