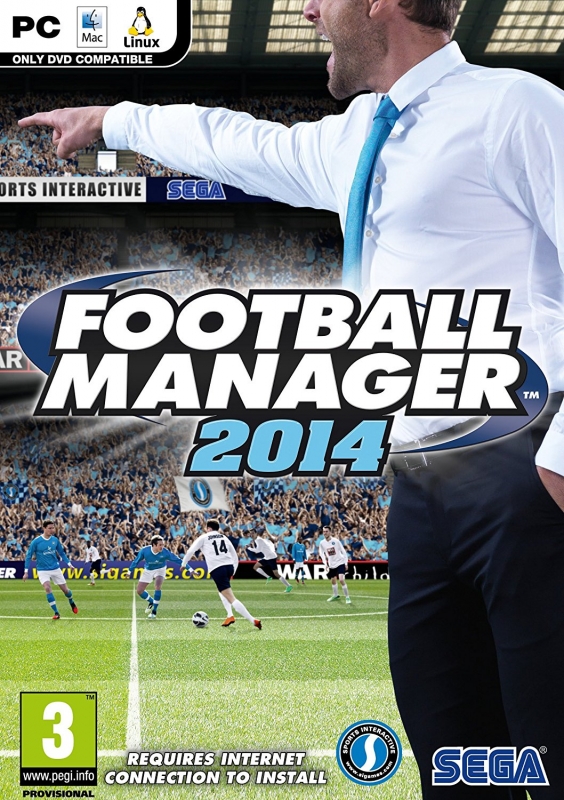 More than 1,000 improvements and enhancements make Sports Interactive and SEGA’s tenth Football Manager the most compelling and realistic to date!

Football Manager 2014 is the most feature-packed and technically advanced release in the series’ history. Benefitting from more than 1,000 improvements and enhancements over its most recent predecessor, FM 2014 is the most realistic simulation of football management ever released.

In addition to enhanced gameplay, FM 2014 also delivers a range of technical innovations, with the game available on Linux for the first time and the introduction of ‘cloud save’ technology, which means that managers can now pursue a single career from any computer, anywhere in the world.

The FM experience is also more customisable than ever before, as the integration of Steam Workshop tools make it easy for managers to create and share customised FM content and experiences such as photo/logo packs, new and custom competitions and even tailor-made in-game challenges using the new Challenge Editor which has been incorporated into the free-to-download Pre-game Editor.

Play  on Linux for the first time, plus the inclusion of ‘cloud-save’  technology which means that managers can now pursue a single career from  any computer, anywhere in the world. FM14 also includes integration  with Steam Workshop making it easy for managers to create and share  customised FM content such as photo/logo packs, new and custom  competitions and tailor-made challenges using the new Challenge Editor.

The 3D Match Engine has seen extensive improvements, including enhanced AI, improved lighting and player animation, individual player character and kit models, more realistic player reaction to on-field incidents and a range of optimisations which combine to make this the best looking and fastest FM Match Engine yet.

There has been a complete redesign of how tactics are created, selected and implemented with player roles and team strategies becoming even more prominent, definable roles for players for multiple positions, new player roles and instructions and improvements to rival managers' AI so that they’ll adapt their tactics more readily over time.

FM 2014 features a revamped transfer module where opposing clubs and managers adopt a more realistic approach when making or responding to transfer offers. In addition, a number of new ‘real world’ transfer clauses have been added, such as the facility to loan a player back to the club he’s just been bought from and the option to offer a combination of cash and loan players, as well as new contract clauses such as a sub bench appearance fee. On top of this, the old ‘turn-based’ system of transfer negotiations can now be done two ways, the tried and tested system and a new ‘live’ system, similar to that used in FM’s contract negotiations.

Contract negotiations are more realistic in FM 2014, as managers and boards can now make demands and lay down their respective visions for the club in both initial job interviews and contract renewal discussions. Managers can also attempt to renegotiate transfer and wage budgets as a reward for staying loyal if they’ve been offered a job by another club, with the outcome helping aid their decision on whether to move or not.

There is now better interaction between players, managers, their rivals and the media; for example, members of the coaching staff now offer feedback on how reserve and youth team players are performing. Managers can also ask key players to have a word with unhappy squad members, while the introduction of an end-of-season meeting allows the manager to let the squad know how they have performed and set targets for the coming season.

The news system has been overhauled so managers can now deal with many club matters directly from their inbox. In addition, news is now colour-coded, based on category, and contains more detail – for example, scout reports now appear as a single news item with a top-line report on all players scouted and the facility to shortlist or make an offer for each of these players.