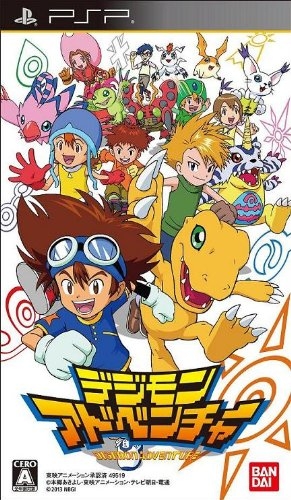 A solid JRPG that is better with the power of nostalgia.

Presentation - 9.0
Gameplay - 7.0
Value - 7.0
Digimon Adventure is a remake of the classic series to the PSP in a JRPG format. The game has good graphics, songs and voice over from the TV show, but it depends a lot on player nostalgia.

Recently, after years without consuming anything from Digimon, since my teenager days and realizing how many good games the franchise have, I thought about playing my first Digimon game since PS1. When I was choosing what I play, I found Digimon Adventure, a remake of the classic anime, all sagas, with voice over from the series, the same songs and with a fan translation to English. With the power of nostalgia in my heart, I did not think twice and played the game on my PSP.

Firstly, I was surprised with the original intro of the anime, playing the classic song Butterfly was amazing. More than that, the game has astonishing graphics for the PSP, with great Japanese voice over (many lines are re-use assets from the Tv show).

Secondly, the game is a remake, so the is divided in TV episodes, each episode on chapter. They are really straightforward and quickly to play, what is perfect for a handhelded. If the episode is too big, they break it in two. One for the main story and the other with the filler part as a side story episode that is optional to play. The episodes go from the beginning of the series when the kids arrive in the Digiworld and covers the four arcs of the show. What is amazing, if you as me, watched the series when was kid and not remember of everything. It is a wonderful way to be surprised again with that feeling, "Oh my god I loved this Digimon, and totally forgot about it". (Sorry, Andromon).

Beyond that, the game gives to you the possibility to farm and fight again some bosses in kind of Tartarus from Persona 3. It is a blend black word that you can explore, but is totally optional and not necessary.

The gameplay is really solid, It is a classic turn-based JRPG. After you Digimon evolve in the story, you can Digivolve him in all battles, consuming a little of SP. Each Digimon have the classics moves from the anime for each form. You can upgrade some blend moves and the status of your Digimon in the menu. They have a system like the materia of Final Fantasy 7. Each Digimon has a quantity and a format that you can plug the "materia", to customize your Digimons. It is up to you to define what character will be focused on healing or be a tanking, for example.

However, in the gameplay is the weakest part of the game. Even that is really solid and fun gameplay, with the time it becomes something boring. The battles are not challenging, even the bosses only have a large amount of HP. You will never need to strategize or think too much about how to defeat a boss. Even the worst bosses of the games have only a large amount of HP and a give you big hit over and over again.

Finally, it is sad that the game is exclusive of PSP and was only released in Japan until today. The first season of Digimon was a hit on in the western. The fan translation is amazing, and give to us the opportunity to play the mage. It's a beautiful and solid game, but how much you will play, definitely depends on your nostalgia with the original series.

PS: It's my first review in English, sorry if I made a lot of grammatical errors, feel free to give feedback if you want.