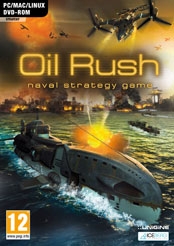 Oil Rush is a real-time naval strategy game based on group control. It combines the strategic challenge of a classical RTS with the sheer fun of Tower Defense.

Fight the naval war between furious armies across the boundless waters of the post-apocalyptic world. Pump the ever-so-precious black gold by oil rigs, capture platforms and destroy the enemy in the sea and in the air.

Be ingenious to unlock super technologies and quick to send your squads straight into the heat of the battle!

In a post-apocalyptic flooded world there are two things running short: oil and time. The last survivors in a desperate desire to seize control and dominate the enemy have started the naval warfare that turned the whole world into one large battlefield. In these harsh and cruel times, oil is thicker than blood.

Oil Rush is a real-time strategy game based on group control. It offers mechanics of a classical RTS combined with a Tower Defence genre: control the upgrade of production platforms as well as their defence forces, and send battle groups of naval and air units to capture enemy platforms and oil rigs.