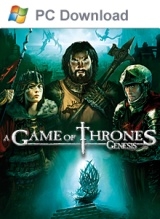 A Game of Thrones: Genesis (PC)

"A Game of Thrones - Genesis" is the video game adaptation of George R.R. Martin's best-seller series of novels A Song of Ice and Fire. In this strategy game developed by Cyanide Studio, your political prowess will be as important as your strategic and military skills!

Thanks to a well-developed single player campaign written under supervision of the author, "A Game of Thrones - Genesis" immerses you into the heart of the battles and intrigues between the Houses that shaped the Kingdom of Westeros.

From Nymeria's arrival in the Kingdom of Dorne to the awakening of the "Others" beyond the Wall, you'll live the origins of the A Song of Ice and Fire saga through more than 1000 years of history. From year -750 to year 299, you will take part in Westeros' founding events and largest battles, such as Aegon the Conqueror's invasion of the continent or the War of the Usurper.

"A Game of Thrones - Genesis" is also a great multiplayer game. Up to 8 players confront each others to claim the Iron Throne in intense games where alliances, betrayals, cheap shots, and pitched battles take place!