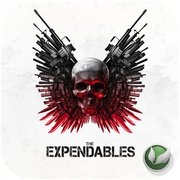 The official game to the action film of the year!

What critics say:
“Expendables has an addictive and challenging gameplay combined with decent graphics backed by excellent background music.”
- iPhoneAppsReviewOnline.com

“It got intense for me which I LOVE in a game. I played it for a while which brings me to the next strength. Addictive game play!”
- IUseThisApp.com

Free the island of Vilena from general Garza’s dictatorship!

Take control of elite mercenary Barney Ross (Sylvester Stallone) and fight against the troops of the Dictator! In a gaming environment based on the setting and the atmosphere of the film, you are trying to get rid of as many of Garza’s men as possible. Survive one wave of enemies after another and climb your way to the top of the OpenFeint highscore charts!

Note: If you have any Problems installing the game, feel free to write us an email. Please provide information about your OS and your device and we will try to fix your problem as soon as possible!