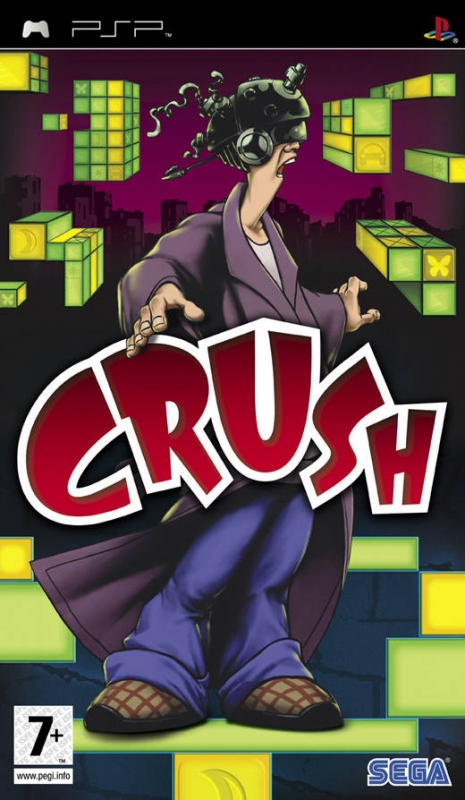 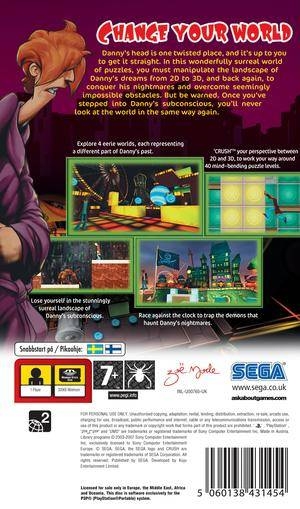 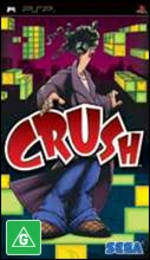 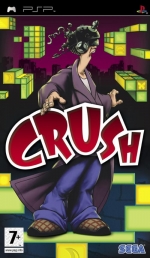 Our review of one of the PSP's more unique puzzle games.

Crush is a puzzle-platformer available for the PSP, no shortage of them you might think, but unlike a lot of other puzzle games on the market Crush actually has an involving storyline that ties everything together. You control Danny, an insomniac with a lot on his mind. His insomnia has become such a problem that he resorts to the experimental treatments of Dr. Ruebens. The good doctor has invented a machine called C.R.U.S.H (hence the title), which allows Danny to explore his own mind and, theoretically, wrestle with his inner demons in order to cure his insomnia.

One of the key attractions of the game is the refreshing storyline. Other than the off-hand remarks and short exchanges of dialogue during the tutorials, the story is primarily told through comic book cut scenes. These images are well drawn and detailed, the dialogue is generally interesting and contains suitably dark humour, and the voice acting is spot on. The only downside, and it is quite an important one, is that there just aren’t enough of these cut scenes. You’re only treated to one after you’ve completed a few levels and even then they’re almost always really short affairs that barely manage to skim the surface of Danny’s inner-psyche. Not only does this mean that the storyline is often cut unfortunately short but it also drastically reduces the effectiveness of the story as a reward for completing the often difficult and sometimes tedious levels. In total there are 40 levels, spread out over four different environments (the city, seaside, funfair and nursery). Each environment represents a memory from Danny’s past which still haunts his unconscious mind. Your task is to collect enough marbles in each level to trigger the exit and then escort Danny safely to that exit. The controls are simple and easy to grasp – the analog stick moves Danny, the D-pad moves the camera and the X button makes Danny jump. However, each level is a surreal mixture of fractured blocks and obstacles which make getting to the exit impossible using just the standard platforming staples of running and jumping. Enter the puzzle element - crushing.

If you press L, Danny will stomp on the floor and ‘crush’ the level. This essentially means that the entire level is flattened (in line with the camera angle you’ve chosen) into a 2D plain. Pressing L once more will cause the world to uncrush and go back to 3D. By utilising different camera angles and the different dimensional plains you are able to navigate Danny through each level towards the exit. To illustrate, take the screenshot below. Those platforms in the far distance cannot be reached on the 3D plain the game is currently set in, but by crushing the world to a 2D plain those platforms in the distance will merge with the ones in the foreground to form a single 2D gaming space. Then, by platforming, Danny should be able to stand on one of those platforms. You can then uncrush the world and voila, Danny is now on the other side of the level. It sounds quite complicated, and I assure you it does get complicated, but the tutorials do an excellent job of explaining the core mechanic and it will soon become second nature to test out different camera angles and dimensions in order to access otherwise blocked off parts of levels. Over the course of the game the structures you have to negotiate become much more complex and labyrinthine, and new obstacles and puzzling challenges are gradually introduced. The difficulty curve is initially superb, with each new level becoming gradually more difficult than the last. Furthermore, as you go from one theme to the next, the new puzzle elements that the game introduces are well explained in a series of short tutorial levels. Just in case you’re struggling with a particular puzzle the game includes one hint for each level. The hint is triggered when you reach a key part of the level and will consist of a cryptic sentence accompanied by a brief clip showing you the area of the level you should focus your attentions on.

However, at around the half way mark the difficulty suddenly sky-rockets, the game becomes much more uncompromising and even the staged hints become puzzles in themselves. If you find the hint of little use then you’ll probably end up just crushing all over the place until you land on a new part of the level. Fortunately you will always have access to a number of levels, so if you’re finding one level particularly impossible then you can always skip ahead. Be warned though, if you start skipping levels then you will also start to miss out on some of the cut scenes, so the plot will in turn become pretty nonsensical. With the exception of the excellent comic book style cut scenes, Crush never excels graphically. The levels are a simple combination of blocks and platforms set against a themed background, and sometimes look rushed. In 3D the blocks often have rough, jagged edges, which would ordinarily be fine for a complex-looking PSP game, but what’s on show is neither full of detail nor vibrant with colour or activity. The art style is certainly suited to the dark and eerie feel of the story, but it doesn’t compensate for otherwise simple visuals and bland textures. In fact it often has the opposite effect, because the often dull and lifeless art style can become quite overbearing and tiresome. This effect seems exacerbated by the music. I’ve already mentioned the praise-worthy dialogue and voice acting, unfortunately by contrast I found the music to be drab and far too imposing, something which curiously mirrors the art style, but not in a positive way.

The camera on the other hand is a definite positive for the game. It’s intuitive and on the whole able to provide a useful view of the level from whichever angle you select. If you attempt to select an angle which would offer up poor footage then the camera will simply skip the shot until you manoeuvre Danny so that he’s in a position where the view will actually be useful. It’s not perfect; in the large levels that dominate the final stages of the game the map will be full of complex patterns and structures which can sometimes result in awkward camera footage, but it’s generally unobtrusive and works well. It’s hard to put a time frame on how long it takes to complete Crush because some people will find one level particularly difficult and can end up stuck on it for an hour or so, whilst others will find it relatively straightforward and will complete it within a few minutes. Hypothetically each level has the potential to be completed within five to fifteen minutes, assuming you know exactly what you have to do, and it should take an average gamer a good ten hours or so to complete the whole game. After completion there’s no real replay value. If you want to you can go back at any point and complete previous levels and collect all of the items scattered around the map. This allows you to unlock concept art, trophy challenges and time trials, but I never felt inclined to go out of my way to do so.

Crush is a clever puzzle game with a sound gameplay concept. Unfortunately that single concept alone is not enough to sustain the game for its entire run through; it lacks the fun factor and runs out of steam at the halfway point, from then on the game becomes quite a slog to get through, a problem which is only ever compounded by the overbearing music and dull art style. Ironically for a puzzle game the story is its strong point, presented as it is in beautifully crisp and detailed comic book cut scenes coupled with some great voice acting and dialogue, but these scenes are few and far between and are so short that they fail to provide a sufficient incentive to keep playing. Crush is probably worth a rent, if only to experience the concept first hand, but if you’re looking for an enjoyable puzzle game with lasting appeal on your PSP then this is unlikely to be that game.