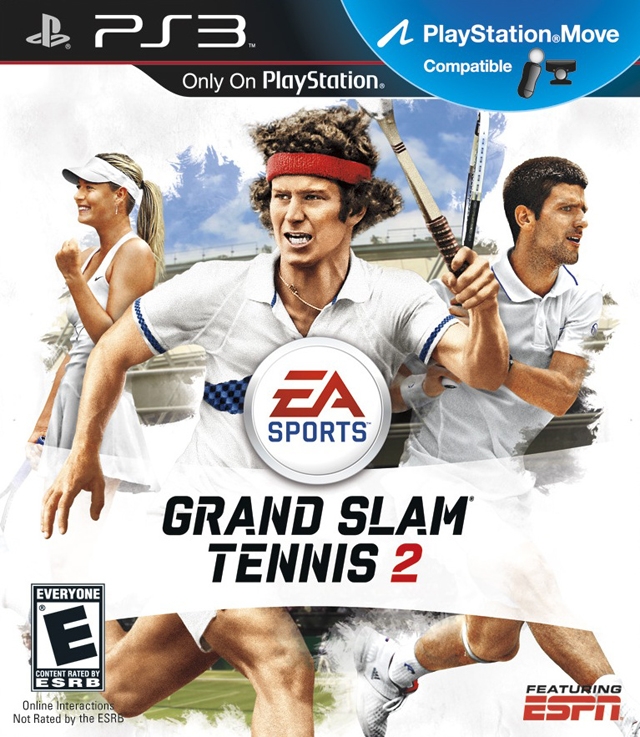 Feel the true excitement and emotion of championship tennis with Grand Slam Tennis 2.For the first time in HD and on the next generation platforms, experience the thrill of winning at Wimbledon and capturing all four Grand Slam tournaments. Rise to stardom with the revolutionary Total Racquet Control as you challenge a deep roster of elite players, including Djokovic, Federer, Nadal, Sharapova, Borg, and McEnroe. With immersive PlayStation Move support, authentic gameplay, ESPN broadcast integration, a deep 10-year career mode and so much more, get ready to Swing the racquet like a Grand Slam champion with Grand Slam Tennis 2.

- All-New Total Racquet Control:  Control every shot with the right analog stick, smashing forehands, backhands, overheads, and volleys with precision, accuracy, and power. Utilize this innovative control system to take your game to the top!

- PlayStation Move Support:  An immersive motion control experience puts a racquet right in the palm of your hands. From casual players to tennis superstars, PlayStation Move gives you the chance to swing your way to victory.

- Win all four Grand Slam tournaments: Become a true Grand Slam champion by capturing all four major championships, for the first time ever in Next Gen gaming. The prestige of some of the most historic events in tennis jumps to life like never before, including the Australian Open, French Open, U.S. Open, and exclusive to EA SPORTS, Wimbledon.

- Legends of Now and Then: Play with or against more than 20 of the greatest players to ever grace the courts, including Djokovic, Federer, Nadal, Djokovic, Borg, Sharapova, the Williams sisters, and exclusive to Grand Slam Tennis 2, seventeen time Grand Slam winner John McEnroe.

- P.R.O. AI: The playing styles and behaviors of the sport’s greatest stars are captured right down to their signature swings. Realistic tactics and strategies are your keys to success against each legend on a variety of court surfaces including clay and grass. The organic AI adapts to your game so there’s never a dull moment in Grand Slam Tennis 2.

- ESPN Grand Slam Classics:  Relive the most memorable moments in tennis. From Borg vs. McEnroe to Nadal vs. Federer, play your way through history while unlocking up to 25 amazing Grand Slam moments.