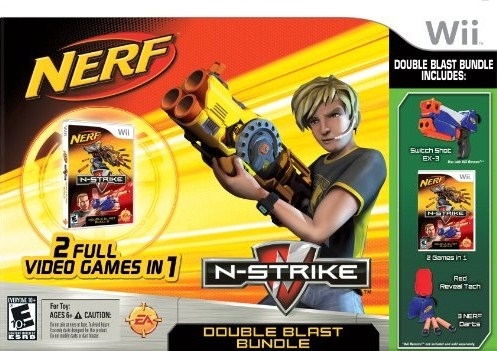 The N-Strike Double Blast Bundle is a compilation of EA's top-selling NERF-branded shooter games for the Wii, along with a NERF blaster and decoder lens to play the game with. The high-action bundle includes two complete video games -- NERF N-Strike and NERF N-Strike Elite -- plus the custom Switch Shot EX-3 blaster and attachable Red Reveal decoder lens, allowing players to embark on a variety of missions while putting their NERF mettle to the test. NERF N-Strike allows players to advance through progressively more difficult missions while honing their blasting skills and strategy. Using multiplayer capability to play in teams of up to four, players explore a top-secret NERF building while solving the mystery of an unknown threat. Players can unlock more than 25 in-game blasters, some of which are exact replicas from the real world NERF product line like the LONGSHOT CS-6 and VULCAN EFB-25 and fantasy blasters such as the Crusher and Semper Fire, created exclusively for the video game. In NERF N-Strike Elite, players are given the choice of four characters, each with distinctive in-game blasters and unique skills. Players can go solo or team up with a friend in two-player co-op mode to take on increasingly difficult missions with the end goal of defeating an army of robots. The game includes more than a dozen unlockable in-game blasters - including Hasbro's popular NERF N-Strike Raider Rapid Fire CS 35 -- each with its own individual strengths.