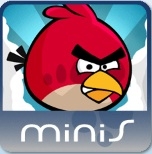 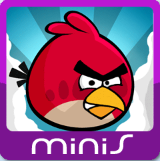 The survival of the Angry Birds is at stake! Dish out revenge on the greedy pigs that stole the Angry Birds' eggs. Use the unique destructive powers of each Angry Bird to lay waste to them pesky-pigs' fortified castles. Angry Birds is a challenging physics-based castle demolition with infinite replay value. Each of the unique levels requires logic, skill, and brute force to crush the Piggies.

SMOOTH, POLISHED GAMEPLAY
Fire your squawking birds into the enemy fortifications. Change your tactics as new birds are added to your arsenal and smash the Piggies defences.

HUGE GAME WORLD
Angry Birds has a whooping number of levels spread out over many different worlds, each one carefully designed to reward the use of clever strategies and lateral thinking.

ADDICTIVE EXTRAS
Even once you've completed the game, there's still more to explore: max out your star-ratings through precision shooting. Hunt throughout the game for the secret Golden Eggs to unlock bonus levels and hidden features.