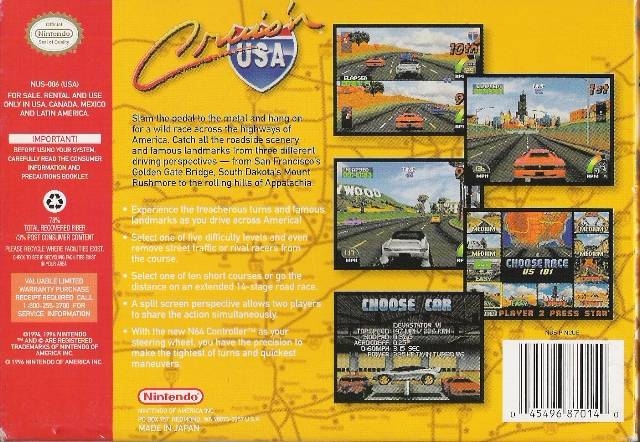 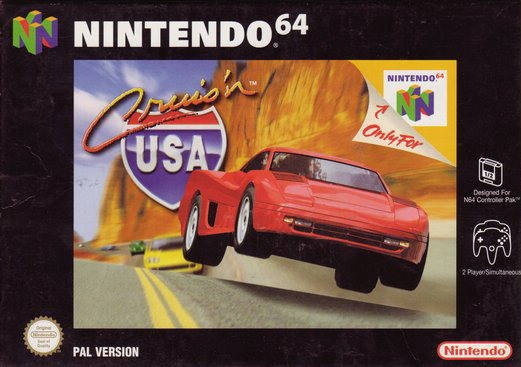 Cruis'n USA, along with Killer Instinct, was to be one of the original games slated for release on the "Ultra 64" (the working title for the Nintendo 64). Nintendo also promised arcade-perfect translations of these titles. They delivered on neither count. Now, after years of wading through rumors and delays, the Nintendo 64 has made it to the store shelves, and so has Cruis'n USA. And while Nintendo's game machine lives up to its billing, Cruis'n USA doesn't even come close.

The dazzling qualities of Mario 64 and other banner-title N64 games make Cruis'n USA pale by comparison. Cruis'n USA's frame rate isn't up to speed, meaning that the movement is a touch jerky. Even so, the graphics are crisp and colorful, but the horizon is too close. The result is some pretty bad "pop-up," where scenery simply fades away into the distance with little to no warning. The same tunes from the arcade version are present, but they come up short after being brutalized by the N64's weak music capabilities. The arcade's speech and sound effects are also present, though they're muffled.

The Nintendo 64's analog stick controller really comes into play during Cruis'n. After getting used to the feel of the stick, players should be able to take turns as though they were using the arcade version's steering wheel. Weaving in and out of oncoming traffic is no problem. Another nice feature is the addition of faster cars, each of which is earned by completing the entire 14-leg cross-country race. The game also includes hidden cars, most notably a school bus. But as much fun as driving a gray school bus may sound, it isn't a compelling reason to finish each difficulty level with each vehicle.

Ultimately, Cruis'n USA is a dead conversion of a dead arcade game. Perhaps if Nintendo had waited to release a home version of the planned sequel, Cruis'n World (like they did with KI Gold, an enhanced version of Killer Instinct 2), this effort may have been worthwhile

Ever felt like driving to the Golden Gate Bridge, Mount Rushmore and the White House in one day? Well then, gear up to put your racing skills to the test in a frantic trip across the United States, following a route that you won't find on any map. Whether it's the rolling hills of Appalachia, the flowing cornfields of Iowa or the crowded tunnels below Chicago, you'll find yourself too focused on the intense racing action to worry about the scenery.

Get started by picking from a garage full of cars to find the one that best suits your style—if you're good enough, you'll even find a few hidden ones to round out your selection. Then choose one of three different playing perspectives and get ready to hang on tight. With five difficulty levels, the ability to remove traffic or other racers, and two- player simultaneous racing, it's enough to make you forget all about finding that next rest stop. Just watch out for the cows, OK?