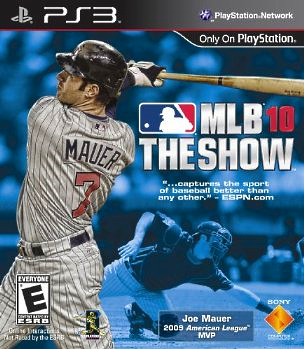 Widely considered the most authentic baseball game available, MLB 10 The Show is set again to provide fans with the best baseball experience this console generation with even more features and modes destine to quicken the heart, raise the stakes, and hurl you further into a true MLB baseball experience.  Holding more than 81% market share on PS3, more than 70% market share across all PlayStation platforms, and the #1 selling baseball franchise in video game history, The Show is proving once again to be the industry’s premier licensed Major League Baseball (MLB) game, both critically and commercially.

The long awaited Home Run Derby leads the deep features list in MLB 10 The Show for PS3.  Fully implemented in the season modes and available as a stand alone feature, Home Run Derby follows the current MLB rules and flow.  The MLB All-Star Futures Game will also be available within season modes in its correct timeframe (just before the Home Run Derby), as well as fully functional online leagues.

Additional new features for the PS3 game include “Catcher Mode,” the ability to call the game as the catcher, select pitches, and be the ultimate field general, just like Joe Mauer.  MLB 10 The Show will also offer daytime transitional lighting, a newly added “Movie Maker” menu giving the user the ability to select multiple replays to add to and edit a single movie, and 11 new stadiums.  Five new Minor League stadiums will be introduced, as well as a selection of classic parks available on the PS3 for the first time including Forbes Field, Crosley Field, The Polo Grounds, Shibe Park, Sportsman Park, and Griffith Stadium.

Online multiplayer has vastly improved this year to bring more of that competitive fire out amongst friends.   First and foremost, the game will detect and respond better to adverse network conditions and bandwidth has been reduced to help the speed and flow of online gameplay.  Along with the core online league play, where gamers can customize leagues including choosing players, teams, and length of schedule, MLB 10 The Show will now offer fully functional online season leagues!  The new online season leagues will save and display MLB Player stats, track player energy, allow for trades/injuries, and offer 40-man roster functionality.  Alongside this will be weekly live roster updates, available every week throughout the entire MLB season, tracking roster changes, addition of new MLB players (with correct attributes), and player attribute updates to reflect hot and cold streaks.  Lastly, The Show will offer the ability to view every game you've ever played online, complete with opponents, box scores, and game logs.  There is simply no better place to turn up the smacktalk and settle a little baseball rivalry than playing it out online in The Show.

The gameplay in The Show has been enhanced considerably with improved logic, animations and presentations resulting in a wider variety of hit types (including more choppers), improved ground ball friction, improved run down logic, and upgrades to the Throwing Meter, which will reflect each player’s arm strength based on attributes.  The ground ball friction will provide more realistic bounces and ground balls getting by the corner infielders when hit down either foul line allowing for extra bases when the ball rattles around in the left and right field corners.  Ball collision improvements now enable the ball to bounce off of any part of the batter's body and take the correct trajectory after impact.  If you dive for a ball and miss it, the ball can be smothered, kicked, and deflected, all outcomes following real life ball physics.  Comebackers to the mound can deflect off the pitcher’s body who can then turn a great looking 1-6-3 double play.  We have also added the always popular 3-6-3 double play, ability to rob HRs, dives, sliding catch plays, tumbles, rolls, over running bases, getting caught on a pick-off move when leaning the wrong way, base runner line drive reactions, multiple levels of check swings, and umpire reviews of HRs hit down the foul lines (they can get reversed!)—all new aspects of the gameplay that not only look great, but feel right.

MLB 10 The Show once again raises the overall level of detail and realism from customizable fan chants, to jumbotron animations, to crowd atmosphere.  Not to be outdone, stadium ambiance will be improved with the addition of HR/splash counters, fireworks, steam, noisemakers, towels, thunder sticks, crowd reaching over the rails, and crowd detail, such as interaction with vendors and placing Ks.  Mascots are also available for all teams and each will show off signature moves throughout the game.

The popular “Road to The Show” mode returns with version 4.0 featuring the addition of two new interactive training modes, new settings, and new presentations.  Interactive training will consist of a set of mini-games designed to improve a player’s fielding and pitching ability, adding to last year's introduction of batting and base running training.  In Road to The Show users will also have the new Game Watch and Game Completion options which allow the player to set how much of the game they wish to view.  “Franchise Mode” also returns to the game, including the 40-man roster, salary arbitration, waiver transactions and September call-ups.  Due to hit stores in March 2010, just in time for Spring Training, as the only officially licensed first party videogame exclusively for the PlayStation 3 (PS3), PlayStation 2, PSP (PlayStation Portable), and the PSP (PlayStation Portable) go, MLB 10 The Show is prepared to deliver a one-of-a-kind experience for all fans, new and old.

NEW FEATURES IN MLB 10 THE SHOW