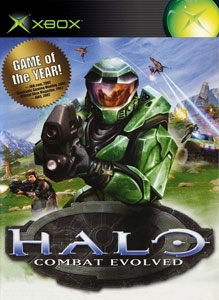 Halo® is a sci-fi shooter that takes place on a mysterious alien ring-world. Packed with combat, Halo will have you battling on foot, in vehicles, inside and outdoors with Alien and Human weaponry. Your objective: to uncover Halo's horrible secrets and destroy mankind's sworn enemy, the Covenant.

Features: * Huge weapon variety: Vanquish your enemies with a vast array of Human or Covenant weaponry ranging from the stealthy (semi-automatic pistols, Alien Needler guns) to the fierce (rocket launchers and assault rifles).

* Vehicle and foot-based action: Tackle missions any way you choose, be it storming an enemy base or taking the wheel or gunnery position of a variety of powerful vehicles. Vehicles range from stolen Covenant flyers and hovercraft to Human buggies, tanks and more.

* Indoor and outdoor combat: Fight seamlessly in Halo's ultra-realistic indoor and outdoor environments as you hunt the Covenant in dozens of single player missions and multiplayer battles.

* Intense multiplayer shootouts: Form a team, choose a role, and fight cooperatively with your friends, battle it out Deathmatch style via intense split screen combat or fight co-op with a friend through the single player missions.

* Reality-bending special effects: Halo features the most advanced graphic system on the most advanced gaming platform in the world. Gunfire rips off the screen, explosions light up a living room, and environments blur the line between your couch and fantasy.