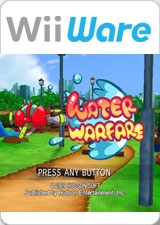 In Water Warfare, players go head to head or team up as they run around playgrounds and beaches to drench each other with squirt guns. They’ll be able to protect themselves with, what else, raincoats, towels and more. There are other items, like the umbrella, which can attack and defend at the same time! With different types of squirt guns, pick-up items, offline and eight player online multiplayer, there’s tons of squirt gun fun to be had. Throughout the game, players use the Nunchuk to control movement, aim using the Wii Remote, and can load up on different squirt guns, such as shotguns and rocket launchers, to soak their opponents.