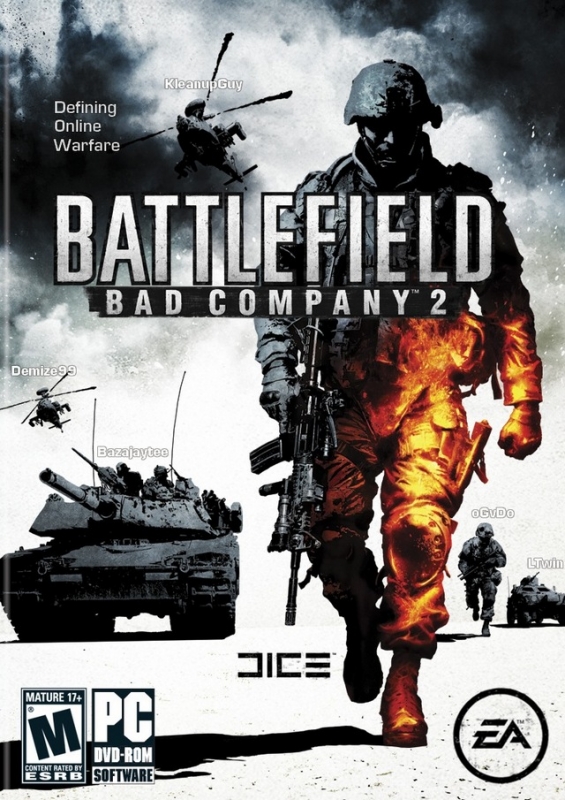 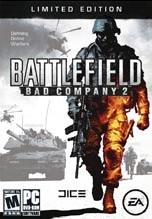 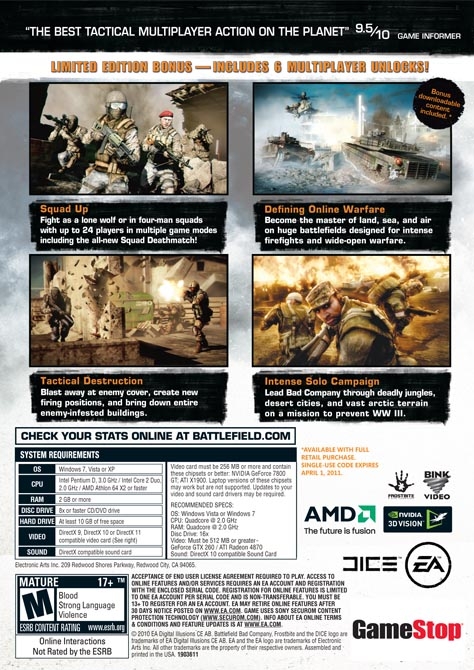 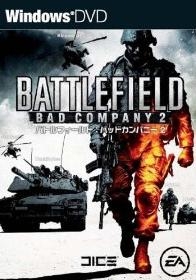 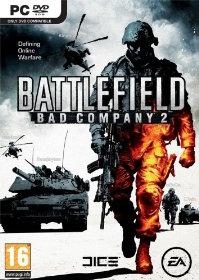 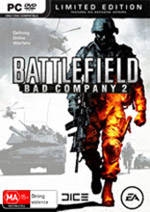 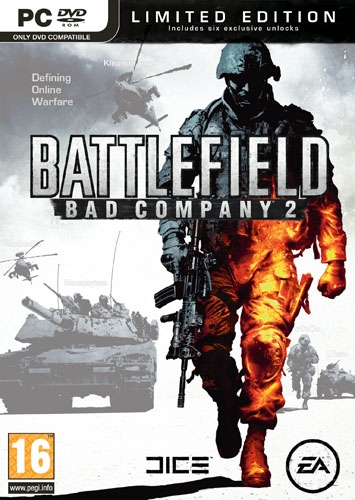 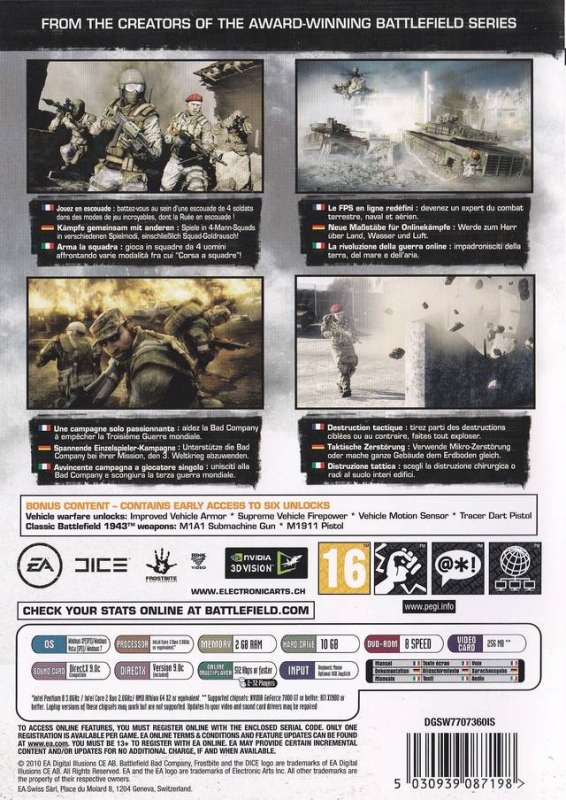 Battlefield: Bad Company 2 is DICE's second go-around with the spin-off of their own massively popular Battlefield franchise, featuring both true single and multiplayer gameplay. This time around there are brand new features, an improved single player campaign, the return of blood, and borrowed player stat features from Battlefield 2 and 2142. There are even some interesting incentives to purchase the game new.

To start things off, lets take a quick look at the purchasing incentives program DICE and Electronic Arts have come up with for buyers. Purchasers of a brand new copy of Battlefield: Bad Company 2 will receive a code allowing them do download free online class upgrades and two brand new maps. This content, being downloadable content, can't be resold second-hand or be activated on a pirated copy due to player registration. This is a truly interesting way to persuade people to purchase the game, and a great added bonus. While this does add value to new purchasers, incentives like this will not be factored into the scoring for this game.

The single player experience is probably the most unique part of this game. Bad Company 2's campaign is thirteen missions long and, depending on the difficulty, can take roughly seven hours to complete. The battlefields this time around are situated in the mountains on the outskirts of Russia, jungles of Bolivia, and various other locales. Before taking control of Preston Marlowe though, you play a quick prologue mission set during WWII when a small squad of soldiers find themselves neck deep in a secret mission to capture the Japanese's top-secret weapons. The entire story, while poorly told with mostly one-liners, revolves around B-Company trying to recover the same weapons.

One of the most impressive improvements in the game is to do with the AI. Throughout one's romp through the single player campaign, enemy AI can actually be pretty surprising. They work together, take cover when needed, and attack from some very interesting vantage points. This means that you have to figure out where your assailant is located before firing. Your squad mates' intelligence has also seen an improvement: when you are flanking the enemy, your squad will attack straight on, diverting the enemy's attention away from you; allowing for quick, but not always easy, pickings. As expected though, your squad mates can't die like you, so your enemies' well-being (or, preferably, lack thereof) is more important then theirs.

Difficulty is something that the single-player doesn't seem to have any consistency with. Snowblind, the most unique mission in the game, is probably the hardest. Difficulty does spike during other missions, but if you're playing on normal or hard, be prepared for a true test of wits and accuracy with whichever weapons you selected. Be prepared for a roller-coaster ride when it comes to the many challenges faced during this campaign.

Single player gameplay is general is pretty standard. Go from one place to another; kill everything at each point; hunt for secret weapons and the optional M-Com units. This formula makes up the large majority of the game, but there are a few vehicle segments, and the mission stated above, to break things up. Maps are also massive- which, at times, can be considered pointless considering how far you have to travel to get between points.

DICE's destruction physics engine dubbed "Destruction 2.0" has also changed how the game plays. Now, instead of destroying a few walls, you can take down entire buildings. No longer are there any truly safe places in which to hide from your enemies. If they have the equipment, enemies can destroy any and all structures. You won't want to be inside a building when it explodes and comes crashing down on you. Due to this, tactics that worked in older games no longer apply in single- or multi-player.

Beautiful visuals accompany the improved destruction. A strong system can push out serious graphics that allow for highly-detailed destruction. Textures pop with higher settings, as do character models, and lines are crisp and beautiful. On lower settings, visuals might not be as pretty, but they are still above average. Graphically, Battlefield: Bad Company 2 competes with the best of the games released in this genre over the last year.

The Battlefield franchise has always been known for it multiplayer gameplay, and this continues to hold true in Bad Company 2. This time around DICE has taken the already impressive gameplay mechanics that fans know and love, and changed things up, with improvements to the Frostbite Engine and overall feel of the game. You can join up to thirty-one other players in all out war on battlefields varying from snowy environments to sunny beaches.

One feature returning from earlier games in the series is Dog Tags. When you knife someone, you are rewarded with a trophy- that player's dog tags- to symbolise your victory. Other features making an appearance in this game include the returning weapons unlock system allowing for character customization as you earn experience, and re-introduction of blood. It is interesting to note that this is the first Battlefield game since Battlefield: Vietnam to feature blood without third-party modification.

The number of character class kits has been reduced in this iteration to four, the classes being Assault, Engineer, Recon, and Medic. With the removal of the Specialist and Demolition kits, gameplay involving the way in which you level up your character, and what modifications chosen to usehas been streamlined. This also balances the field of battle so that the player has a better idea of what they could be up against at any given point.

Brand new vehicles join the online fray. After including the new UH-60 Black Hawk, quad bike, two-man patrol boat, a personal watercraft, AA-gun mounted light tank, UAV helicopter, vehicle count totals fifteen. While all of these vehicles won't appear on the same map, correct use of available vehicles can be essential for the clenching of victory.

Audio is very important in this type of game. Players need to be able to hear everything around them accurately and realistically. DICE has managed to take their normal audio channels and sound effects, and clean them up so that even in snow, a foot step sounds correct when you and everyone else running around you can be heard sloshing around. Explosions rattle speaker systems. Echoes of gunfire can be heard at various distances. Everything seems to be spot on for multiplayer, and only a few minor audio drop-outs occur during single-player.

Overall, Battlefield: Bad Company 2 is a great shooter that continues DICE's legacy for creating excellent online gameplay experiences and adds a vastly improved story mode for single player. With the ability to play thirty-two players at once with massive destructible environments while having to come up with new strategies to defeat their opponents, there are hundreds of hours of fun to be had. If you are looking for the best shooter experience released during these past few winter months on PC, buy this game.