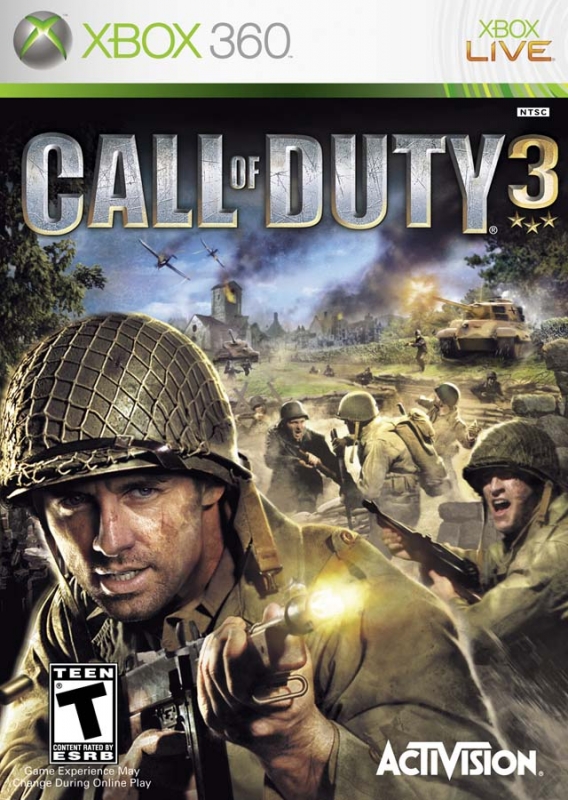 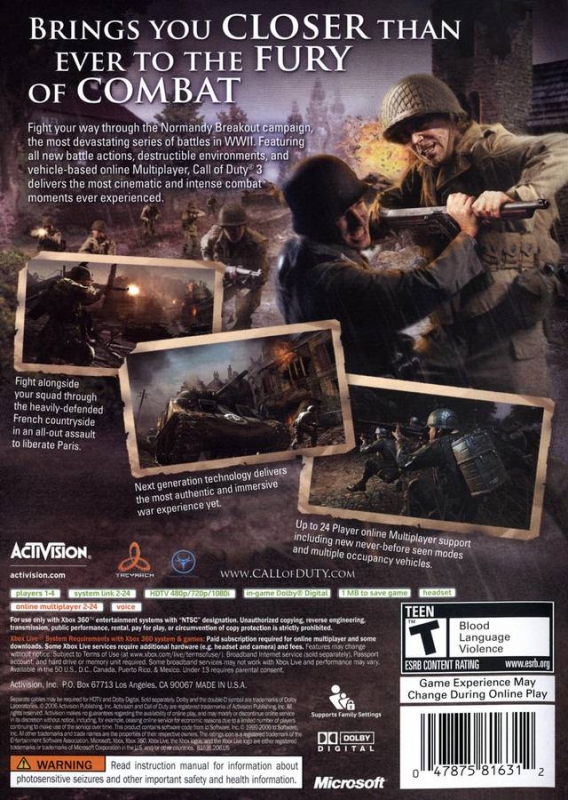 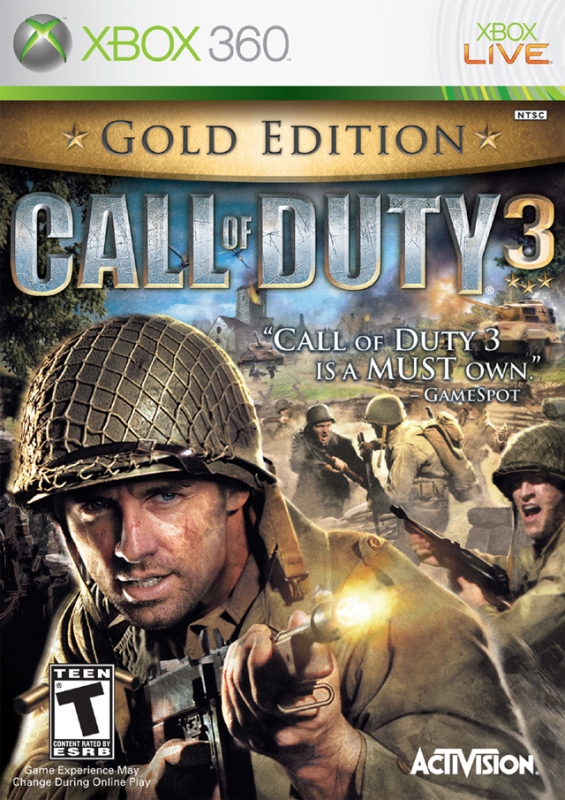 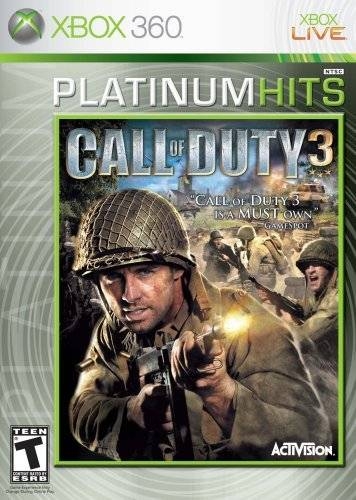 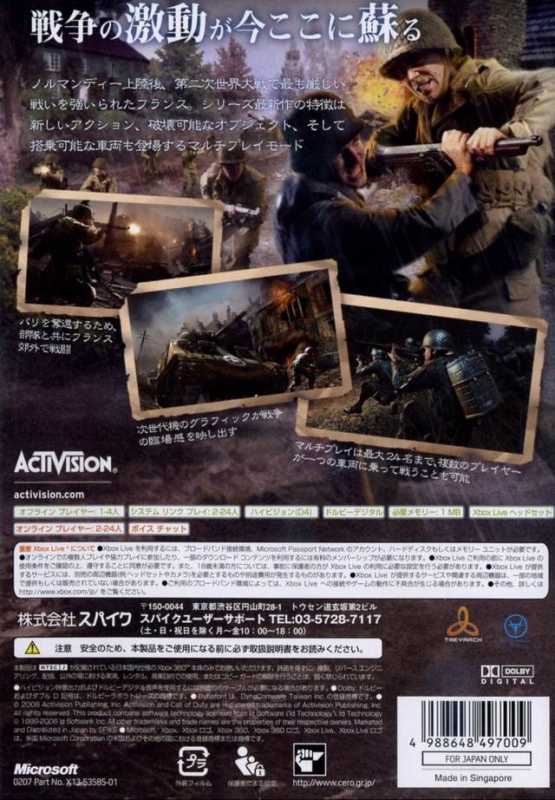 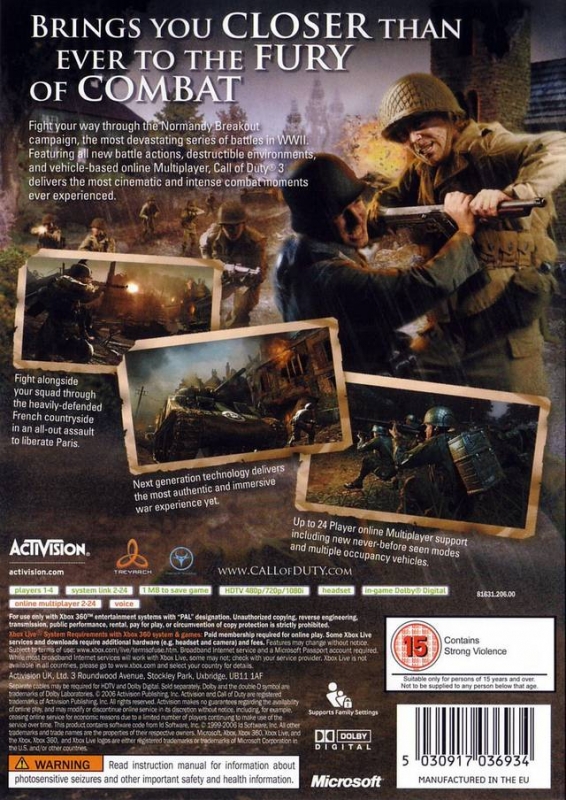 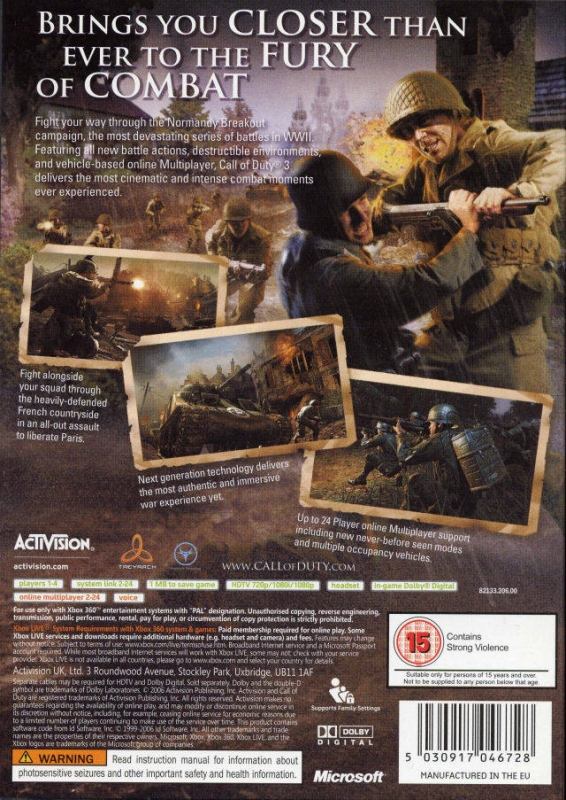 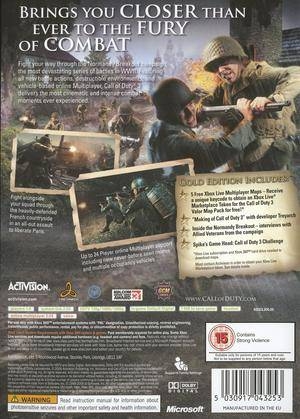 Presentation - 9.5
Gameplay - 7.5
Value - 8.0
CoD3 is really interesting. Takes the reigns from a new dev. (Treyarch) to start a cycle of development for CoD's: IW, Treyarch, IW, etc. and it turns out to break the mold with great success.

After the heavily successful CoD2 came out, some were anticipating that the franchise would start making a new main entry every year and with that tranisition IW and Treyarch would swap each year.  For the first time, Treyarch has taken the plunge into making their first main series CoD game (had made others spinoffs before).  With this, the dev's varied the gameplay to make it a different experience from what they were used to.  Some CoD fans may have disliked it, some may have enjoyed the change (me being one of them), but one thing's for certain; CoD3 is a very solid shooter with a breathe of fresh air but some flawed changes left a bit of a putrid smell in comparison.

Let's get one thing out now, CoD3 is a very sharp game for when it came out (and I still find it to be really good still).  For the limited time of 8-ish months given to make this game, CoD3's improvements were phenominal technically from that of it's predecessor.  Textures were quite good, particle effects, smoke, character models were decent, enviroments, color, sounds etc. etc. suffice to say the game looked really good and was fairly close to GRAW and Gears of War.  Suprisingly, the story was fairly well told as well with almost every character having there own personality without fumbling into the cliche type you'd expect.  The only real complaint, presentation-wise, is glitches.  There's enough for you to notice when playing both SP and MP but not enough to be a major burden.  I've even experienced falling through a glitch in the map to be completely under it as if I were in something like the Matrix. 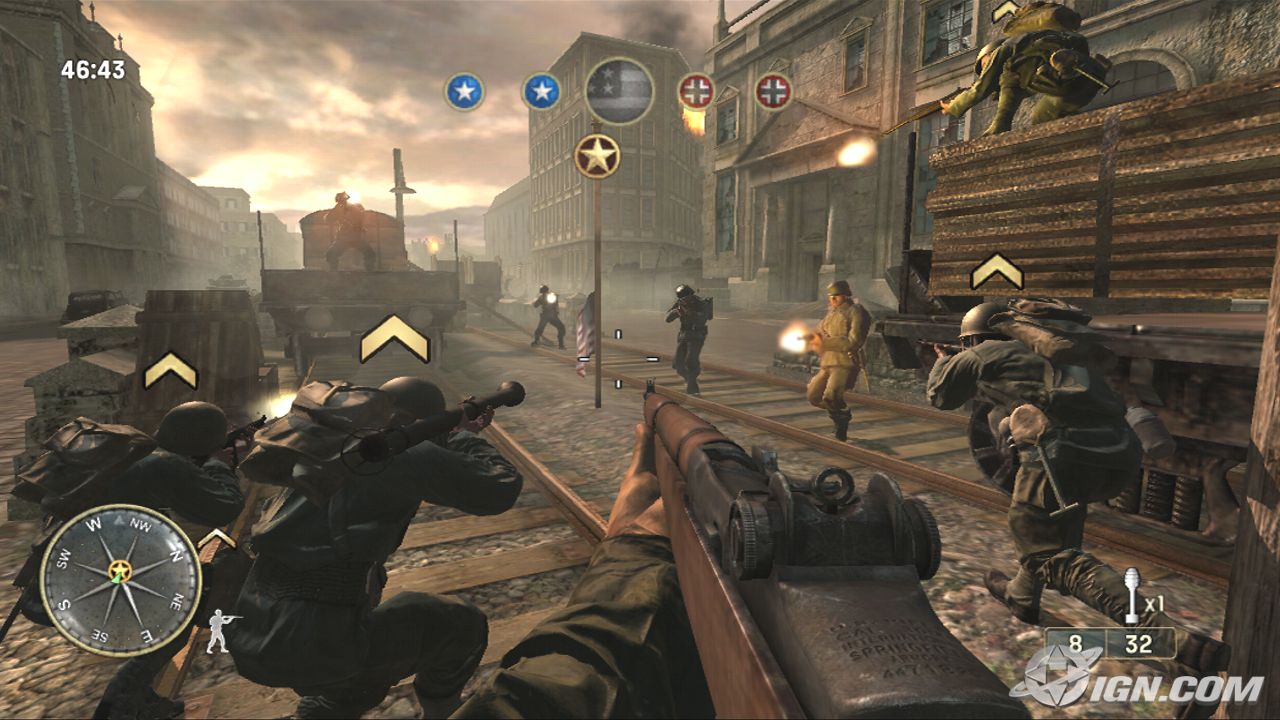 ^I'm guessing the guy with the bazooka has the upper hand:P.  With support of up to 24 players online, expect some explosive action like this.

CoD 3's story revolves around 4 different characters in 4 different countries' campaigns all with one goal in mind: liberate France.  You play as Private Nichols in the American campaign, Sergeant Doyle for the British/French resistance, Private Cole for the Canadian, and Cpl. Bohater for the Polish campaign.  Each of the controllable characters would involve doing certain tasks from pounding enemy positions to secure major roads for friendlies to joining with the French resistance for taking out certain German strong points and planning areas.  With a variety of objectives comes a variety of ways to completeing them, whether by tank, jeep, or random QTE encounters.  While it sounds interesting at first, the problem with this is that there's virtually no identity for the game itself.  For one moment you'll be playing at the game's strength (shooting of course) then walk around the corner to one of it's many weaknesses feeling that almost every idea one of the dev's had was put into the game when it was unneeded to begin with.

As stated before, the gameplay revovles around MANY different ways of taking out your foes with many of these ideas being uneeded but some being very welcoming.  There's many new things this CoD brings in comparison to it's earlier sequel:  Sprinting (in MP), QTE moments, vehicular combat (tanks, 2-p motorcycles, and jeeps), a Battlefield-esque MP having different character classes, cutscenes, "choking" grenades (hold the grenade button down longer so it'll explode sooner after it leaves your hand), and a new MP mode called War (very fun by the way).    There's quarrels to be had with many of these new features listed:  Why's sprinting only for MP?, Is there really any need for random QTE encounters?  In reality, it all just goes back to the reason that Treyarch just had a pool of ideas when it came to gameplay with no one carefully filtering which ones would fit best. 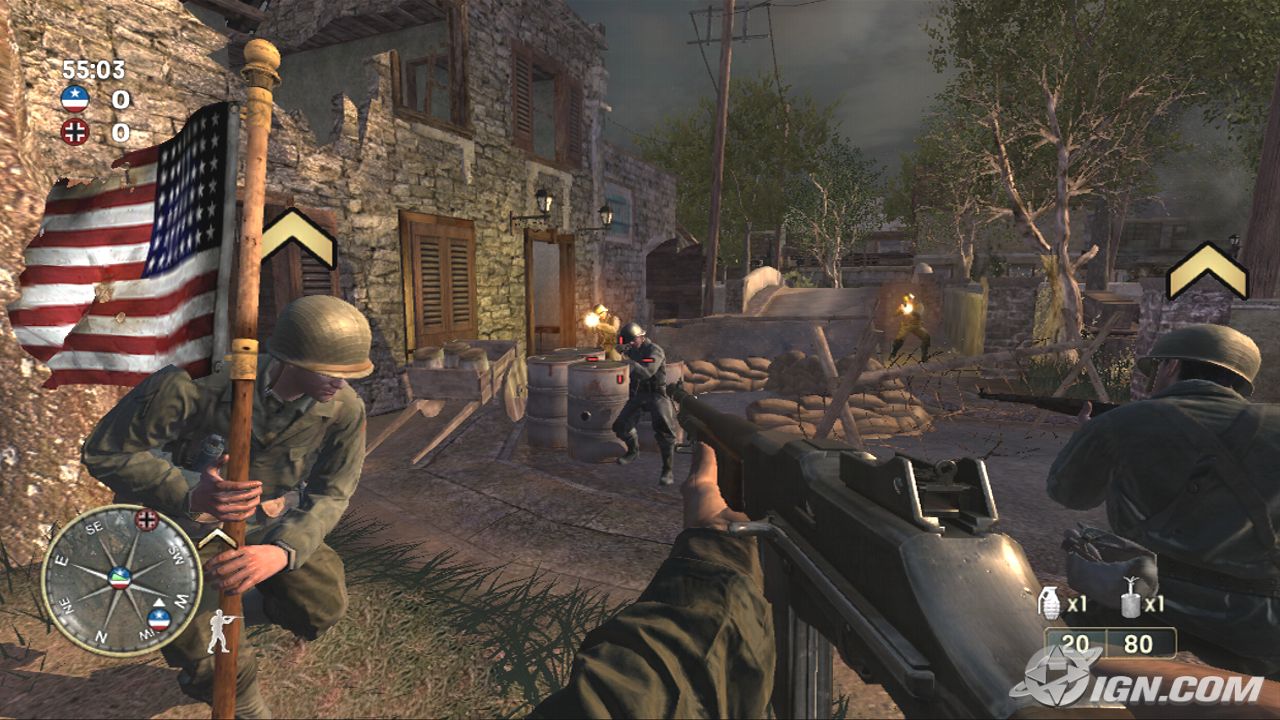 One thing that I really found Call of Duty 3 to be it's saving grace was really it's MP.  Suprising considering how much I found 3's story to be suprisingly good.  One of the reasons that made 3's MP a breath of fresh air was not just the battlefield-esque structure but the solid MP level design.  With support of up to 24 players (8 minimum without counting if they quite) you can expect to have some suprisingly intense battles for major choke points on the map especially when playing War.  While all other modes are standard from previous CoD's, War is about capturing certain points on the map (starting in the middle) while the flag raises itself for whichever side is at that highlighted point (the more people at the point the faster it rises).  When you capture that point you'll move on to the next which may be the final point or the 2nd to last point to capture, once the final's ones been captured you win the game or when 20 mins is up, the cumulative points are counted up to see who the winner is.  The class-based system is nice to see but the one quarrel I'd have with it is that regardless of class, majority of them can be play the same way just with different weapons so it still felt like every character was the same but with different weapons (some classes may have a tiny bit more health then others though).

To go more into detail about the MP, you have 7 classes: Rifleman, Heavy Assault, Light Assault, Medic, Sniper, Support, and Anti-Tank.  Each of which has a predetermined loadout, one with have a certain rifle or sniper rifle depending on your side while you start with 1 type of grenade and possibly a mine (depending on class).  As you progress in getting kills, captures, heals, or assists you'll recieve more mines and grenades when you level up to corporal (10 pts.) and sergeant (30 pts.).  While it's certainly a nice simplistic process, you'll be wondering why you can't change your weapons when you respawn but not your class like previous CoD's have done.  There's also no sense of class to it either or it's "halfsied", a support gunner does run slower with his bigger gun but there's no noticable difference in health or anything else.  This could be argued that it's a blending of a Call of Duty/Battlefield style which for the most part works out greatly but it has it's noticable flaws as well.

8.4   Regardless of the problems Call of Duty 3 has, there's still many new strengths not seen in a CoD game which brings an enjoyable break from the norm while still holding the Call of Duty brand proudly.  With some tweaks though, it still could've been better.

MP support of up to 24 players