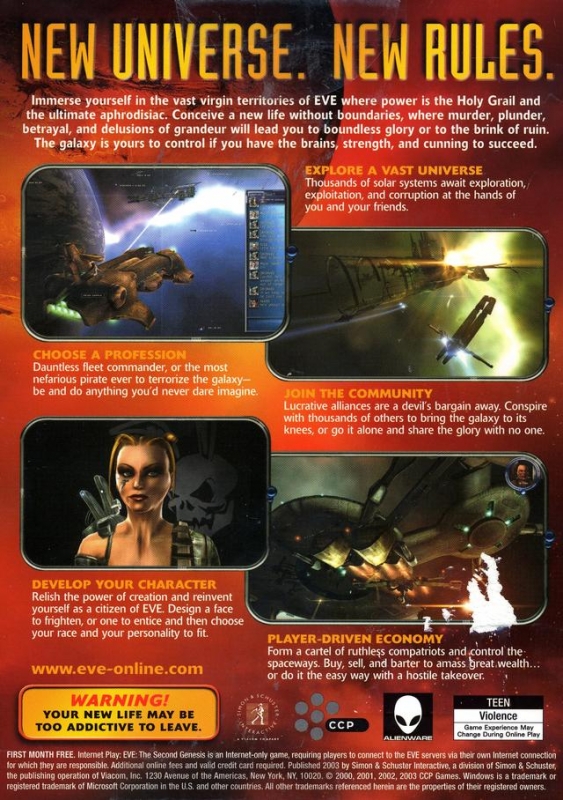 THE UNIVERSE IS YOURS TO OWN

Seek out fame. Seek out fortune. Seek out the most feared pirates and make your mark. With more than 220,000 pilots existing within one persistent universe, create your own epic story – from the moment you enter the vast galaxy as a humble pilot commanding a small frigate to the day you lead your own corporation against the tyranny of powerful factions. Grab the controls and set course toward your imminent destiny in EVE Online.

A DESTINY FORGED IN THE HEAVENS

As settlers explored the dark, unknown regions of space, they discovered a celestial port that led to a beautiful and expansive system. It was the gateway to a place they dubbed “New Eden.” Rich in minerals and resources, New Eden was bombarded with throngs of pilots hoping to stake their claims amongst fighters, pirates and corporations. Millions flourished in wealth and millions more died in warfare before the wormhole suddenly closed, severing the colonists from Earth – forever. A dark age fell upon New Eden for thousands of years before four dominant nations-states emerged:

* Amarr: Steeped in religious fervor strong traditions, they have the oldest tradition of interstellar conquest

* Minmatar: Toughest of the races, their natural instincts to fight were borne out of hundreds of years of persecution and enslavement

* Gallente: The most economically cunning of the bloodlines, they can go from friend to foe in the blink of an eye

* Caldari: An entire state organized for profit and determined to seize power by any means necessary

* Game Installation Disc, including all ten expansions up to APOCRYPHA

* 60 Days Playtime : TWICE as much bonus as most major MMO’s.