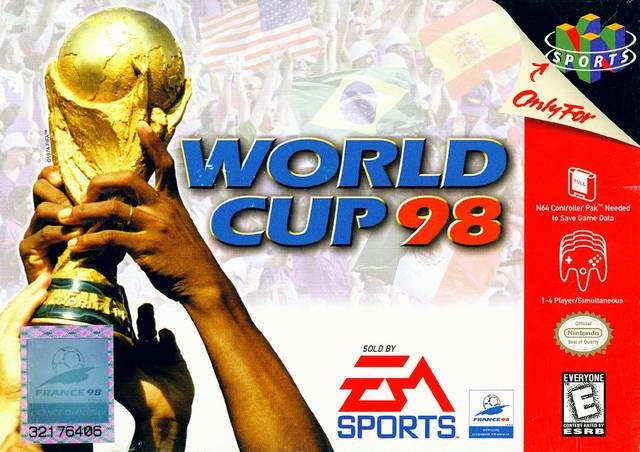 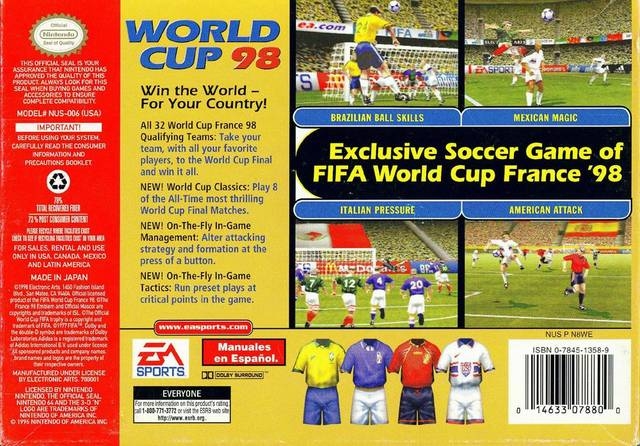 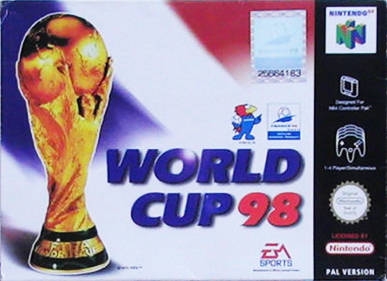 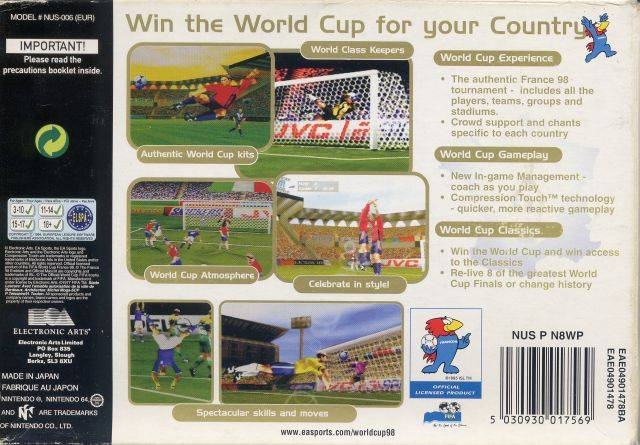 Just what the heck is going on with World Cup 98? Is it a new game? Is it FIFA 99? Or is it just a rehash of the old version and an attempt to remind everyone, six months after FIFA 98 came out, that EA splurged and bought the license to the actual tournament itself this year? One thing for sure, it has a lot fewer teams on the roster. Thankfully it also has some new tactical elements and in-game management options that add a lot to the game's already awesome gameplay. But is it worth it? Well, that's sort of a personal question.

Like FIFA 98, World Cup 98 is chock-full of moves. There's plenty for the novice to learn, including flick-passes, long volleys, and diving headers on goal. For the adept, there's an easy to use passback system, to make the most of those ample corners and get the opposition's defense sweating a little. Football illuminati will find a fistful of special moves that are a cinch to pull off, and after an hour or so, you'll be bicycle-kicking like Pele and performing a bizarre array of MC Hammer-inspired footwork to mesmerize and confuse the opposition. The beauty of both FIFA 98 and World Cup 98 is that, despite the volume of control possibilities, you can still play a pretty competitive game without any of the fancy stuff. Just run, pass, and shoot. And pick up the rest on your own time.

World Cup 98 has a wealth of new in-game management and strategic control options. Before the game, you can set up three different custom formations (labeled IGM 1, 2, and 3) that can be switched during play at the touch of a button, er... OK, three buttons. In addition, the new version offers plays you can run, including an offsides trap, to (guess what?) draw the enemy offsides, a through ball run, to set up breakaway passes, and more. These simple plays provide an easy and powerful means to control non-ballcarriers, allowing more advanced players to pick apart the opposition. It's funny how things like a play book are taken for granted with a football title, yet we're so refreshingly surprised when a rudimentary one shows up in a soccer game. All cynicism aside, it's a great addition to gameplay.

While there are dozens of new real-time management options out on the pitch, there's really nothing new behind the scenes. Granted, FIFA 98's plethora of management features remain. You can still go berserk and set your team's strategy to its offensive maximum, and set each player's individual attacking bias and aggression level to full, and then watch the rabid zealots swarm around the ball like angry bees (and lose the game with one good enemy through-pass). You can still create a bizarre race of puffy-haired redhead clones, and you can make your front line supersonic at the expense of all ball-carrying skill by tweaking their stats. Versatile, but nothing new.

Like its predecessor, World Cup 98 has terrific AI, which means more than just the confidence that when you pass the ball blindly downfield, there'll be someone there to pick it up. The CPU defense is tough on hotdoggers. You won't get past the amateur difficulty setting by just holding down the sprint button and sending your center striker downfield on a solo mission. Thankfully, a smart AI encourages you to find creative ways to move the ball around the field and exploit enemy weaknesses. The default settings for player aggression leave your CPU-controlled teammates a little lackluster, especially on defense. However, with a couple of tweaks in the team management screens, they'll start going for it. You'll also find that the AI takes team ratings very seriously, and switching teams feels like playing a different game entirely. After missing pass after pass with Jamaica, it's refreshing to really kick some ass with Italy. That said, the AI feels essentially the same this time around.

Graphically, both the original FIFA 98 and this version are loaded with amazingly lifelike polygonal animations of dozens of moves. There is no denying the realism of the short flick-pass or the sheer joy of sadistically slide-tackling the enemy goalie after he denies you your glory. Red card, shmed card, it's just so darn fun, and it looks so good you won't be able to resist. EA promised that the new version would offer a significantly higher frame rate and smoother screen scrolling, but if anything, World Cup 98 feels choppier than its predecessor. The frame rate seems lower and the anti-aliasing is less smooth on the players. Although, the entire screen seems a little less foggy, and more in focus, so perhaps they've just removed a layer of the N64's patented soft-focus visual trickery. The most noticeable visual improvements seem to have occurred in miscellaneous graphical trivia. The jerseys look better. The various option screens have all been given a face-lift. Plus, post-goal grandstanding (and reciprocal goalie pouting) has been expanded to include a number of new animations. Some of these goalies get pissed. Unfortunately, product placement has gone from cute (Fuji ads on the sidelines) to irritating (the score is now brought to you by Snickers - right on the score panel - every time). Argh.

Fantastic commentary and an unlockable set of eight historically brilliant World Cup-winning teams from the past round out the game. Is it worth it? Well, downsizing from nearly 200 teams to only 48 is pretty drastic, but only the die-hard real-life soccer enthusiast would probably even care. Most of us are content to duke it out with Italy or Brazil and probably won't miss Antigua. However, it somehow irks me that the perfectly rendered stadiums are all in France. Yeah, yeah, I know. That's where the World Cup is happening this year - France. Francophile or not, die-hard soccer fanatics will find that the added tactical possibilities of World Cup 98 are worth the ticket price. The rest of us may want to just wait for the next FIFA game.