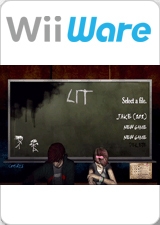 Dark creatures have taken over Jake’s high school, and it’s up to you to guide him through each classroom in order to be reunited with his girlfriend Rachael. Existing light sources must be used smartly to create bridges of light for Jake to cross. One false step, and Jake gets pulled into the darkness. Along the way he’ll encounter twisted versions of his school’s faculty, which must be battled in order to advance. LIT is a horror/puzzle game that requires the Wii Remote and Nunchuk controllers. It contains 30 levels, five boss battles, replay modes, and several unlockables including multiple endings, Dark Mode timed challenges, and an unlockable character.