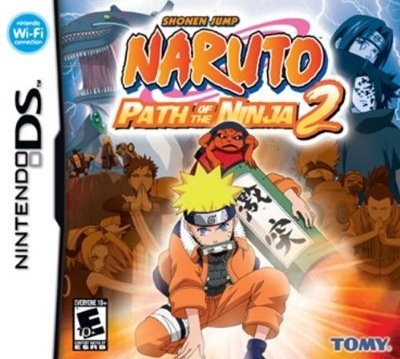 Lead your ninja squad to victory against all new, mysterious enemies! TOMY Corporation and D3Publisher present NARUTO: Path of the Ninja 2, the latest in the popular RPG videogame series this fall as Naruto and his friends take on a brand-new mission. The completely original storyline will test the resolve of aspiring ninja everywhere as they use the DS Touch Screen to explore the world, solve puzzles, and unleash devastating jutsu attacks. The expanded roster features 30 playable characters from VIZ Media's hit television series NARUTO, currently running on Cartoon Network. Improvements to the battle system will give players more options than ever before as they make use of the newly-added Squad Leader and Ninja Tag systems.

* All-new, original storyline - Players guide Naruto and his squad as they attempt to complete a brand-new mission and battle never-before-seen enemies.

* Extensive character roster - With thirty different characters to choose from and the new Squad Leader and Ninja Tag systems, players have more squad-building options than ever before.