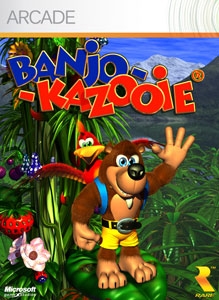 Back in the day Rare was on top of the world. They were constantly pushing out new, and sometimes innovative, games year after year for the N64, with the likes of Donkey Kong 64, Goldeneye 007, and their grand opus, Banjo Kazooie. After the huge success of Super Mario 64, many other games tried to copy it, with none coming as close as Banjo Kazooie. Now, it's been remade for XBLA, with slightly buffed up graphics and some leaderboards, but does it stand the test of time, or should it go back to where it came from?

STORY
Like most platformers back then, the story was simple, and unimportant. Basically, the evil witch Gruntilda has captured Banjo's sister Tootie, so she can transfer Tootie's beauty over to her. It's up to Banjo and his bird pal Kazooie to rescue Tootie and finish off Grunty.

As I said, it's a simple, yet slightly chamring, story. You won't care much about it while playing though.

DESIGN
Basically, there are 9 different levels connected by an overworld that you must traverse through. In each level, there are 10 jiggies you must collect. These jiggies are used to finsih various puzzle boards, so you may unlock the next level. There are also 100 notes in each level, used to open various doors in the overworld, allowing you to explore more of Grunty's castle and find new puzzle boards to unlock more levels. The notes are scattered throughout the levels, while the jiggies are found through various different ways. It's a tried and true formula and it work great in this game.

Throughout the game, you'll also meet various characters. Bottles the Mole will teach you new moves, Mumbo will turn you into various animal or objects, that can only be used in the level you were transformed in, and Brentilda, Grunty's sister, will tell you various gross facts about Grunty that are used later in the game. Gobi the Camel also shows up a few times as some great comic relief. Each level also has their own unique characters. For example, Treasure Trive Cove has a fellow named Blubber while Freezeezy Peak has Boggy the Polar Bear, who shows up in later games in the franchise.

One of the few new features are the leaderboards, to see how you rank up against other people, in relation to fast you completed each level. Another new feature is that now, when you complete level, the notes you collected will be permanently collected, unlike in the original version where it only saved your high score, menaing if you went back to the level, you would have to recollect all the notes.

So basically, the game has a simple design, which is easily compared to Super Mario 64, but that is never a bad thing.

GAMEPLAY
There are many, many different moves in this game, way more than in other platformers. Most are used in conjuction with Kazooie. Examples are giving you an extra boost when jumping, shooting eggs from her beak, using her beak to stab people or using her as a protective, golden shield. Some Banjo specific moves include punching and rolling. One you will use quite often is using Kazooie to run faster; Banjo is just too slow by himself. Many of these moves are used in various situations, usually to get a Jiggy or get to another part of the castle.

As mentioned earlier, Bottles teaches you most of the moves, so even if know how to use them beforehand, you won't be able to until he actually teaches you. Besides just Banjo and Kazzoie moves that are performed by themselves, there are some that need ammo, or an item. For example, flying uses red feathers, the protective shield uses gold feathers and shooting eggs needs, well, eggs. There are also various shoes, like runnign shoes to go even faster or boots to walk through normally hurtful terrain, though these can be only be used for a set period of time.

All these great moves make for a thoroughly enjoyable game.

PRESENTATION
First thing you will notice is that this still looks like an N64 game. It does have alot smoother and brighter graphics than the original version did, though.

The next thing you will notice is the AMAZING music. I love it. I constantly hum it at random times, and I'm sure you will too.

Another thing you may notice is the lack of voice acting, which was normal for the time period. Instead you get text that is accompanied by random garbles from each character. Luckily, these garbles don't get too annoying, at least for me.


All in all, this is a great game; it's one of my personal favourites. The levels are varied and large, the music is catchy and there is a wide plethora of moves. If you haven't experienced this classic, what are you waiting for?