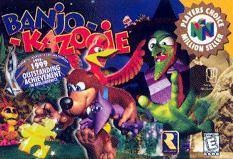 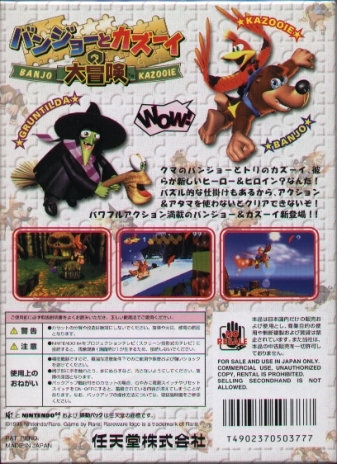 Banjo-Kazooie is a 3D platform/adventure video game developed by Rare and published by Nintendo in 1998 for the Nintendo 64. The game stars a bear named Banjo and a bird named Kazooie who set out on a quest to rescue Banjo's sister, Tooty, who has been kidnapped by the witch Gruntilda. Along their journey, Banjo and Kazooie receive help from Mumbo Jumbo the shaman and Bottles the mole, as well as from various other characters in smaller roles.

It was originally known by the project name Dream for Super Nintendo, which starred a boy named Edison who got into trouble with a group of pirates lead by Captain Blackeye.[1] After its code was transferred to the Nintendo 64, it was shown at the 1997 E³ as Banjo-Kazooie. The game received a significant amount of hype, partly due to being marketed as the game that would be to the N64 what Donkey Kong Country was to the SNES in terms of an advancement in graphics. Originally, it was supposed to be released as Nintendo of America's big holiday game for 1997 with a Taco Bell toy promotion lined up, but Rare needed to delay it several months. Instead, Diddy Kong Racing took its place, and with Banjo as a character in that game as well, it turned B-K into an incidental spin-off of the Donkey Kong franchise. Banjo-Kazooie went on to become one of the most popular games for the console.