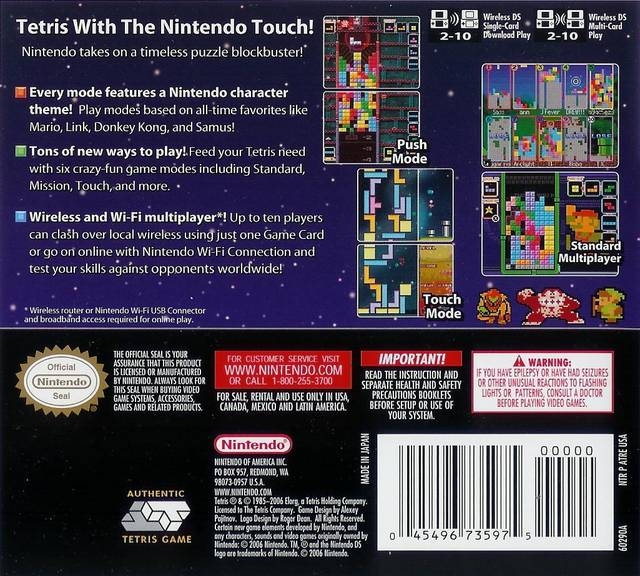 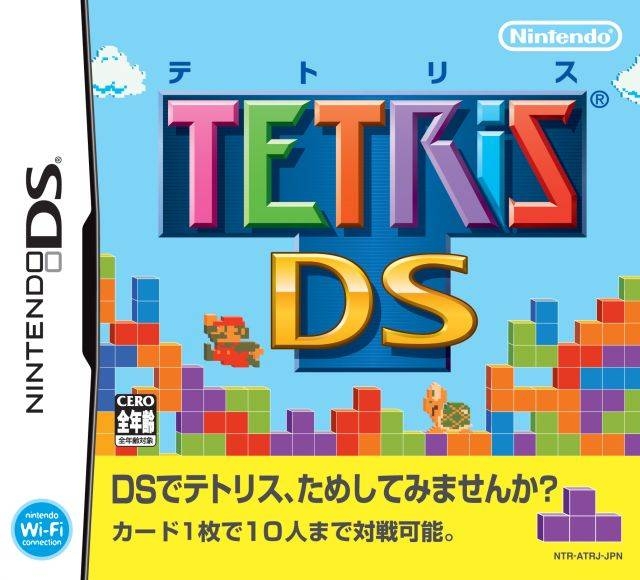 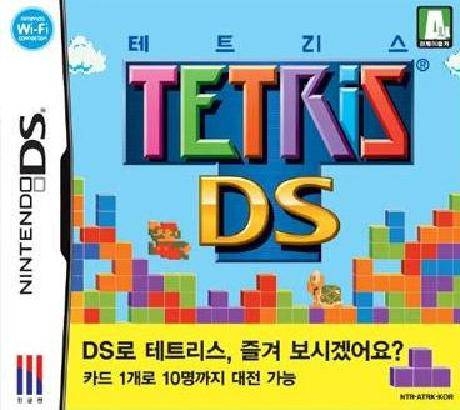 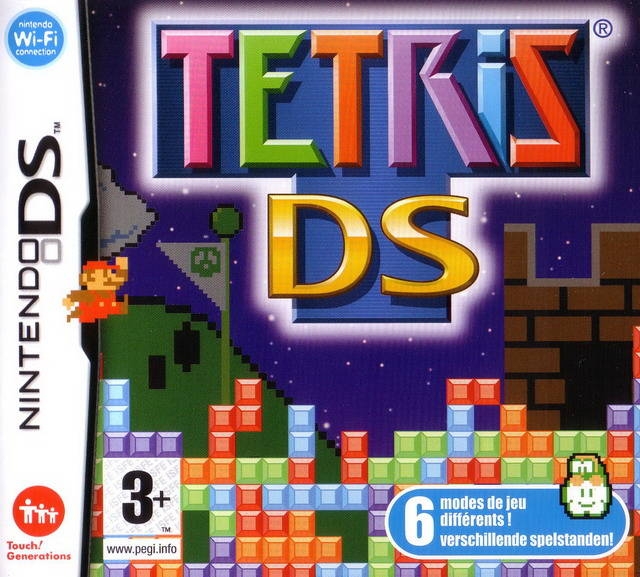 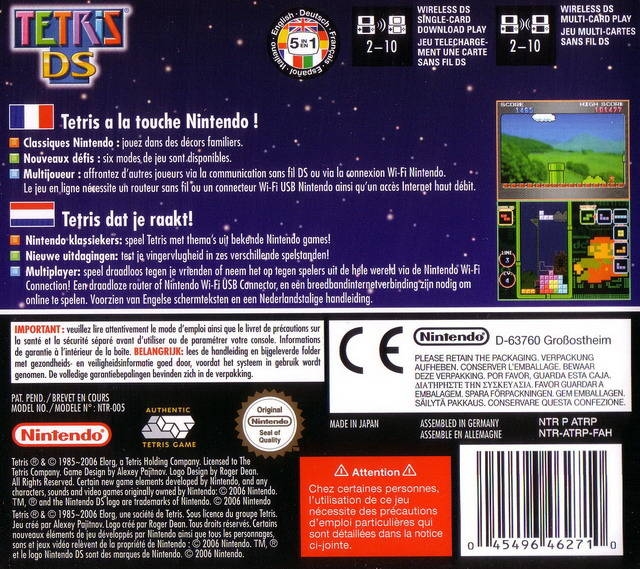 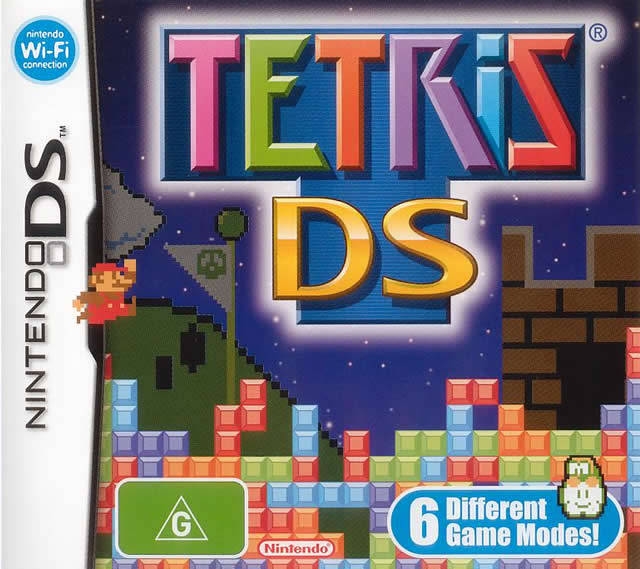 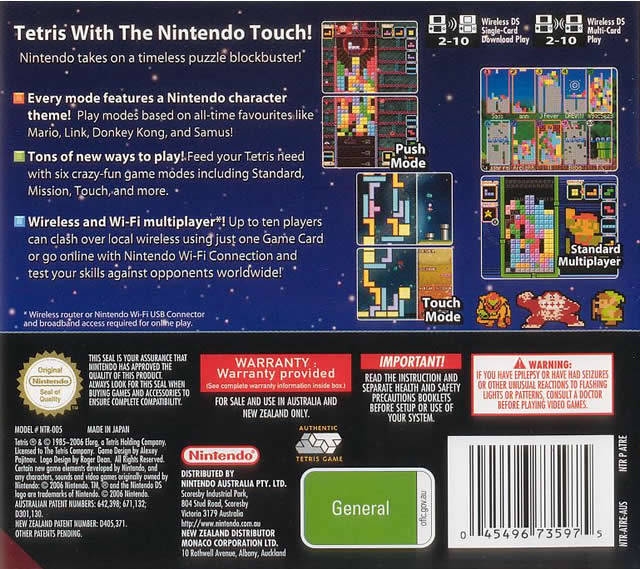 Everyone agrees: Tetris is one of the most popular games ever. But Standard mode is only the starting point of this stunning game.

Touch Mode -- Only Possible with the DS!

At the top of a heap of Tetriminos sits a cage of balloons inspired by the NES classic Balloon Fighter. Use the stylus to touch and slide the Tetriminos to clear lines and drop that cage ever closer to earth. If you can get the cage to hit the ground, it will open and the balloons will be set free.

In early levels, players can tap blocks to rotate them just to fit into the open spaces. Touch mode gets really challenging, though on the tougher levels, where you can't rotate the Tetriminos. Think hard and carefully plan your moves. There's no time limit in this brain-bending mode.

Once you play Touch mode, you'll wonder why no one has thought up this simple yet incredibly addictive puzzler before.

Push against friends locally via the DS wireless connection or all over the world via Nintendo Wi-Fi Connection.

Themed to the arcade classic Donkey Kong, players must clear lines in an attempt to push the other player to the edge of the screen. Clearing two lines at a time moves the screen down and pushes the opponent into the red zone. The frantic action leads to abrupt changes of momentum. All it takes is a few well-timed pushes to quickly end a game.

Push mode can also be played solo vs. the CPU.

Instead of controlling the flying Tetriminos, gamers control a flying core of blocks. Maneuvering in a classic Metroid setting (you even get to destroy Metroids), gamers twist and move that core to catch the Tetriminos.

As pieces fall, the core of blocks turns into a mass that can grow to unmanageable sizes if a player isn't careful. Falling Metroids will deplete your player's energy if they touch the mass of blocks. To keep the core of blocks under control, you'll need to form a solid square, then detonate it to refill the energy meter.

Catch mode is the ultimate Tetris game of survival.

Clear all the blocks using only a few Tetriminos in this innovative mode themed around the Game Boy classic Yoshi's Cookie.

You are given lines of blocks and a predetermined set of Tetriminos. Use the stylus to choose, rotate and drop a Tetrimino. Each drop has to clear at least one line. Often, the obvious choice isn't the right one.

There's no time limit, so you have all the time in the world to ponder your next move. With 200 puzzles, gamers of all ages will be engrossed for hours.

In this Legend of Zelda-inspired mode, you are given scenarios to complete, such as clear two lines at once, or clear lines with a specific Tetrimino. Move quickly -- if you take too long, you'll be hit with junk blocks.

You can play an endless Marathon game. In Time Trial, clear 10 missions as quickly as possible in Time Trial. If your Zelda-inspired heart meter runs down, the game is over.

This is the place for classic Tetris action! Gamers can play traditional Tetris solo before a Super Mario Bros. backdrop or battle others nearby or around the world!

Up to four people can battle around the world with Nintendo Wi-Fi Connection and see how they stack up against others on the leaderboard on NintendoWiFi.com. Additionally, Tetris DS lets up to 10 people battle at the same time via wireless LAN. All you need is one Tetris DS Game Card and a DS for each player!

For each ten levels cleared, you'll open up a new Nintendo-inspired theme. Excitebike, Ice Climber and Duck Hunt are just a few of the retro themes you'll love!