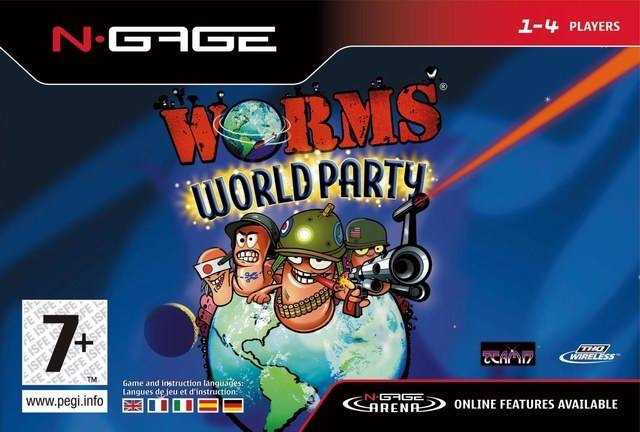 One of the world's wackiest, addictive, and enjoyable games hits the N-Gage in its most multiplayer online-focused form to date! Worms World Party features globally appealing humor, habit-forming multiplayer match-ups, and a myriad of game options to keep you coming back for more. Do you want to get your hands dirty in a quick firefight or exercise your generalship in a long, thought-out wormfest? We put control in your hands. Why? Because worms don't have hands, silly! In this turn-based action strategy game, teams of humorously animated worms wage battles across weird, randomly generated landscapes. Single player modes include training missions to hone your creative attack and lightning-speed decision making skills in deathmatch and mission-based games. Unleash mutant worm-destroying sheep, fierce bazooka cannons, and ancient Kung Fu powers on unsuspecting worm opponents. The more worms, the better: 2 people can go head-to-head against each other over a wireless Bluetooth connection, or have a 4-way battle in the N-Gage Arena. Because N-Gage Arena play is turn-based, the speed of your GPRS connection won't affect the quality of gameplay. Test yourself in tournaments, including "Worm King" elimination and "Survival of the Wormiest". Matchmaking helps you find other gamers by skill level or time zone. There's more than one way to top the global rankings in the N-Gage Arena, from top scores to worst friendly-fire offender to most boring worm.