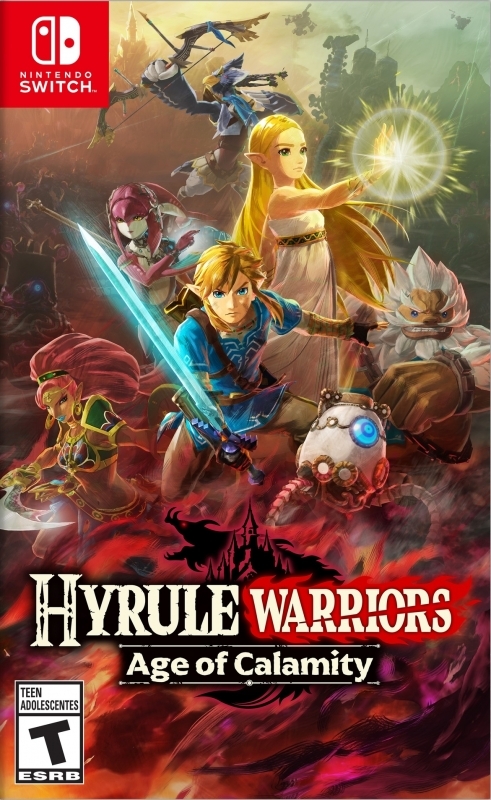 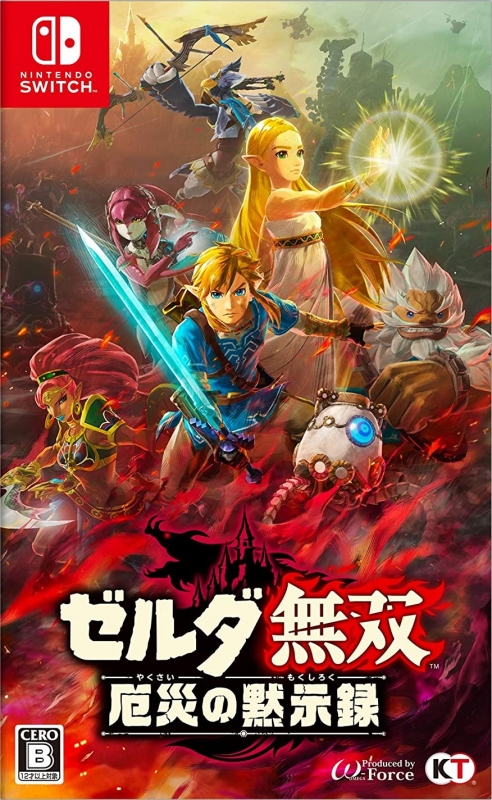 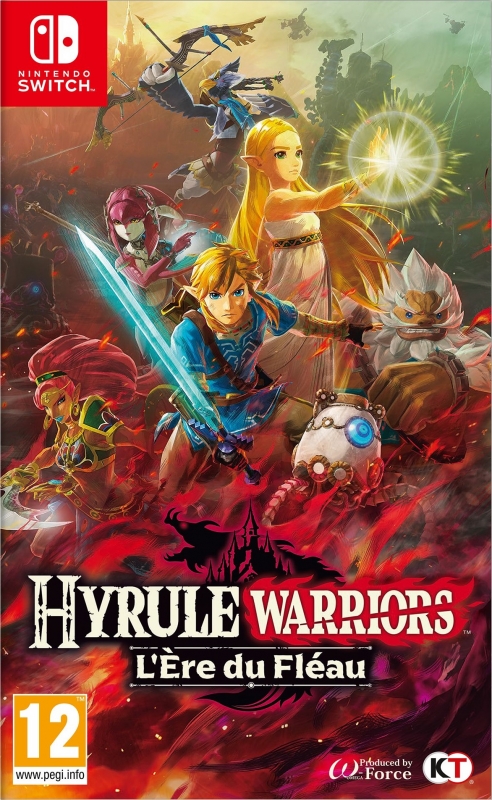 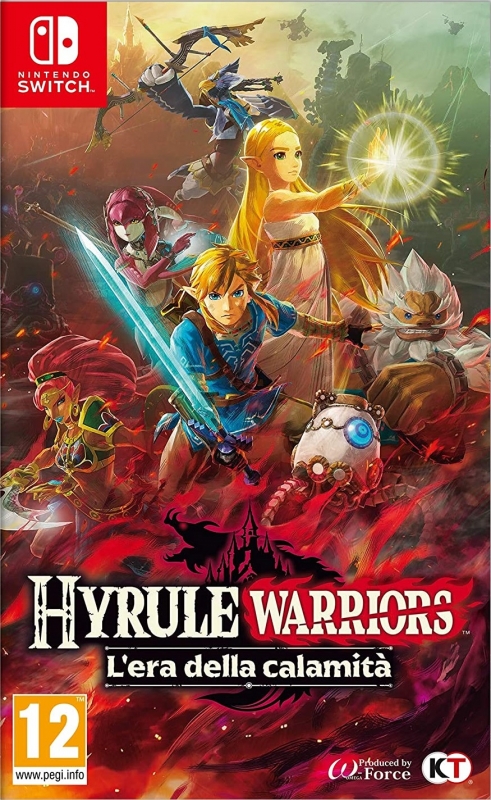 A calamity of disappointment

The Legend of Zelda: Breath of the Wild has certainly been one of the most influential titles of the past decade. Perhaps nothing solidifies that more than it being the first Zelda title to receive both a direct prequel and sequel. Hyrule Warriors: Age of Calamity fills the role of the former, focusing on events set 100 years before Breath of the Wild, but played through a more traditional Warriors gameplay format. Is this mashup of series a match made in heaven, or yet another disastrous calamity to befall Hyrule? 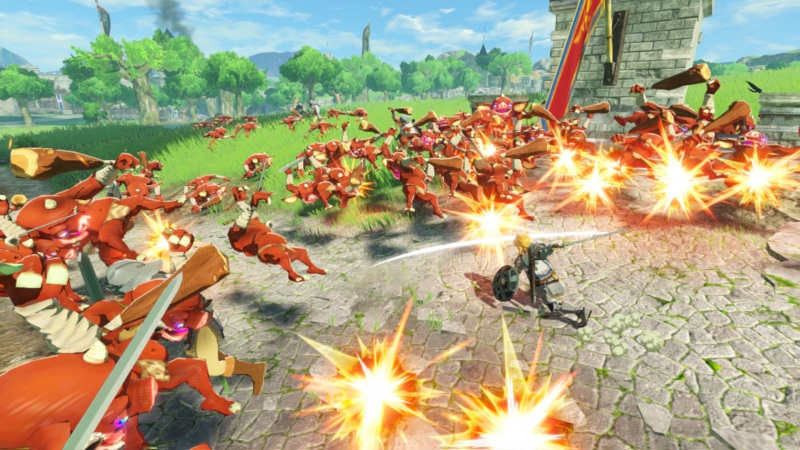 Right off the bat, there are some really nice aesthetic touches here that make Age of Calamity feel like a prequel to Breath of the Wild rather than just a BotW-themed Warriors game. Rather than simply displaying missions, shops, and the like through drop-down menus as in previous Warriors titles, Age of Calamity provides an overview map of Hyrule and dots it with various side activities and battles. It’s a nice little touch that admittedly doesn’t do a whole lot to impact the gameplay, but adds to the immersion factor.

On the other hand, there are some less-than-desirable aesthetic elements that do negatively affect gameplay. The decision to reuse the Breath of the Wild engine is one that presumably saved a ton of time bringing over character models and environments, but it becomes clear pretty quickly that it wasn’t designed for fast-paced action. The game will often struggle loading in textures and suffer significant framerate dips on specific levels and/or using certain screen-clearing attacks, and even at its best Age of Calamity is only able to reach 30 FPS, often dropping into the 20s. Things don’t fare any better with multiplayer, with constant dips below 15 FPS. Some sort of option similar to prior Nintendo Warriors games, which allowed players to sacrifice resolution for performance, wouldn’t have been amiss. 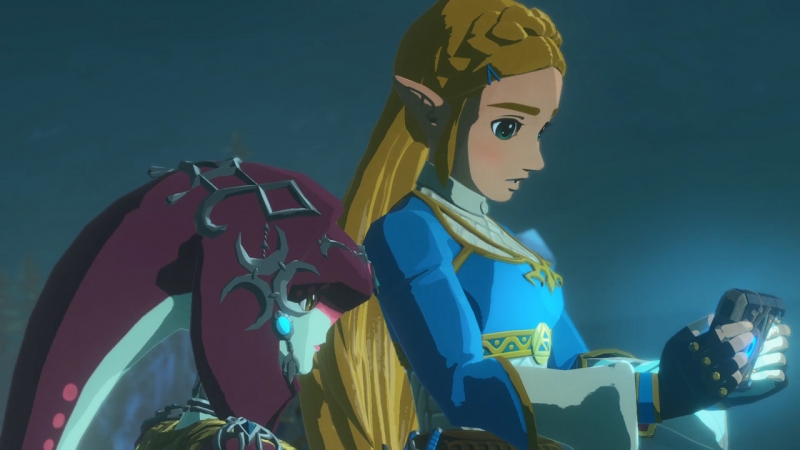 Another trade-off comes in the form of Age of Calamity’s environments. Prior Nintendo Warriors games, as well as most Warriors titles in general, primarily used sparse, open-ended maps with flat terrain, where individual forts were connected by open fields or hallways. This made for consistent, if not especially interesting, level design. Age of Calamity foregoes this in favor of environments with far more verticality and detail. While this is a significant plus aesthetically, it winds up being a detriment to gameplay at points, as it becomes far easier to get stuck or caught on the terrain while attempting to circle around an enemy or dodge a series of attacks. This comes to a head during one particular mid-game boss fight which takes place in an environment littered with obstacles, and it’s rather frustrating feeling like the battle is just as much about fighting the terrain as it is the enemy.

The core combat for Age of Calamity is fairly comparable to prior Warriors games, with light and heavy attacks, as well as special moves that require filling a meter to perform. Battles let you bring in somewhere between 1-4 characters per fight, and the battles that allow you to bring in multiple combatants will let you switch mid-battle between fighters. There’s less of an emphasis on territory control and base management than prior titles; you’ll almost never find yourself in a situation where you have to scramble to defend an attacked base, and in some cases the game just doesn’t even bother giving you any territory you need to control and just lets you run wild. I find this a little disappointing; while the “tactics” behind Warriors' base control were never particularly advanced, it was at least another much-needed layer of complexity to consider when planning where to send characters. 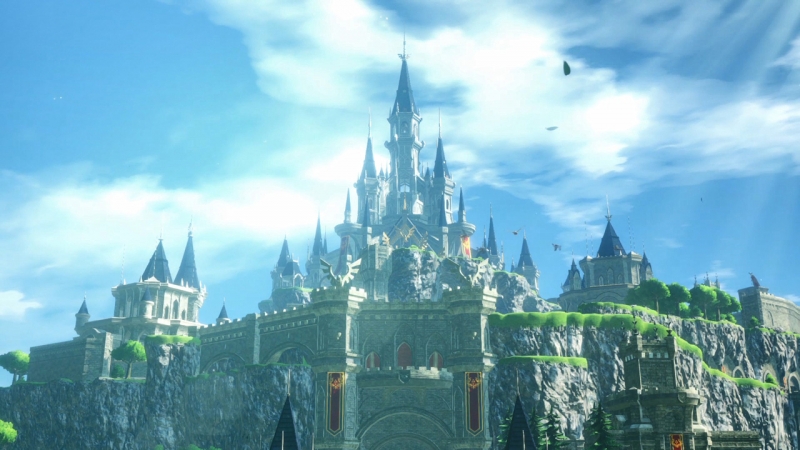 On the other hand, one area where this game has stepped up significantly from its predecessor, the original Hyrule Warriors, is in terms of boss fights. These are mostly based on the primary mini-boss and boss antagonists from the original Breath of the Wild (Lynals, Hinoxes, Guardians, etc.), and are actually built around the combat system rather than simply being a game of wait to use the specific item. I’d highly recommend playing the game on very hard almost exclusively because of them; they wind up being some real tests of skill and how well you can use your characters.

And speaking of items, perhaps the biggest difference between Age of Calamity and the Hyrule Warriors is the inclusion of the various runes from Breath of the Wild as gameplay elements. These function somewhat similarly to the dungeon items (bombs, bow, boomerang, hookshot) from the Hyrule Warriors. Tougher enemies will often flash with a symbol above their head corresponding to one of the four runes just before performing an attack, and choosing the correct rune will stun them briefly. In practice, it doesn’t wind up being much more than a contextual button press, but they are at least implemented a bit better and don’t kill the pace like the dungeon items did in Hyrule Warriors. 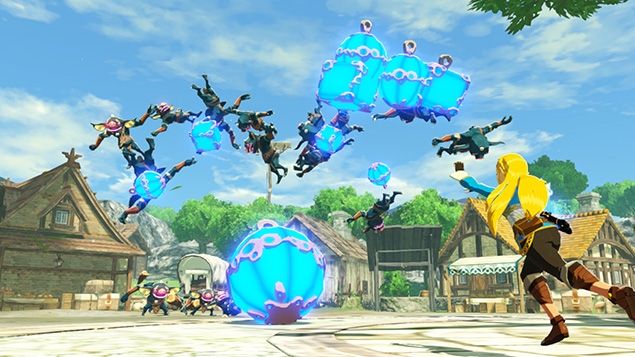 Another change is the addition of consumable elemental rod items, which are both scattered throughout the battlefields and dropped by tougher enemies. These can be used to stun enemies briefly and leave their guard gauge open. While I applaud the attempt to make the process of causing a guard gauge to appear to be a more proactive one rather than having players adopt a more defensive playstyle and wait, the rods are so limited in use that it feels less like a natural integration for gameplay and more like an option to hit fast forward on the combat for a few seconds.

If you happen to be showing up to Age of Calamity just looking for the opportunity to bash around several thousand monsters, then you’re certainly in luck, as the general combat is very much still functional. That said, it is a bit disappointing that neither the wands nor the runes really click as natural evolutions of gameplay, especially after the weapon triangle system in Fire Emblem Warriors did an excellent job of encouraging players to be more aggressive via smart unit placement within the natural flow of combat. As a result, Age of Calamity’s combat does feel a bit like a step down from its most recent Nintendo predecessor, which is a shame. 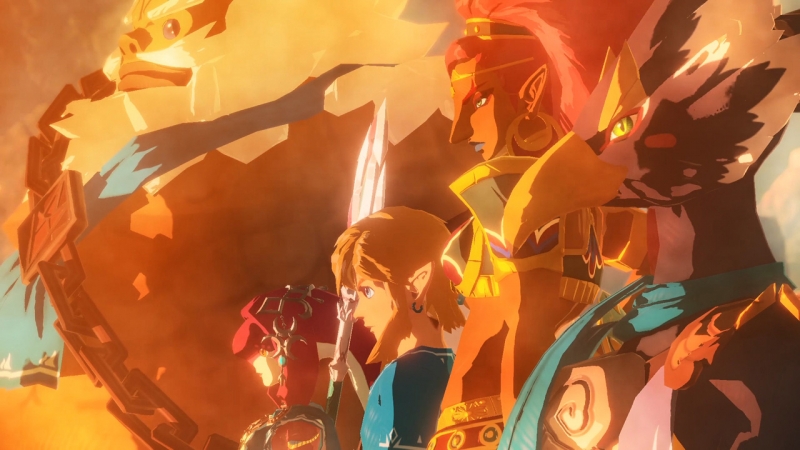 But many potential buyers are incentivized less by the inner workings of a Warriors game’s combat system and more by the opportunity to experience the backstory to Breath of the Wild. And it’s on this end that it’s worth considering the last, and perhaps most important trade-off: the setting itself. Designing a Warriors game as a prequel to a prior Zelda game rather than a crossover does allow for it to explore some really cool ideas, telling the tale of what happened leading up to the great calamity. A strong narrative and atmosphere haven’t really been present in Warriors games before. Conversely, however, it does mean sacrificing some elements that the prior two Nintendo Warriors games had, namely a roster featuring characters from a number of different past titles. Many fan favorites are gone; there’s no playable Ganondorf, Sheik, or Midna here. So Age of Calamity really needed to nail the story aspect in order to make sacrificing the myriad of other characters worth it.

Unfortunately, the narrative falls flat, which is primarily due to how it's structured. If you come into this expecting to “see first-hand what happened 100 years before Breath of the Wild,” as the official website advertises, then you’re going to be sorely disappointed, because a prequel this is not. Age of Calamity is an alternate reality/time travel plot focusing on a mini guardian that travels back in time to carry a warning of Calamity Ganon’s impending arrival. Instead of experiencing what happened in Breath of the Wild’s backstory, we instead get to witness Link, Zelda, and co. as they seek to undo most of what happened 100 years prior to Breath of the Wild. 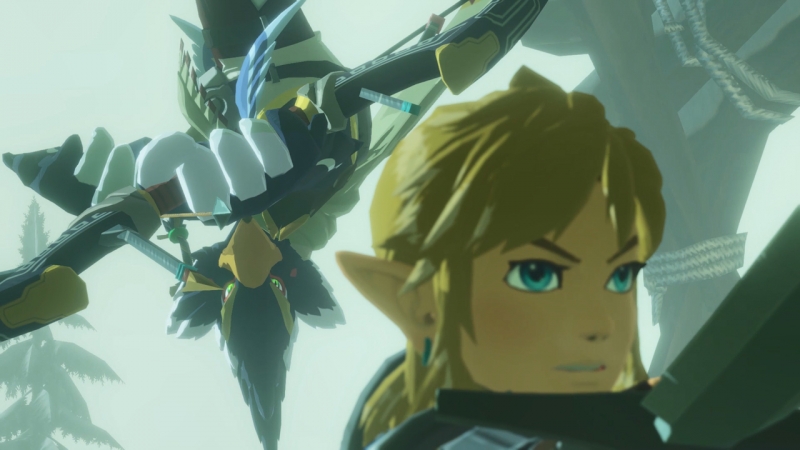 I don’t want to spoil any major plot points, but this choice ends up robbing what should have been an emotionally impactful story of almost all of its weight. The backstory of Breath of the Wild was a tragedy, but the time travel choice results in it being rewritten into something else entirely. I’m not sure if this is due to Nintendo feeling uncomfortable with releasing a full fledged game that had anything other than a happy ending, or if Nintendo wanted Age of Calamity to just be self-contained and not need resolution in another game, but the end result is that the emotional gut punch that should have come with a backstory as dark as the one in Breath of the Wild is completely gone.

But even taken on its own merits as an alternate “what if” story, rather than a prequel, Age of Calamity is still a let-down because it ultimately fails to accomplish anything meaningful or substantial with its setting. There aren’t many interesting interactions between previously established characters, the few new characters are one note and either don’t contribute anything to the larger lore of Breath of the Wild or actively detract from it, and the world isn’t developed or expounded upon in any interesting way. At best, I can call it an opportunity to spend some more time with the characters from Breath of the Wild if you’re desperate to do that, and at worst it’s an absolutely squandered opportunity to build upon and add context to the events of Breath of the Wild. The fact that this waste of a story is the reason why characters from Hyrule Warriors were scrapped is just the spoiled icing on top of the stale cake. 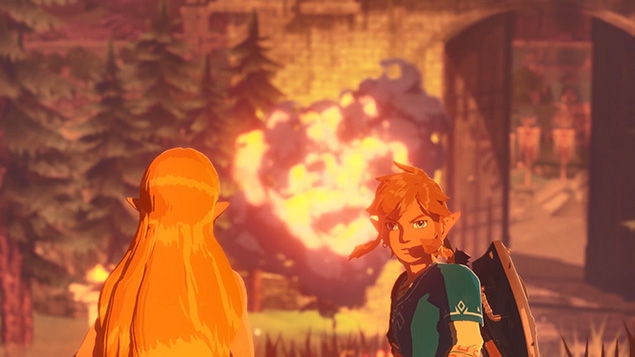 It’s difficult for me to view Age of Calamity as anything other than a significant disappointment and a notable step back. This is easily the worst of the three Nintendo Warriors games, and the most interesting element that could have set it apart is largely just wasted potential. Unless you're just desperate for any sort of BotW related content, I can't in good conscience recommend this. If you’re primarily interested in bashing monsters as Nintendo characters, the definitive edition of Hyrule Warriors has a far better variety of fighters, while Fire Emblem Warriors has a much better combat system, and both are available on Switch at a cheaper price. If you’re interested in the prospect of returning to the world of Breath of the Wild, Age of Calamity does nothing with it and just raises more questions than answers. I can't say I hate Age of Calamity, but I am saddened by it, and how little it did with the intriguing potential it had.

This review is based on a retail copy of Hyrule Warriors: Age of Calamity for the NS