The life of a medieval crusader was a difficult one. Spending months away from home, sent to fight in wars that you may not have believed in, occasionally being tossed into a temple filled with eldritch monsters that want to eat you alive, being resurrected over and over only to be sent to your death again and again. My history books couldn’t quite confirm that last one, but just in case it happens to be true, Dark Devotion is probably the best way to experience what it would have been like. Does it happen to be the best way to spend your money if you’re looking for a fun game, however? That idea is one I’m a little less devoted to. 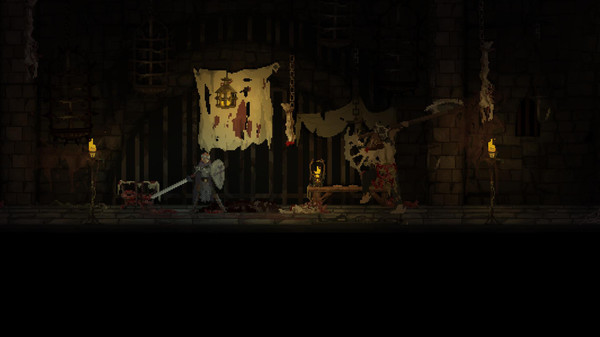 On a surface level, Dark Devotion has an interesting setup. You play as a nameless knight, who is part of a band of templars dedicated to a god and ridding the world of infidels. At the start, you are sent into a temple filled with monsters for a hitherto unexplained reason, and the ultimate reason behind you being sent there only becomes clear (or perhaps more accurately, not quite as vague) as the game progresses. To the game’s credit, there is some genuinely interesting world building here at points, especially towards the end of the game, although in standard Dark Souls fashion, Dark Devotion isn’t exactly eager to tell you anything.

I do feel like the lack of a coherent purpose from the get go does somewhat sabotage the game’s attempts at storytelling, though. Titles like the original Dark Souls and older exploration games like Metroid Prime are at least up front about some of the basics of the world and specifically what you hope to accomplish there, which allows for some leeway if the player misses out on some bits of lore. There’s still a coherent enough idea of the world in those games for the player to put random bits together with some degree of success. That doesn’t translate over to Dark Devotion, however, which means that you’ll probably feel very in the dark (pun intended) about what you’re doing for long stretches of time.

Gameplay-wise, Dark Devotion functions very much like a Souls game as well, with a branching level design, combat system that emphasizes stamina management and not being overly aggressive, and a genuine love for springing random traps to take off chunks of unsuspecting players’ health. Players can block, roll, and attack, all of which take stamina. Bosses are generally pretty creative and interesting to take on, with varied designs and movesets. It’s all functional enough Dark Souls gameplay, and if you’ve played a 2D Soulslike such as Salt and Sanctuary then you’ll probably feel pretty familiar here. 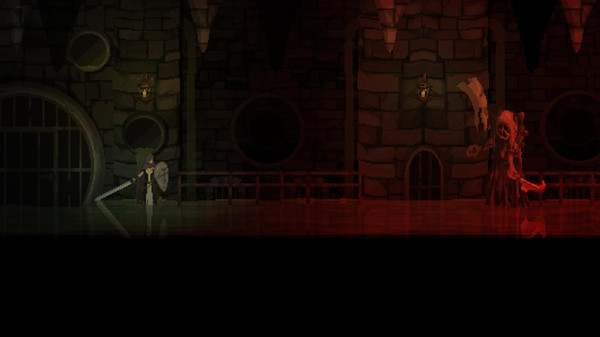 To be fair, there are some differences between Dark Devotion and the series it borrows very heavily from, it’s just that virtually all of them are stunningly bad choices. For starters, Dark Devotion has a roguelike component where you don’t get to keep most of the gear and weapons you pick up when you die. This means that, every time you die, you lose any additional armor or weapons you were using when you met your end, and instead you respawn in a weakened state.

As far as I can tell, which gear that you can permanently keep and which you can’t is random at least to some degree, which makes it very possible that you are essentially forced to use starting gear every time you respawn for a good chunk of the game. And if you’re on a particularly challenging section, such as a boss, then the real fun begins, because if you want to give yourself the best chance to win on any given attempt, you have to go back and grind for a better temporary weapon and armor. It creates a very frustrating feedback loop that reminded me of having to grind for blood vials in Bloodborne inbetween boss attempts.

Gear isn’t the only thing that lacks permanence in Dark Devotion, however. Progress in exploring is often dependent on finding various switches and exploring alternate paths to activate switches, and at this point you can probably guess that this gets reset upon death as well. Fortunately there are various warp spots that you can find around the map that allow you to teleport from the central hub area to them and last after death, but you're only allowed to have one open at a time, meaning that if you want to go back and explore a previously visited area then you had better be prepared to do a lot of backtracking. 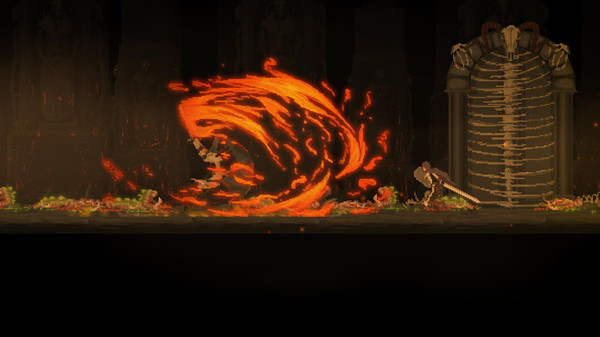 Artistically, Dark Devotion inspires a loud “meh.” The environments aren’t particularly varied, and even when things do change the lighting is generally so dark that it’s not especially noticeable. For all the talk about the game’s “hand-drawn aesthetic,” I found myself thinking that most of the character designs would have looked far more appealing if they were simply 2D sprites ala Super Metroid or Symphony of the Night. The musical variety is pretty bland as well and, with the exception of one mid game boss, doesn’t do much to deviate from the same tones.

None of this is a deal breaker by any means; there’s nothing in here that makes Dark Devotion a particularly bad game. Then again, there’s nothing that makes it stand out, and in a genre that’s become as crowded as Souls-likes have that may be a death sentence in and of itself. Dark Devotion is a perfectly mediocre game that is intriguing in some places and boring in others, fun in some places and downright annoying in others. There’s nothing that elevates it above its competition, and as a result it’s hard to recommend unless you’ve extensively played the Souls-like genre and are desperate for anything new.