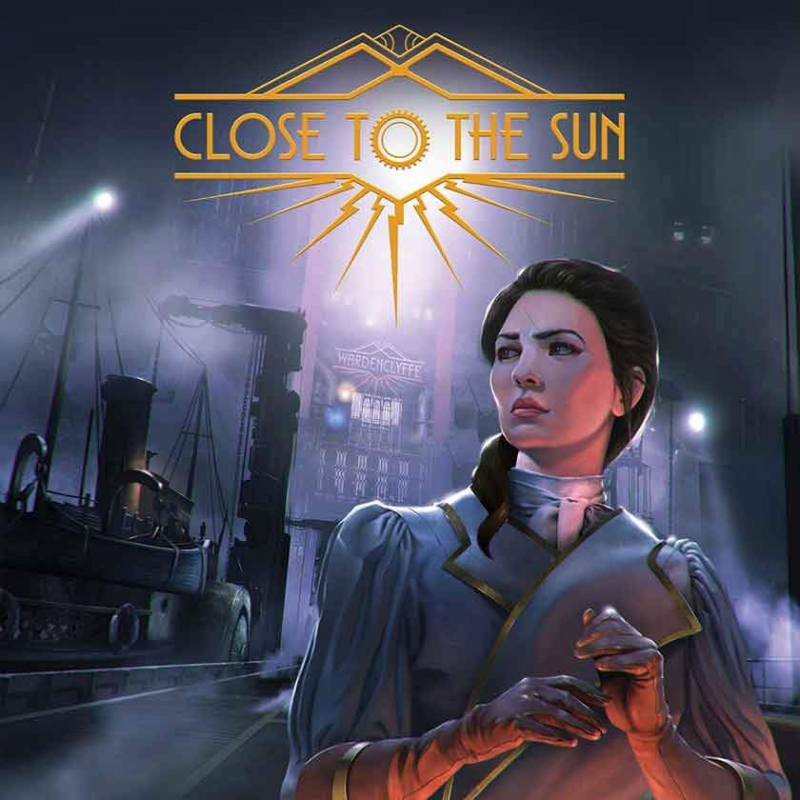 Storm in a Teacup

Close to the Sun (XOne)

Close to the Sun (XOne)

Leave it to a game focused on Nikola Tesla’s boundless imagination to seldom demonstrate the same kind of inventive spirit.

I'll be the first to admit I hated Storm In A Teacup’s first effort, N.E.R.O.: Nothing Ever Remains Obscure.  Yes, the full title intentionally has a period followed by a colon.  For a game that dawdled the line between first-person walking sim and puzzle game it was a tragic example of both genres, committed to a hollow fantasy tale and obtuse dilemmas that rarely felt engaging.  So, the obvious question comes up: what perked my ears for their next project?  The simplest answer comes back to the promise of their obvious BioShock inspiration, down to the premise, aesthetic, and setting.  Perhaps after a few years—and a pair of smaller games— their next narrative-focused experience could be something special.  And while Close to the Sun is a marked improvement in several respects, it never reaches the ambitious heights its inspired title would suggest.

The year is 1897.  Alternate-universe Nikola Tesla has amassed immense wealth which has enabled him to create “The Helios,” a utopia on the seas capable of housing all of the brightest minds of his age.  You take control of Rose Archer, a hard-nosed journalist who’s been invited onto the ship after receiving a cryptic message from her sister, Ada.  Upon arrival, things quickly take a turn for the worse. 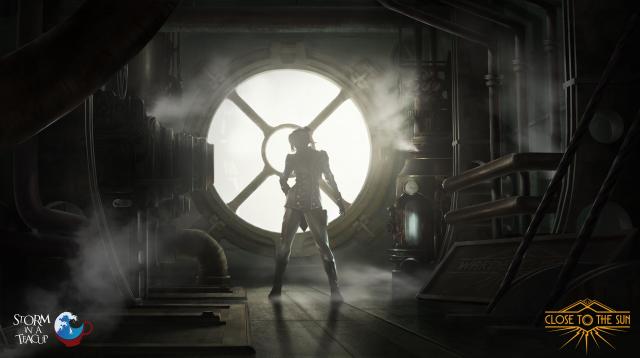 Although I admit that the BioShock allusions were a great pull for me, I didn’t expect Sun’s premise to be a carbon copy.  Even listing them out sounds so familiar: the framing device of a singular person venturing into a steampunk world sprung from the mind of a worshipped billionaire, said figurehead’s goals of creating a space for the brightest minds to have unrestrained freedom in their intellectual pursuits, the hallways of this utopia now littered with fresh corpses, the art deco stained with blood, radio-com chatter from this leader suspecting you as a spy - you get the idea.  Sadly, no “Helios can be yours as well” style of speech to be found.

While I don’t begrudge utilizing prominent figures in alternate-history settings, it’s a shame how often games relegate them to glorified props.  Andrew Ryan became iconic by harnessing Ayn Rand’s philosophy and challenging it through him and his fallen utopia.  Nikola Tesla was an actual person with actual beliefs that could’ve been suffused into the world beyond a muddled message about scientific ambition.  Granted, there is an ecological theme touching on energy overconsumption; yet, it’s treated as an immaterial afterthought later on.

The first few chapters (including a prologue) is where Sun shines brightest.  Before the first scripted chase scene, the sense of dread and abandonment feel so palpable—to the point of me legitimately being affected by some jump-scares.  And while it may strike some as schlocky or “cheap,” it does a good job of keeping one’s attention affixed to the world building to disinter in The Helios’ halls.  Scouring collectibles and momentarily going off the beaten path felt gratifying whenever the opportunity presented itself.  I’m a sucker for what-if stories and these writers did a solid job in answering questions such as how other nations react to Tesla tempting their scientists or the nefarious plots Edison employs in this circumstance. 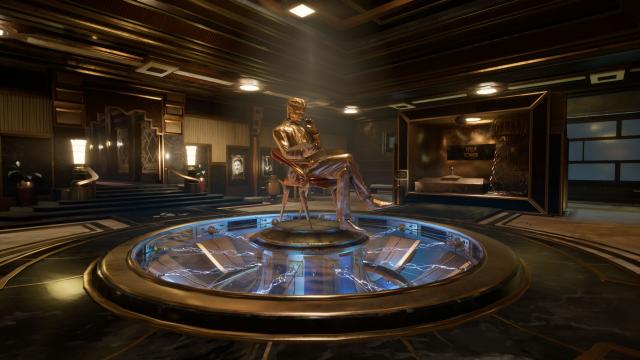 The train veers off the track after the successful buildup, though.  Aside from some good dialogue early on, there’s not much of a tangible connection to feel between Rose and Ada.  The story also delves into time-travel and (potentially?) multiple universes, yet fails to put the proper emphasis behind them.  Matter of fact, that's the key reason Sun doesn’t get a proper ending.  It’s reminiscent to The Order: 1886 in this regard: a big setpiece that feels like a decent way to cap a 2nd act and move forward is actually the dénouement.  It’s the most flagrant sequel-bait of this year!

I hope the beginning doesn’t fool anyone else like it did me.  It’s weird to admire so many interlocking parts there to then witness it unspool into a mess.  It’s even sadder when considering the select voice acting talent was oftentimes exceptional.  I will admit the psychopathic supporting antagonist was the weakest, but he also had the least screen time; conversely, unknown VA Emily Moment did a great job assuming the mantle of Rose.  But effective presentation can only go so far with a script whose problems continue to mount towards the finish line, and that rushed ending made me want to hurl the script into the sun. 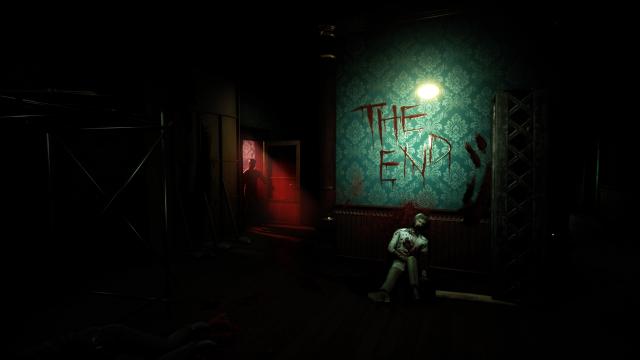 Gameplay has a similar arc in excitement.  Like several of its contemporaries, Sun occupies a weird space in the walking sim/narrative exploration subgenre.  But instead of honing in on particular aspects, like say Firewatch’s conversational nuances and wilderness exploration, what’s left is a hodgepodge of some horror and puzzle moments.  It doesn’t feel that confused at the beginning either.  It’s easy to castigate this style of game outright, but there’s good intention in carefully building up the atmosphere and wandering around to pick up ancillary collectibles.  The build-up works to give story and world-building the most attention.  But then more puzzles become incorporated and there’s rarely any sense of challenge.  Only one comes to mind that deserves to not be called a “puzzle” in condescending fashion.

The times Sun’s horror affected me has a lot to say about these botched mechanics.  Contrived as they often are, early jump-scares worked because I was constantly reminded of just how disabled I felt against any potential threats.  They come and go without lingering.  Compare that to the sporadic chase scenes; supposed tension-builders with an inflexible attitude towards mistakes.  When there’s a fork in the road and the correct choice is essentially a coin toss.  There’s also a stealth section that demands your attention for about two minutes and feels completely useless.  The longer your time on Helios the duller these monsters’ teeth become.

In short, this gameplay foundation exemplifies why “walking sims” get a bad rap.  Rather than balancing between player interaction and immersive storytelling, Sun slips off the trapeze and smashes against some rakes while trying to escape the spotlight. 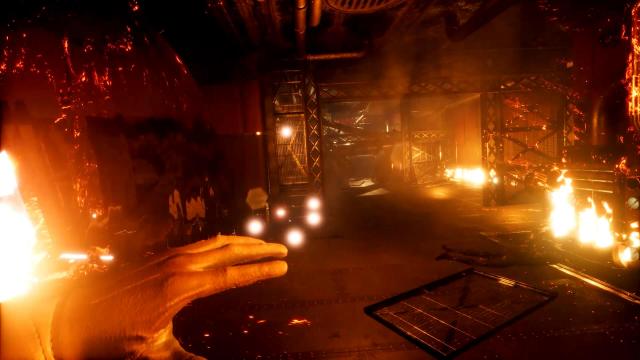 As rough as I’ve been against certain qualities, it’s a shame to say because of how great Sun often looks and sounds.  Storm In A Teacup have managed to expand beyond a more typical fantasy look from N.E.R.O. and into a nuanced ‘electro-punk’ aesthetic that’s inspired by BioShock but which has its own unique character.  It’s also great how the fleshed-out, disparate areas of The Helios click together.  There’s a magnificent theater hall and museum that’s easy marketing screenshots; and yet, just as much time is spent navigating through The Helios’ engine rooms.  All of which is complemented by an appropriate and multifaceted sound design.  I came away remembering more of the visual/aural journey through this ship than I can recall particulars of the plot—even just a couple days separated from it.  If there is one quasi-criticism to be had it’d be Andrea Remini’s too-discreet soundtrack compared to the liveliness of her sound-effects work.

Value is another clear-cut example that harms Sun’s outlook.  There's a $30 standard asking price with the potential of netting five hours, if you're lucky.  And while I do like to emphasize design, long-lasting story moments, etc. before dryly calculating whether the cost meets a certain threshold, that doesn’t even apply here. Its steep cost feels insulting when considering that’s for the game… but not for a complete story.  Even the temption of missed collectibles is deflated because of that. 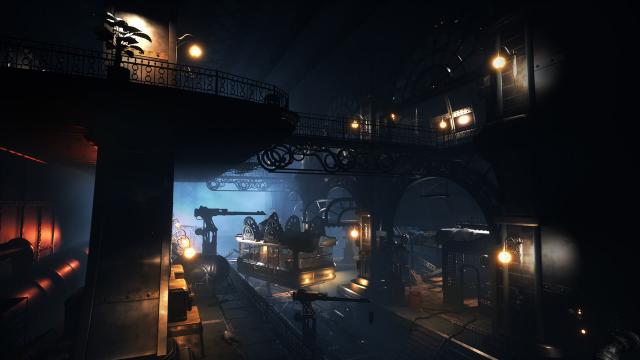 With some woeful design decisions, dangling plot threads, and a distracted core identity, Close to the Sun loses initially-gained traction.  There are great concepts on display and almost each presentational aspect showcases quality technical craftsmanship.  Sad as it may sound, their sophomore attempt at this specialized genre shows clear improvements from what they’ve crafted before.  Yet it’s still far away from the titans who are able to incorporate player agency and interaction in a more fulfilling way.  Less the story of dauntless ambition burning the development team's wings than their wings cramping up halfway to the destination.

This review is based on a digital copy of Close to the Sun for the XOne, provided by the publisher.