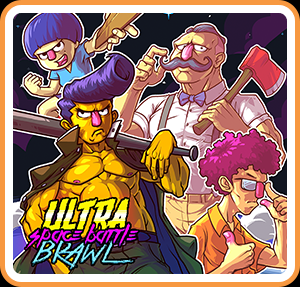 With a name like Ultra Space Battle Brawl, you know what you're getting: over-the-top competitive action. What's not so obvious from the name is its inventive mixture of mechanics from sports titles and 1v1 fighting games; it's essentially Pong crossed with Street Fighter. While that sounds fun on paper, the premise never makes a successful jump to reality. Despite its hybrid mechanics, interesting soundtrack, and colorful neon pixel art, Ultra Space Battle ends up a shallow, unpredictable arcade action game that's moderately entertaining only in short bursts.

Ultra Space Battle Brawl is something like an outer space tennis match played without a net. Along a 2D plane, two fighters (four if you play doubles) smack a ball back and forth, attempting to strike the opponent's prism on the far side. Protected by chibi-chicken versions of each fighter, these prisms double as life bars. Subject one to too much punishment and it's round over. Take two rounds and you've won the match. 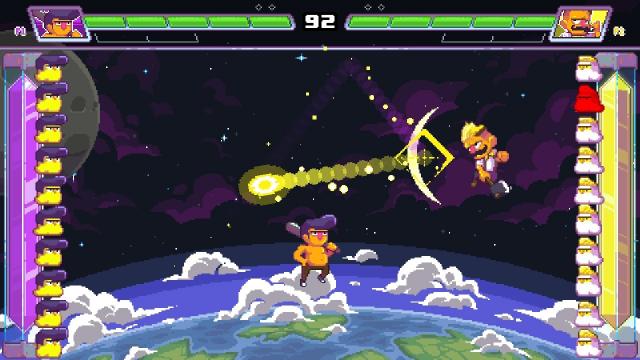 It's an easy concept to understand, paired with accessible controls. Each fighter can move around the map vertically and horizontally, swing with the Y button, dash with the B button, and perform a unique "Ultra" skill with A, which can often turn the tide of a match. Ultra skills include a doppelganger effect, which creates a double of a fighter; a swarm of bees, which redirects the ball backwards; and a deployable shield that reflects any opposing shots.

The problem is that this initial acceSsibility never gives way to a deeper, more rewarding game. Yes, there are ten playable characters, each with specific stats informing power, speed, attack range, and attack speed, but a diverse roster doesn't make up for shallow mechanics that lose their novelty after only a few sessions.

It hurts too that it's often difficult to line up precise angled shots or even predict where the ball will go — especially as matches drag on and the ball picks up speed. Ultimately, Ultra Space Battle Brawl doesn't work as a deep 1v1 fighter, since it's missing deep movesets and combos, and it doesn't exactly work as a simple pick-up-and-play arcade sports game, because of its lack of predictability.

Despite any mechanical shortcomings, Ultra Space Battle Brawl supports a handful of interesting modes, including a single player campaign, complete with backstories for all ten characters; and a bunch of local multiplayer options, among them 1v1, 2v1, and 2v2. A story-based campaign, in particular, is a nice addition. None of the plotlines are especially riveting, but they're different and weird enough to hold your attention. Nyammo, a tomboy who destroys Earth infrastructure to make space for homeless cats, is just one of many wild characters you'll meet on your journey across the Milky Way. 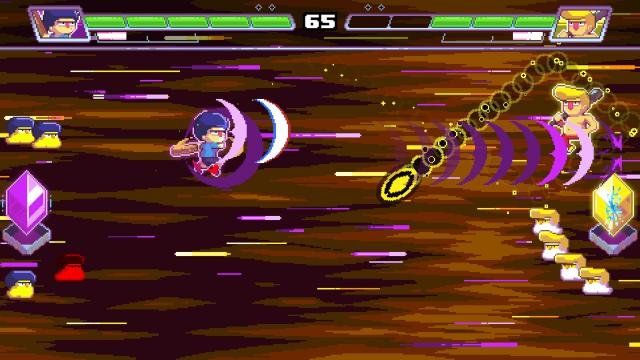 If Ultra Space Battle Brawl was judged only on its artistic merits, it would score much higher. Its neon pixel art, inspired by 80s Japanese aesthetics, is colorful, detailed, and bold. Its soundtrack, a mix of funkot (Indonesian house music) and 80s synthwave, is eclectic and groovy. There's a lot of love for the 80s and 90s arcade scene on display here; in fact, anyone familiar with Ryu's cinematic entrance in Super Street Fighter II will immediately recognize this game's opening.

Art direction and sound design can only take you so far, however. While Ultra Space Battle Brawl has some intriguing characters, accessible controls, and a decent story mode, it simply wears out its welcome far too soon, thanks to shallow mechanics and gameplay that often feels too erratic and random.

This review is based on a digital copy of Ultra Space Battle Brawl for the NS, provided by the publisher.