Big brains in a small package.

A towering robot looks over the crumbled skyscrapers of a once grand metropolis. "Humanity: Destroyed. Vek Threat: Unstoppable. Mission: Failed." States an AI, coldly. "Open a breach. Time to go back and try again." Replies a grizzled pilot. Short and sweet, this introduction frames the commencing game aptly. The alien Vek have reduced civilization to a few densely packed islands with humanity on the brink of extinction. It's up to your small band of fighters to manipulate dimensions and save as many timelines and billions of lives as you can.

Into the Breach, the follow-up project to FTL, is Subset Games' next minimalist roguelike strategy game. A charming 16-bit art style, turn based structure, and small grid maps hark back to forefathers like Advance Wars, but turn the formula on its head in a number of stimulating ways. 3 battle mechs and a little science are all you get to turn back the insect menace and protect the remnants of society across dozens of encounters. Lose a mech and you'll get it back for the next fight, but its pilot takes their experience to the grave. Lose too many buildings on the map and it's game over for that timeline; better luck next time. You have various weapons and abilities at your disposal to kill your enemy, but wits and planning are the real keys to victory. 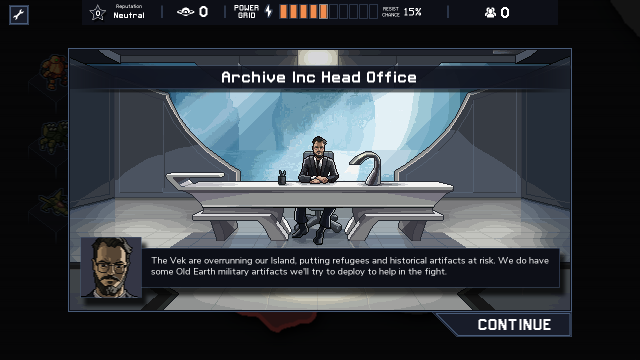 Hand to claw brawlers, direct fire tanks, arcing missile launchers, nimble flyers, scientific support; your mechs come in a variety of shapes, sizes, and capabilities. Be careful, though, because the Vek are equally diverse, threatening, and outnumber you. At first you'll want to take the fight right to them and do as much damage as possible, but soon the brilliance of the game will emerge. The enemy are often too many, too resilient, and too close to innocent bystanders for such a direct approach. Soon you'll realize that positioning and manipulation are far more important to success, and suddenly the possibilities widen before your eyes. Each turn the Vek move and telegraph their next attack to be completed after your turn. What if you pushed them out of the way of that building, or into an environmental hazard? What if you took advantage of the turn order and lines of fire to make them kill each other?

Think hard and get creative, because you only get one move and action per mech in a turn, one turn reset to fix a single mistake per battle, and no checkpoints to fall back on. More Vek surface frequently, so you'll need to manage numbers and try to plug emergence holes with other enemies or your own mechs in time - assuming you have the positioning or health to do so. You won't always be able to save every structure, so you'll also need to deliberate which actions will prevent the most harm in the long run, even if it means sacrificing a building or two yourself. No pressure.

Each battle provides opportunities to fulfil certain parameters (like protecting certain targets or killing enough bugs) that reward you with either infrastructure repairs or 'reputation', which acts as currency to repair it yourself or upgrade your mechs. Occasional time pods sent from the future to help you also yield rewards if you manage to protect them. Experience gained by pilots, new weapons and abilities bought or acquired, and reactor cores to power them make your mechs more capable, but these finite resources are yet another factor that must be weighed and distributed with care. 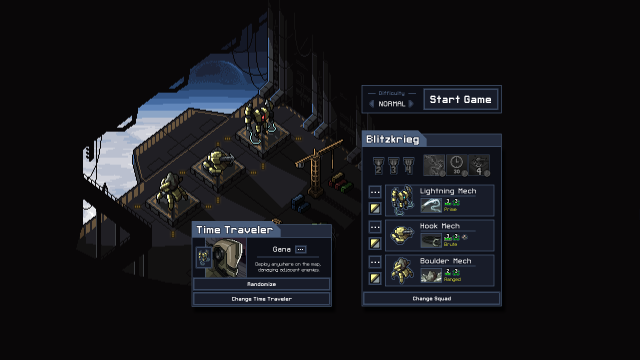 Despite the game's unforgiving nature, the challenge and pace are very well tuned. The normal difficulty setting will give your brain a good workout without making you feel overly desperate or weak. Don't get careless, though, or things can collapse in a hurry. Randomization keeps things fresh and rarely did I feel cheated by it like you sometimes find with games that employ it. You can make a run shorter or longer by tackling two, three, or four islands before making your final stand and the game will scale your opposition accordingly. The progression trickles out enough new enhancements that you don't feel overpowered early, get too little time with your favorite new toy, or feel starved for new content. Playthroughs can be speedrun in under an hour or carefully considered for several depending on how much you want to take on.

A single campaign is a relatively short burst of fun, but that's just the tip of the iceberg; the replay value is sky high. New pilots and mech squads dramatically change the game and force you to rethink the way you play. It becomes a dare to unlock and conquer the Vek with every one. When you're done with that, you can mix things up even further with custom or randomized squads from the options you've acquired. Even after several runs on my desktop I find myself booting the game up in my spare time on my laptop to continue the trek (it's begging for tablet and handheld versions). Particularly with how small and light it is - this is one game you may never want to uninstall. 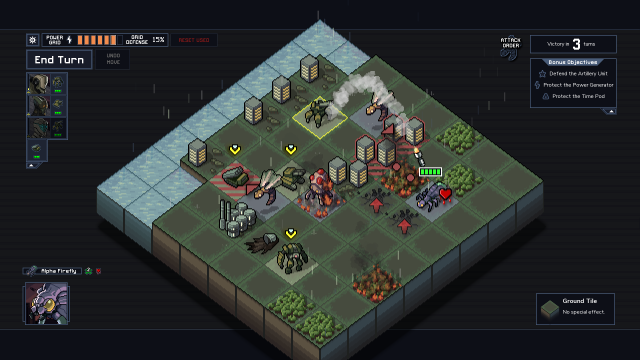 Aesthetically and technically, ITB is an interesting fusion. Colorful, low resolution sprites with cartoon art styles belie the grim state of the world and hard decisions to be made. A compelling yet unobtrusive, if small musical score lets you concentrate on your moves while setting a stoic mood. Story is sparse, limited to brief remarks to provide context or commentary on your actions, keeping the focus on gameplay. The game takes clear inspiration from both Eastern and Western works of giant robots and monsters and melds them together in a format you wouldn't expect to find them in.

Despite the hours you can put into the game, it's impressively lightweight. At less than 200MB in file size with fast and easy drops in and out of the application, efficiency is yet another strength and the game should have no trouble running as intended on low end systems or any other platform the developers want to take on. Subset Games is establishing a legacy of simple elegance that few others can match.

Into the Breach is as much a puzzle and chess match as a tactics game. Its challenges can leave you scratching your head and debating your every move for ages, but the moment you find the solution to a seemingly impossible predicament is elating. Its simple appearance hides immense depth and value. Tight, lean, and expertly crafted, rarely is so much accomplished with so little. It's an easy recommendation for any fan of strategy or brain teasers and worth every penny.

This review is based on a digital copy of Into the Breach for the PC, provided by the publisher.