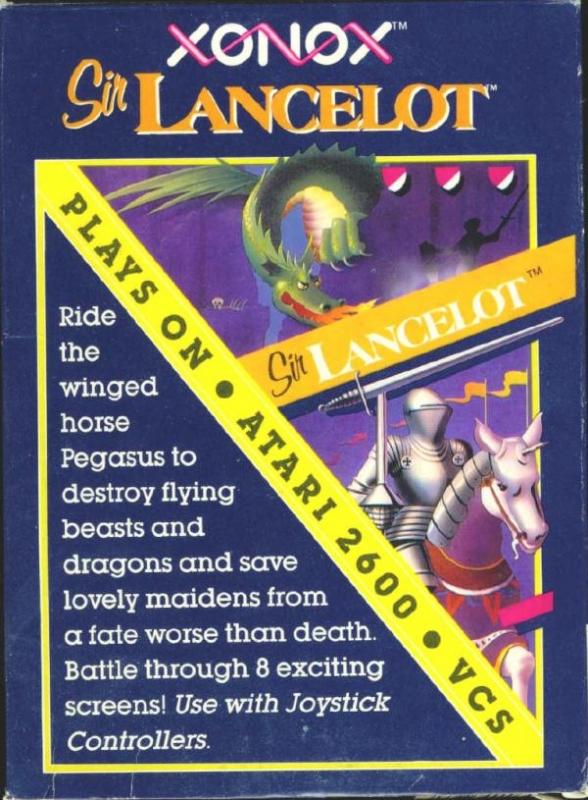 Sir Lancelot is a very rare action game made by Xonox. You play as Sir Lancelot. He rides on a bird to take down the evil green monsters of the skies.

Graphics - Don't expect great graphics from a eighties game, but they are somewhat decent. The backgrounds of most of the levels are just two mountains, and most of the skies are blue. Most of the monsters in the game are flying green monsters.

Music - The only music in the game is when you kill an enemy, or when you get killed. Both of them are very annoying. I had to turn down the volume to zero because I was getting a headache.

Gameplay - The game takes place on a large field with two mountains in the background. You start out in front of a building, on your bird and ready for battle. You will see several flying green creatures who only flies in a straight direction. To kill them, you must fly at them very fast and land on the top of them or poke them with your lance. It's kind of like Joust, only that speed plays a important factor.

You even get to slay a dragon in this game. The battle takes place over a shiny pit, land on it and you die. If the dragon manages to hit you a with a fireball, you will get stunned, and you might fall into the lava. To kill the dragon, stab it with your lance very fast.

Difficulty - The first two levels are easy enough, but the third level...oh boy. The monsters move extremely quick, so stabbing them with your lance is very hard and so is landing on them. Slaying a powerful dragon was easy, but fighting a bunch of tiny green monsters is harder.

Overall - This game is repetitive and gets very boring fast, since nearly all the levels are the same. It's no where compared to Joust, but it's still a must have in your Atari 2600 collection due to its rarity. Good luck fighting those little green devils.