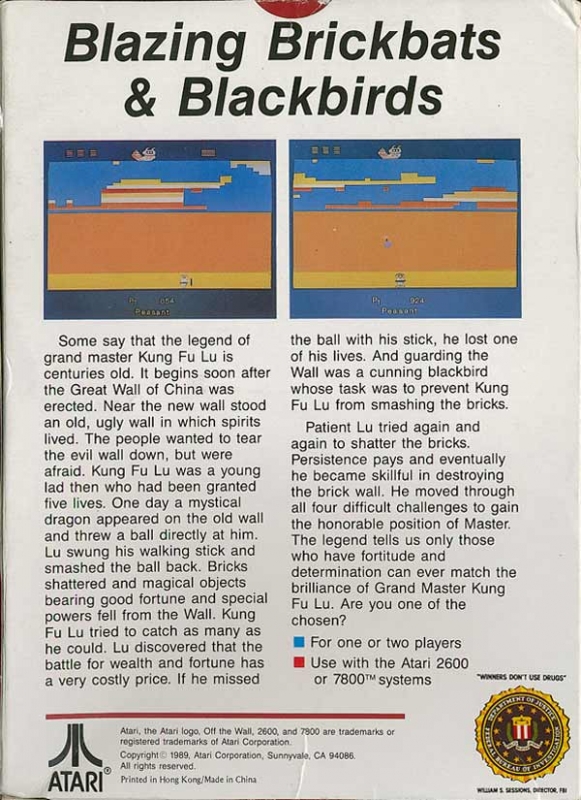 Off The Wall - Summary

Some say that the legend of grand master Kung Fu Lu is centuries old. It begins soon after the Great Wall of China was erected. Near the new wall stood an old, ugly wall in which spirits lived. The people wanted to tear the evil wall down, but were afraid. Kung Fu Lu was a young lad then who had been granted five lives. One day a mystical dragon appeared on the old wall and threw a ball directly at him. Lu swung his walking stick and smashed the ball back. Bricks shattered and magical objects bearing good fortune and special powers fell from the Wall. Kung Fu Lu tried to catch as many as he could. Lu discovered that the battle for wealth and fortune has a very costly price. If he missed the ball with his stick, he lost one of his lives. And guarding the Wall was a cunning blackbird whose task was to prevent Kung Fu Lu from smashing the bricks. Patient Lu tried again and again to shatter the bricks. Persistence pays and eventually he became skillful in destroying the brick wall. He moved through all four difficult challenges to gain the honorable position of Master. The legend tells us only those who have fortitude and determination can ever match the brilliance of Grand Master Kung Fu Lu. Are you one of the chosen?