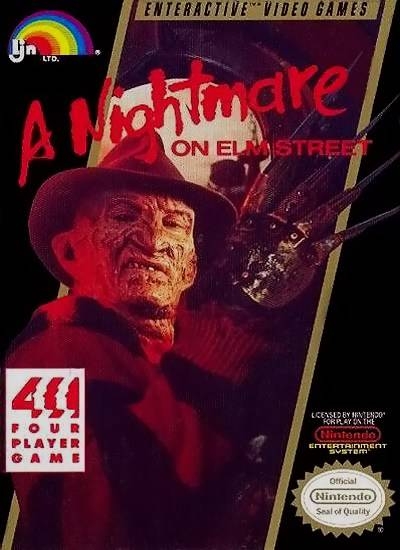 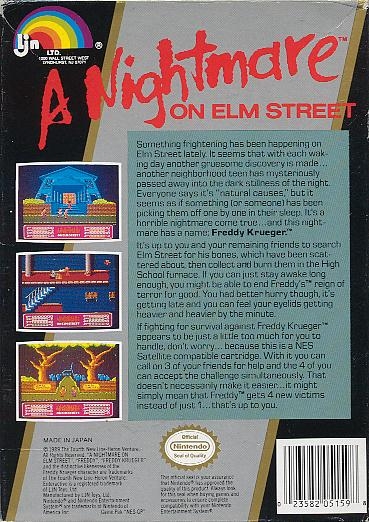 A Nightmare on Elm Street (NES)

A Nightmare on Elm Street - Summary

Something frightening has been happening on Elm Street lately. It seems that with each waking day another gruesome discovery is made... another neighborhood teen has mysteriously passed away into the dark stillness of the night. Everyone says it's "natural causes," but it seems as if something (or someone) has been picking them off one by one in their sleep. It's a horrible nightmare come true... and this nightmare has a name; Freddy Krueger.

It's up to you and your remaining friends to search Elm Street for his bones, which have been scattered about, then collect and burn them in the High School furnace. If you can just stay awake long enough, you might be able to end Freddy's reign of terror for good. You had better hurry though, it's getting late and you can feel your eyelids getting heavier and heavier by the minute.

If fighting for survival against Freddy Krueger appears to be just a little too much for you to handle, don't worry... because this is a NES Satellite compatible cartridge. With it you can call on 3 of your friends for help and the 4 of you can accept the challenge simultaneously. That doesn't necessarily make it easier... it might simply mean that Freddy gets 4 new victims instead of just 1... that's up to you.

If you and your friends are going to survive, you're going to need to call on the powers of The Dream Warriors. By finding icons hidden in the dream world, you can access powers of warriors like...

The Shinobi:
Like the dreaded Ninja warriors of ancien Japan, this dream warrior is a master of the martial arts and delivers his lightning-fast attacks with devastating effects.

The Acrobat:
Taking the old proverb "If you can't beat 'em, dodge 'em" to heart, this dream warrior relies on a collection of stunning acrobatic maneuvers to keep out of harms way.

The Necromancer:
Styled after the great magicians of times gone by, this dream warrior can conjure up mystical energies and channel them into amazing superhuman powers.