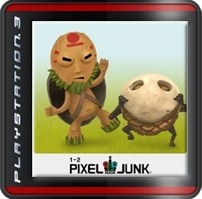 "It’s quite easy, at first, to put Monsters off as a simple clone of games before it, but despite the familiarity some may have with the genre, it does offer a unique and rather endearing experience."

Inspired by the popular and addictive "tower defense" genre, PixelJunk™ Monsters takes the simple real-time strategy concept of building, researching and base defending and presents it in a uniquely attractive style. With meticulously hand-drawn 2D art, PixelJunk™ Monsters recreates the look of a classic with crisp graphics designed for optimal viewing in Full 1080p HD.

In PixelJunk™ Monsters, the player controls a defender-of-the-forest character in a lush 2D environment. The player's goal is to strategically defend the pathway to his homebase from an onslaught of various threatening monsters. In between waves of monster attacks, the player scrambles to reinforce his defenses by collecting gold coins and jewels from fallen enemies to finance new towers and research deadlier weapons. Eventually, the player can harness the elements throughout the 20 different stages to cast lightning storms across the forest. Gamers can enjoy PixelJunk™ Monsters with a friend in offline co-op mode, which requires careful strategy and communication. Additionally, PixelJunk™ Monsters will support online leaderboards for both 1p and 2p co-op.

PixelJunk™ Monsters is the second game in Q-Games’ PixelJunk™ series for PLAYSTATION®Network.