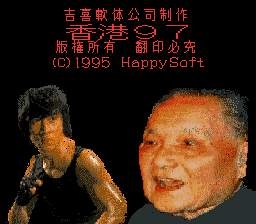 Hong Kong 97 was made by a bunch of assholes at a developer called Happy Soft in 1995. If you're curious, and you should be, Happy Soft were a group of home brewers, rather than a "formal" developer. Given the constraints put by Nintendo and other console publishers, it's really a noble effort on Happy Soft's part that they put in all the work to make actual Super Famicom cartridges and everything on their own. Unlicensed and pirated games were pretty common the world over on the NES, Famicom, and even Gameboy, but their numbers greatly dwindled in the 16-bit era.

At any rate, many Japanese fan sites rate this as one of the most notable examples of a "kusoge" (translation: "shit game", and refers to games that develop cult followings because of how horrible they are and also what exactly makes them so horrible.) I started it up, expecting a campy bunch of campiness, or whatever, like you would find in Cho Aniki, or Urban Yeti, or even Hoshi wo Miru Hito, or any other game that earns the reputation of being an example of kuso-ge. What I found speaks for itself.