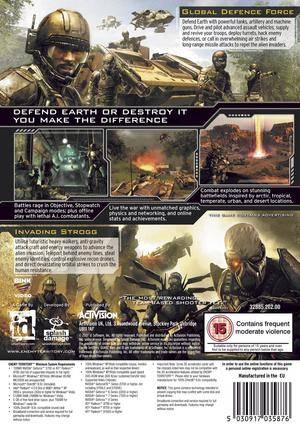 Enemy Territory: QUAKE Wars™ is the ultimate online strategic shooter. Taking place in the year 2065, the game lets you play as the GDF or Strogg in one of five unique character classes, either online or offline with computer controlled AI teammates and opponents. Employing an arsenal of weapons, vehicles and deployable armaments, engage in an action-packed test of skill and coordinated teamwork through a series of combat objectives. Persistent character growth and achievements reward players for teamwork, while clearly defined mission and class objectives guide new players to meaningful contributions on the battlefield.

• Combat focused on key Capture, Construct and Destroy objectives, but open-ended to allow limitless strategy and improvised missions and tactics.

• Complete individual assignments and objectives to gain experience and rank during a single mission or an overarching campaign of three linked missions.

• An array of land, sea, and air vehicles, with multiple combat positions including driver, gunner, passenger and even commander.